‘Tis the season to be binging, am I right? Let’s face it – amidst the entertaining and bettering oneself by reading, cooking, baking (seriously, what’s the big deal with banana bread?), exercising and so on, surely this is also a really good time to quarantine and chill? I’m not advocating for spending ALL of your time on Netflix, but hey, if you need a distraction from all the madness, I happen to have a few amazing recommendations. This also gives me the chance indulge my passion for one of my favourite things! I’ve been a cinephile for the most part of my life (fashion was actually my second love, *gasp*), and in recent years that has expanded onto series, given the glitzy makeover these have had.

Also, this wasn’t a premeditated decision, it just so happens that all of these shows are female-led – which I love! Maybe I’m just subconsciously drawn to storylines with strong female characters? So if you need a dose of female empowerment (of course you do) combined with some good old escapism, check out these six amazing shows – just don’t be surprised if you do end up having a bit of a binging session. 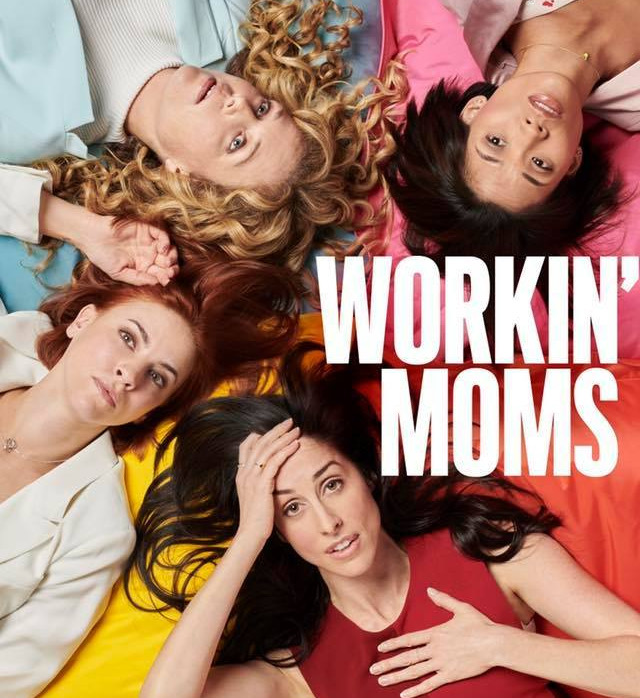 I discovered this thanks to blogger Hannah Gale, who mentioned it in her Instagram stories a few weeks ago – I watched one episode and was hooked from the get go. The show is the brainchild of Catherine Reitman and her husband Philip Sternberg (who also star in the show as husband and wife – so cute! Not to mention #couplegoals). Being the daughter of filmmaker Ivan Reitman (Ghostbusters, anyone?), it’s fair to say Catherine Reitman must have a few funny bones, and plenty of talent, in her body. Based in Canada, a basic way I would describe this comedy series is a hint of Sex and the City with babies. And no, you don’t have to be a mum to like it as it’s absolutely hilarious. Raunchy and probably very relatable for mums, the show so far has featured 3 series consisting of 13 episodes. Perfect for millennial brains and busy mamas!

I literally had to pace myself and stop watching every season in a week as I knew I would feel a deep void once I finished it. Luckily season 4 is coming out in May – and all I can think about is what am I going to do when that ends… 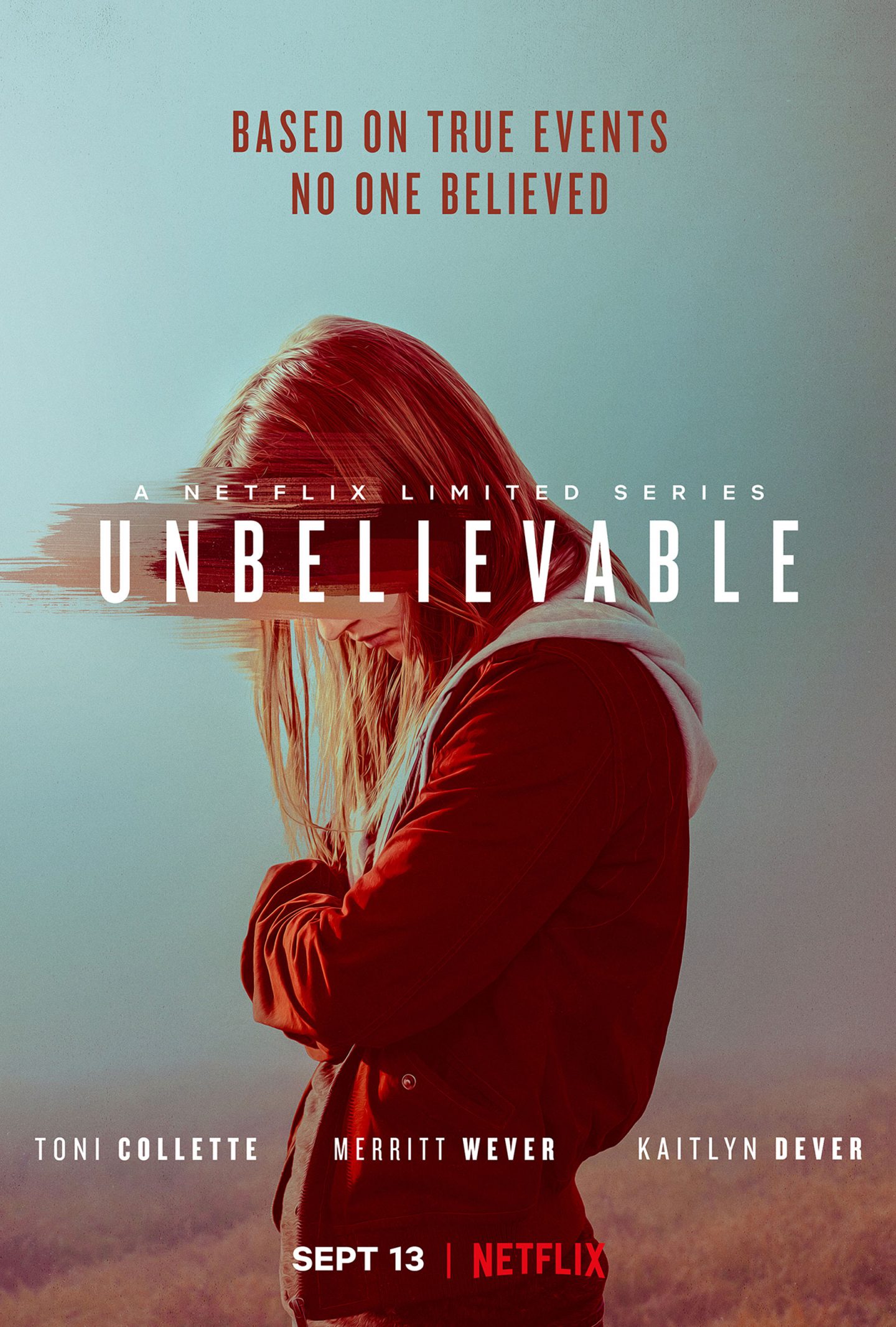 If there was any hype around Unbelievable (there really should have been), which came out at the end of 2019, I completely missed it – I only came across it because Netflix was suggesting it to me.

I love Toni Colette and absolutely adore Merritt Wever – so I knew it wouldn’t disappoint. Based on true events, two female detectives are fighting against all odds to hunt down a horrifyingly precise serial rapist. The story also showcases the achingly cruel backlash that one of the victims faces – making it a compelling and heartbreaking narrative. A hard watch at times, but this limited crime series is so damn good thanks the gripping storyline and amazing performances from both the leads and support cast.

Episode duration: under an hour.

Binge-ability: as the subject matter is harrowing, one episode a day is probably enough. However, it is still very gripping. 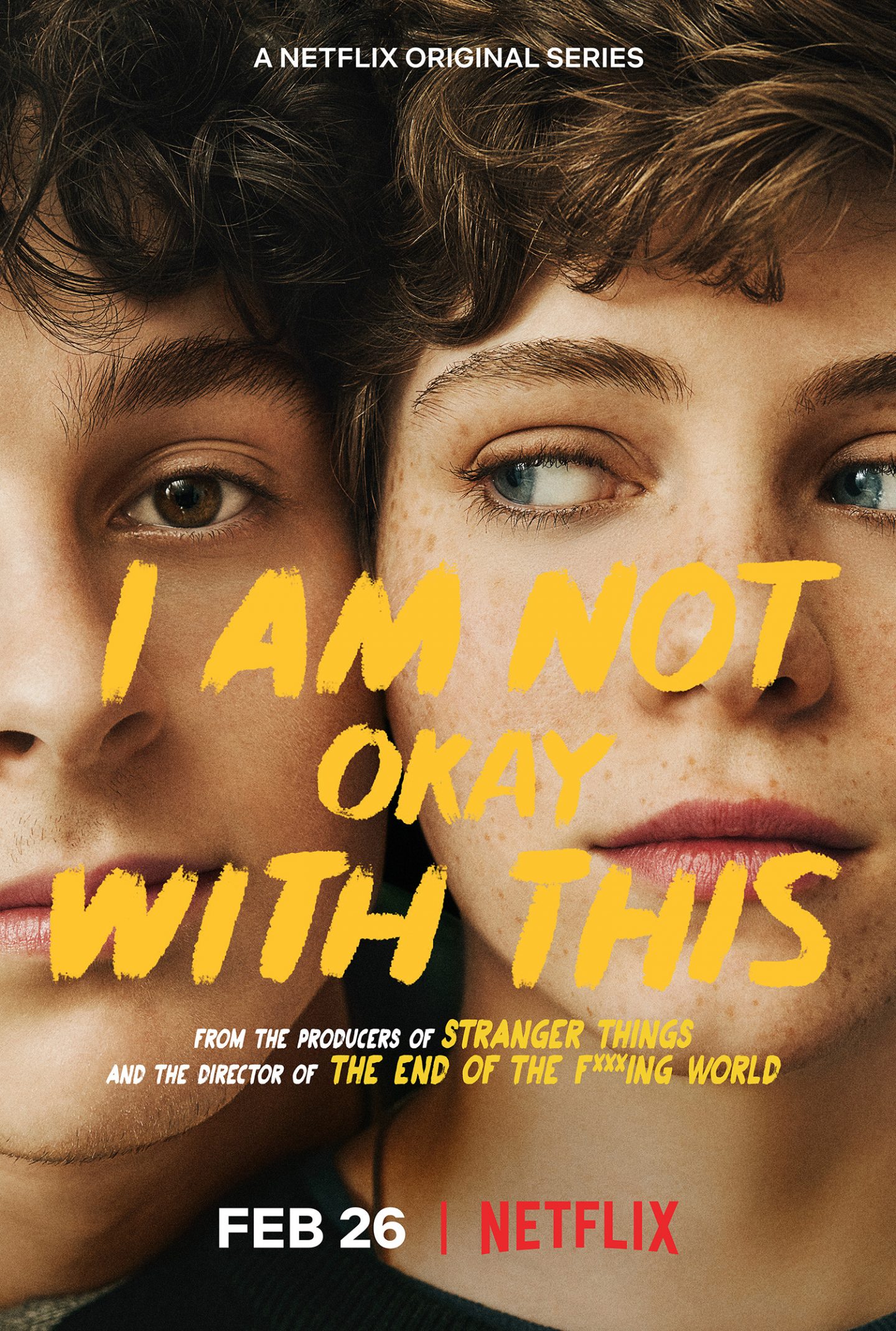 Maybe I’m cheating a little with this one, as it stars a young girl and is possibly aimed at a younger audience, but it’s amazing nevertheless! The fabulous Sophia Lillis (known for her roles in It and Sharp Objects) brings teen angst to a whole new level in this story about a socially awkward 17-year-old who’s having to cope with love, friendships, sexuality, the death of her father… and increasingly dangerous telekinetic powers. I don’t care that I’m maybe a decade (and a half?) too old for this series – it’s both funny and sad and has an irresistibly charming old-school superhero comic book feel… It is after all based on the graphic novel of the same name by Charles Forsman. I devoured season 1 and cannot wait for season 2. Also, shoutout to actor Wyatt Oleff (also known for It), who plays, Stan, the main protagonist’s newly made friend – Stan is one of the best things in the show.

Episode duration: under 30 minutes (some or barely 20 minutes long).

Binge-ability: as there are only 7 episodes, the chances of watching this in a day are extremely high. 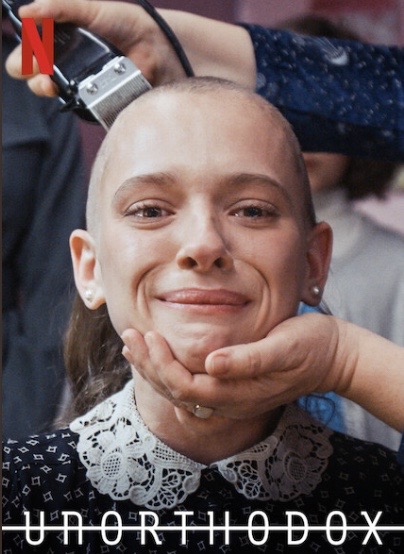 This limited four-part series was incredible! It’s partly inspired by writer Deborah Feldman’s own life experience, who was born into (and eventually left) a Hasidic Jewish community in New York – her book Unorthodox: The Scandalous Rejection of My Hasidic Roots, is a memoir of this.

The series is about Esty, a 19-year old girl who, following a strained arranged marriage, runs away from her Williamsburg-based ultra orthodox community and heads to Berlin. Compelling and painful, you can’t help but instantly root for Esty to find her own voice and get some control over her life. The acting is incredible – not to mention the fact that it makes me want to move to Berlin.

Binge-ability: it really is one of those shows you won’t be able to stop watching. 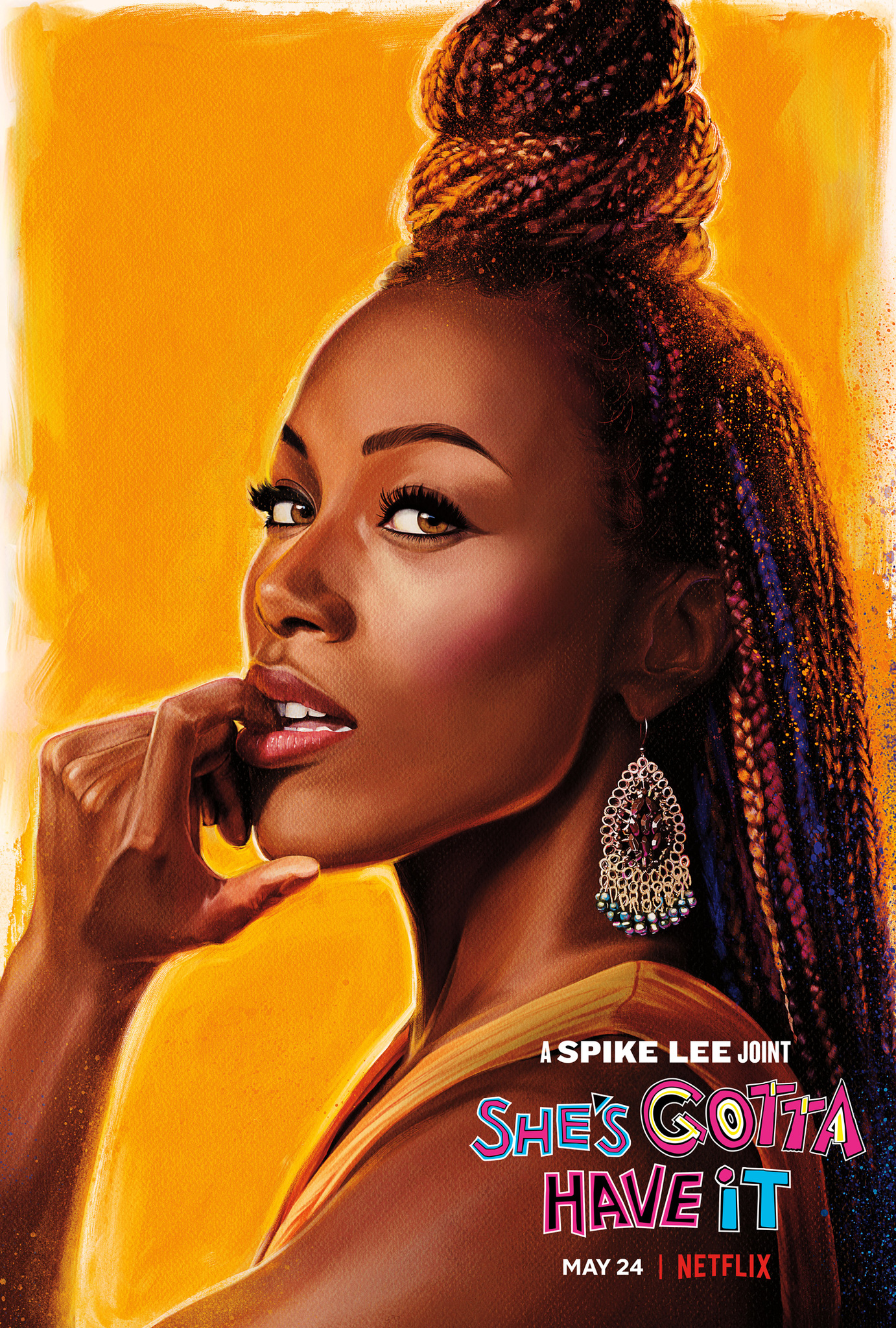 A strong female character that makes no apologies for owning her sexuality? Hell yeah! We need to see more of this on our screens, and that’s why I personally found She’s Gotta Have It is so refreshing.

Again, how the hell did I miss this? I’d almost go as far as saying that this show might be my favourite out of all of these (although they’re all very different and I love them all). I’ve not seen a lot of director Spike Lee’s work (although BlacKkKlansman, which I wrote about here, is to date one of my favourite movies), and even though I’m not a big fan of movies being remade into TV shows, I couldn’t resist giving She’s Gotta Have It a go. Based on Spike Lee’s 1986 film of the same name, the series was also made under Lee’s vision. I devoured season 1, and decided to watch the film. Looking back I should probably have watched the film first. I have to say I did prefer the series, as it feels much better suited to the times we live in and is ultimately so much more empowering from a female perspective. Having said that, the film is incredibly stylistic and was probably pretty groundbreaking considering it came out in the eighties. With the premise of a super confident woman who has three main lovers, the series also has a strong focus on African American identity, Brooklyn’s history and US politics – something the film lacked and which unsurprisingly makes the series even more engaging. It’s also a vibrant love letter to Brooklyn’s Fort Greene neighbourhood, has a banging soundtrack and great names (our hero’s called Nola Darling).

Even though the second season didn’t flow or feel quite as magical as the first, I was devastated to find out that the show was cancelled in 2019. But it’s still a super entertaining piece of work by Spike Lee available on Netflix.

6. Never Have I Ever

I’ve got a little bonus for you, as this show only came out yesterday!

You know what else we need to see more of? More ethnic women who don’t just have a supporting role in films and TV. Hence why I thank the heavens for Never Have I Ever. I love actress / writer / producer Mindy Kaling, so when I heard this was her latest creation I knew it was going to be a good one. While the story has been told many a time – ‘uncool’ kid in high school who frantically fantasises about losing her virginity to one of the school’s hot jocks – Kaling has managed to give this classic high school tale a realistic, very up-to-date spin. The fact that the main character, Devi, is Indian American, is refreshingly not brushed under the carpet (or should I say white-washed), but in fact celebrated and so important to the storyline and her persona. Also, shocker – her two best friends are also not white! And there’s a prominent LGBTQ storyline! Even the guy Devi is obsessed with is mixed! I could have really done with shows like this when I was younger, and I hope this helps the many young women who don’t see themselves represented on screen.

Binge-ability: let’s just say I had to stop myself from watching it all in one afternoon.

So there you have it – plenty of great shows that serve as a reminder that women can rule! There actually seem to be quite a few series on Netflix that are female-lead – I’ve currently got Self Made: Inspired by the Life of Madam C. J. Walker on my radar. Have you seen any of these shows, or are there any you would recommend or can’t get enough of? I might try to make this kind of post a regular thing (I feel like I say that all the time, but I really mean it!) – in the meantime, happy binging!