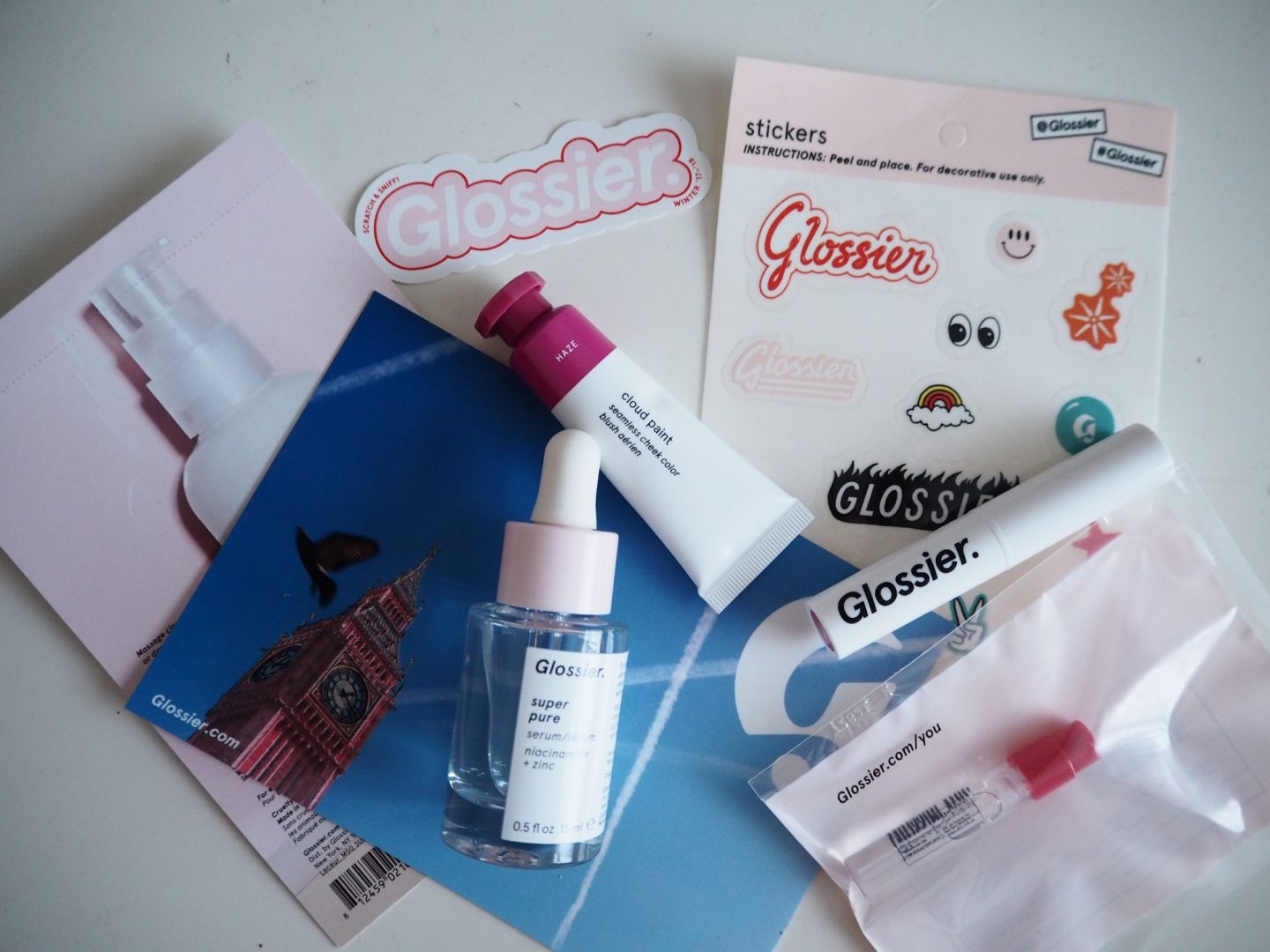 Happy Friday loves, I hope you’ve all managed to get your hands on some good old Black Friday deals if those were your wishes – as expected of moi I was a little naughty and did some damage on Mango’s website (oh Mango, thank you for consistently killing it this year), but also had my eye on a few pieces that annoyingly haven’t been reduced and sadly missed out on a few cute things from miscellaneous brands.

What I am pleased to say I did not miss out on was Glossier’s fast as lightening pop-up in London. Because oh my, that was gone in the blink of an eyelid. Frankly I’m a little surprised at myself for not having heard of this pop-up before it was happening – was it me being upset aloof or did Glossier actually keep it super hush hush (I’m telling myself it was the latter).

Anyway, Instagram came to my rescue again when I casually came across someone’s post about Glossier in London. Wait, what? I’d of course heard about the American beauty brand launching a UK website and thankfully having a UK warehouse, but an actual pop-up? Had I been living under a rock? Well, it was a dream come true. I’m an absolute sucker for any beauty hype (to an extent in which it’s embarrassing), but I decided to attempt to be a sensible grown-up (she’s somewhere inside of me, I’m sure) and think twice about going absolutely ape-sh*t on Glossier’s website. Reading blog posts and watching Glossier-themed beauty videos did not help, although I managed to stay calm and carefully think about which products I could potentially try.

I love online shopping but I am still very much a traditional shopper – I like to get a feel for a product before buying it. So when I heard about Glossier’s pop-up I couldn’t resist going last Sunday and getting up close and personal with this mega-hyped products… 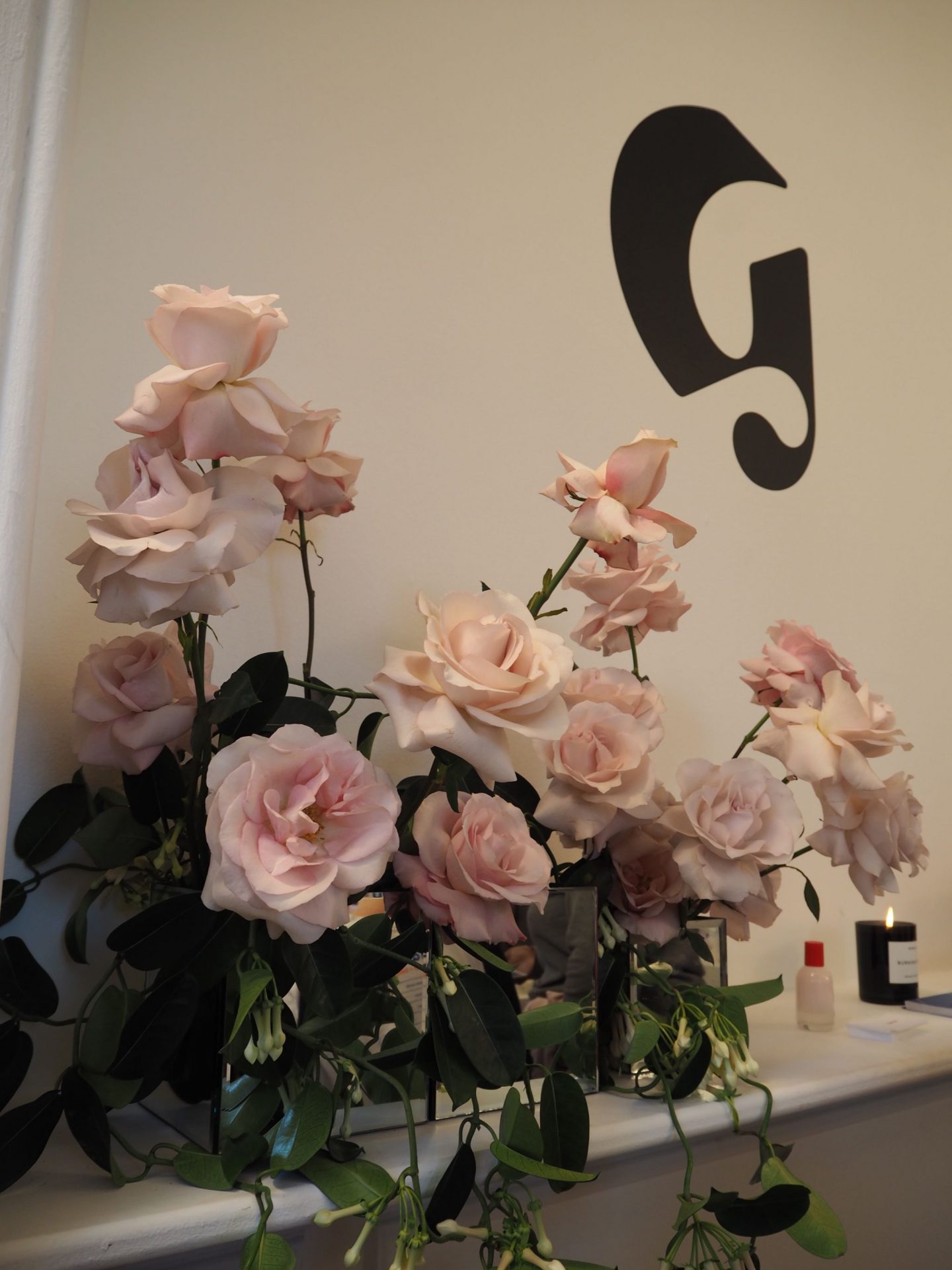 So last Sunday I dragged my mum, who was visiting London and staying with me at the time, to Portland Place in Marylebone, where Glossier was showcasing its pretty products in a 18th century home from the 15th to the 22nd of November. Yes, my mum, who has little to no interest in beauty, is an absolute champ for having come with me to this rather crazy event (“Why are people taking pictures of their shopping bags?!” was one of the many words of wisdom spoken by her whilst we were there). As expected, it was all looking pretty beautiful – the two main rooms taken up by Glossier in the two-story venue were bright and airy, with the perfect dose of white and millennial pink and lots of gorgeous flowers in every possible corner. It was also inevitably and extremely crowded, which in all honesty made the experience stressful. I was also a little surprised that 90% of the ladies there were so, so young – I couldn’t help but feel ancient surrounded by all these tweens! I suppose it does make sense that Glossier would attract a younger crowd, as it’s got that super natural, your face but better vibe going for it – but I still wasn’t quite expecting to feel so out of place. 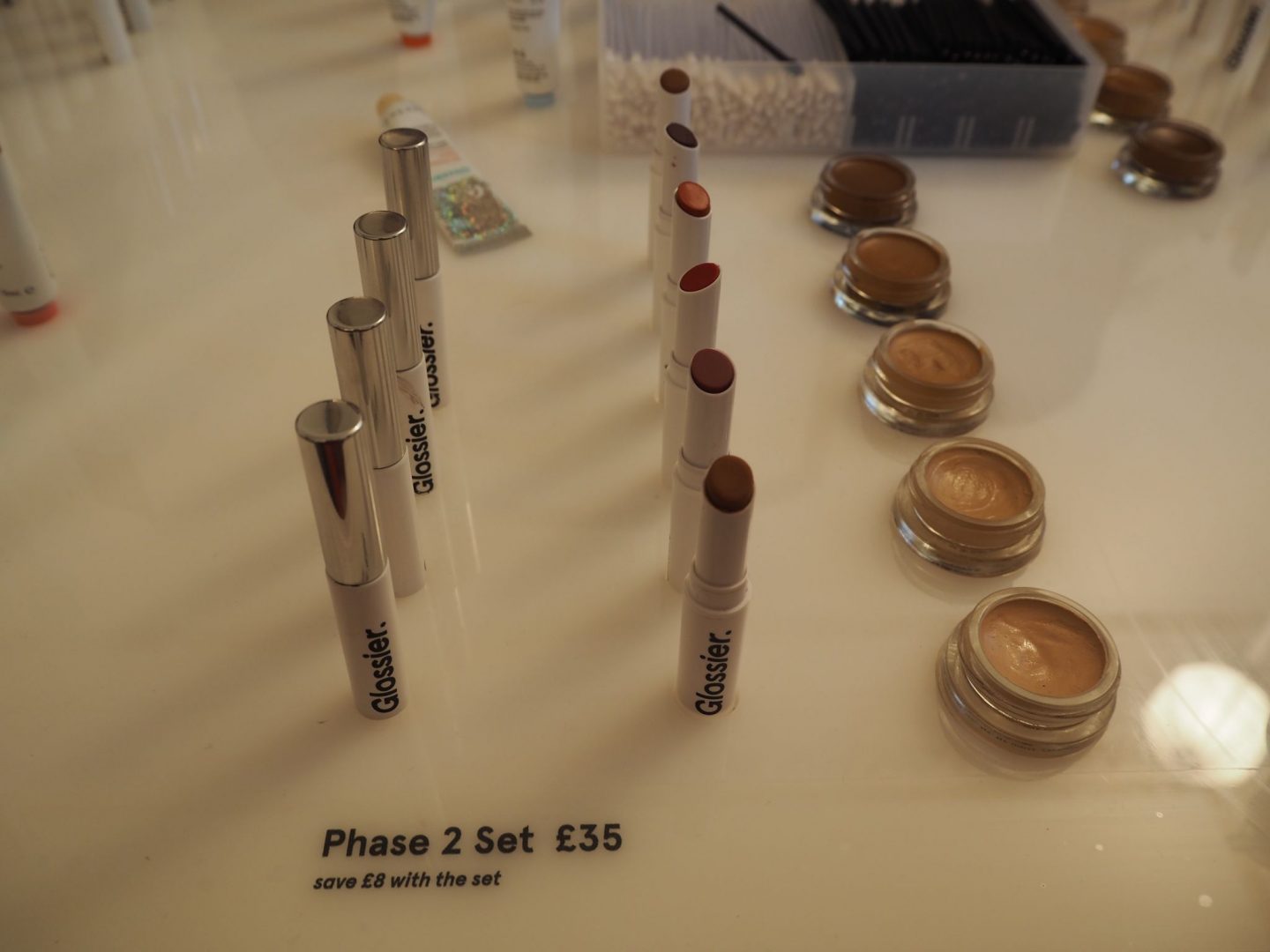 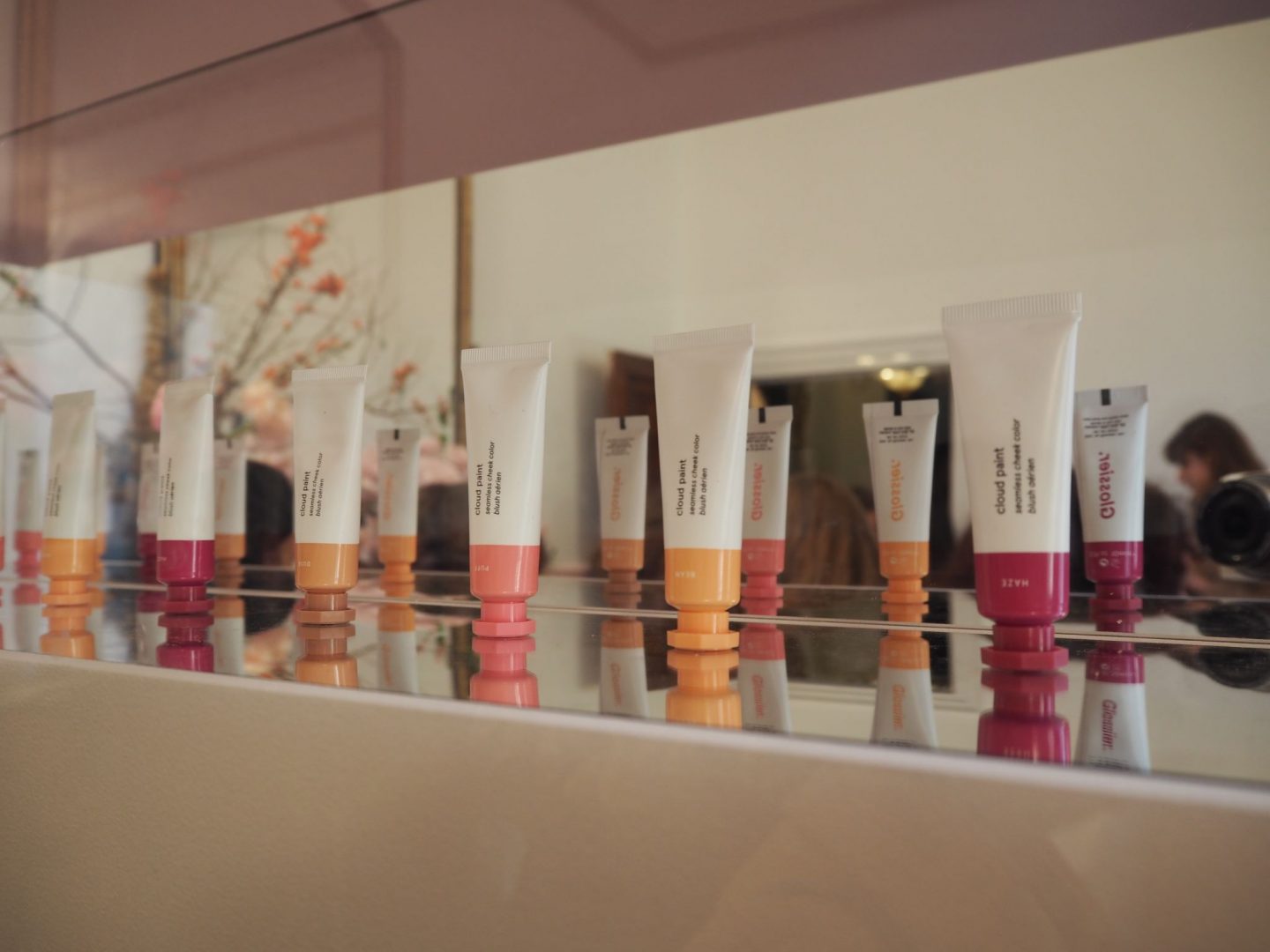 Making it rain and spending a ton of £££ was not an option for me – after all, Glossier is affordable but not super cheap either. I had more or less already made up my mind about what I wanted before going, and after speaking to one of the super sweet Glossier girls there I bought three products. If money weren’t an issue I probably would have bought one or two more things, but alas, this girl gotta watch her pennies. Also, I’d rather start off with a few things instead of going crazy with a ton of stuff that I can’t say I need as such. 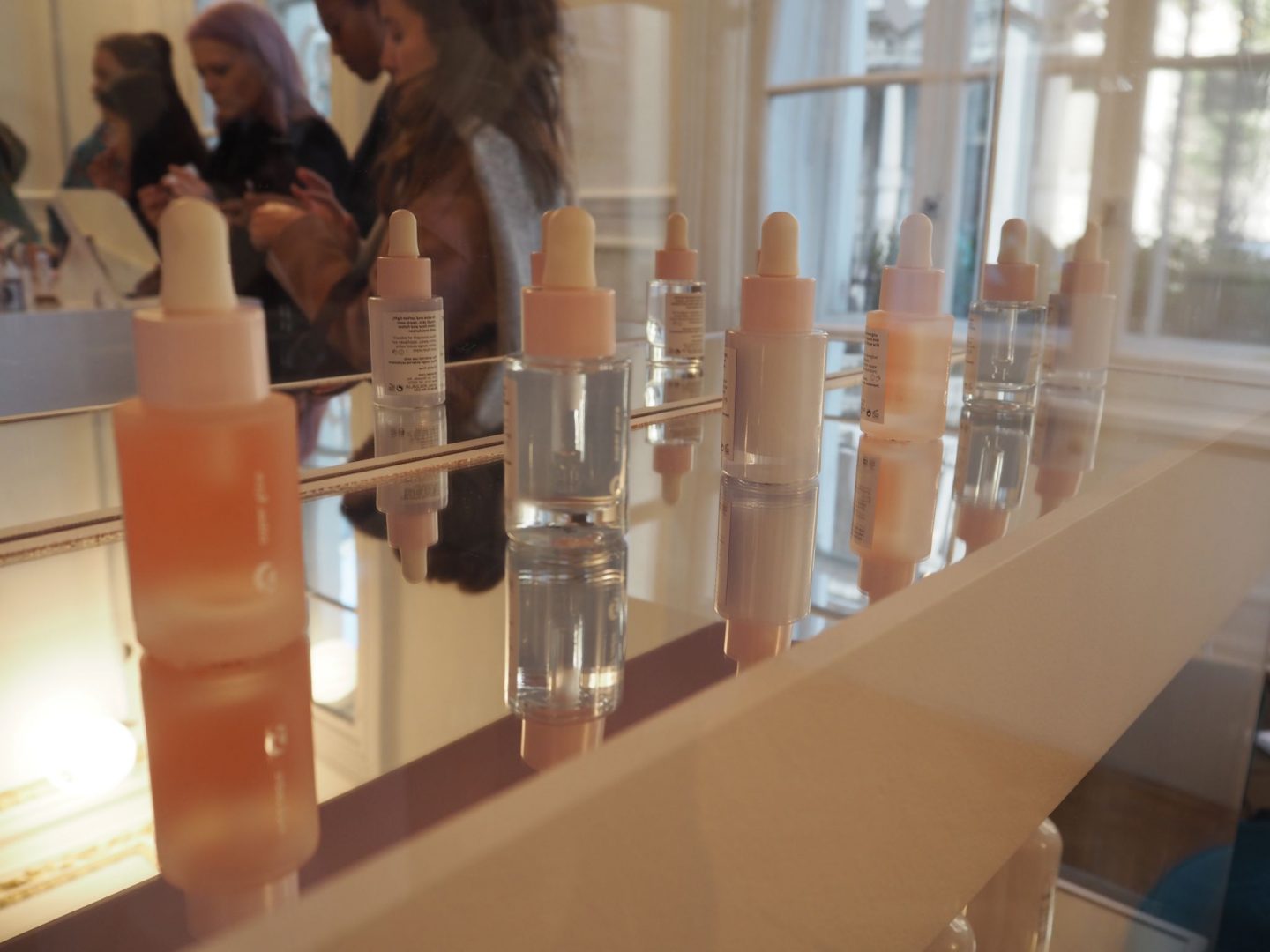 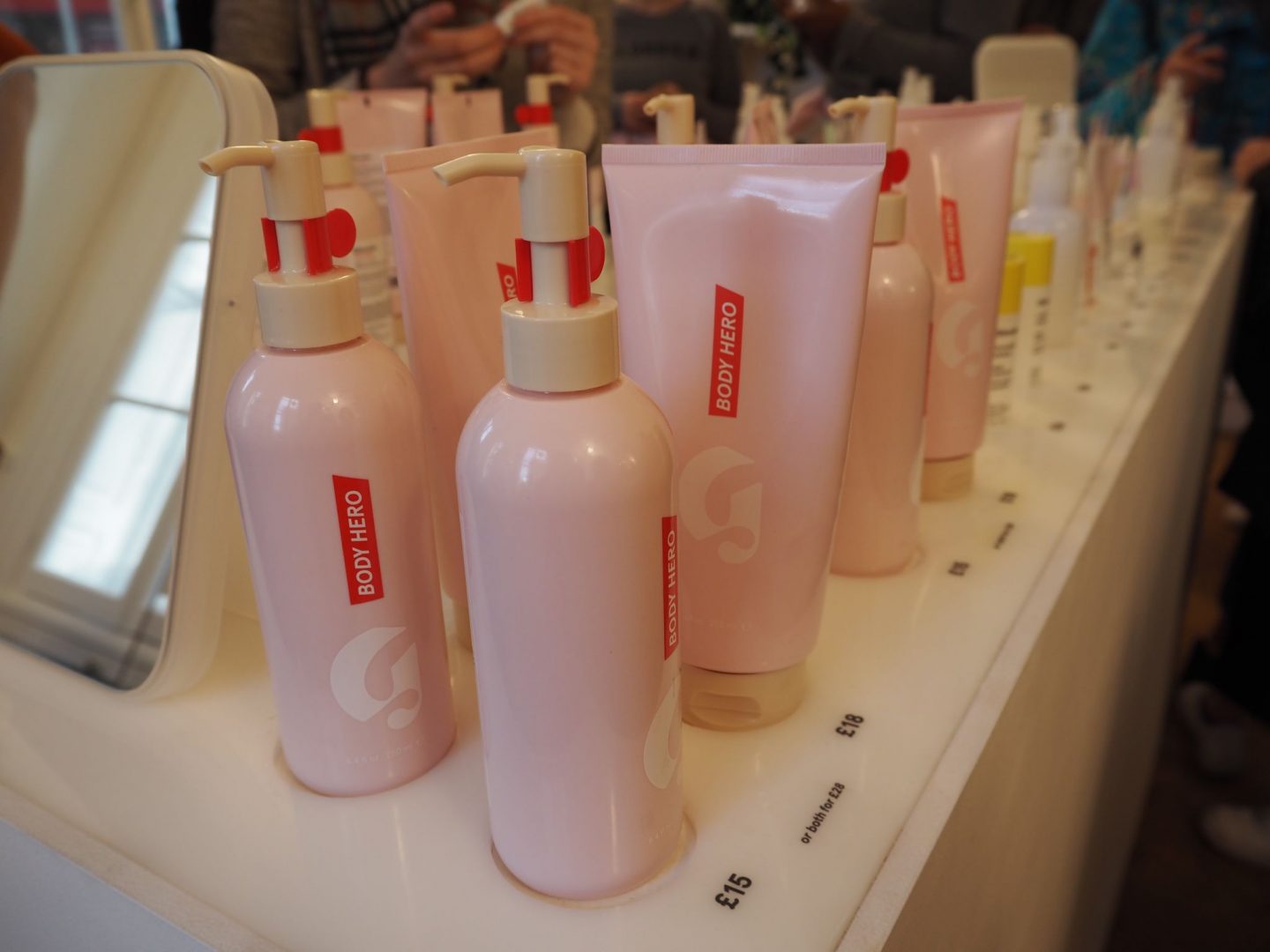 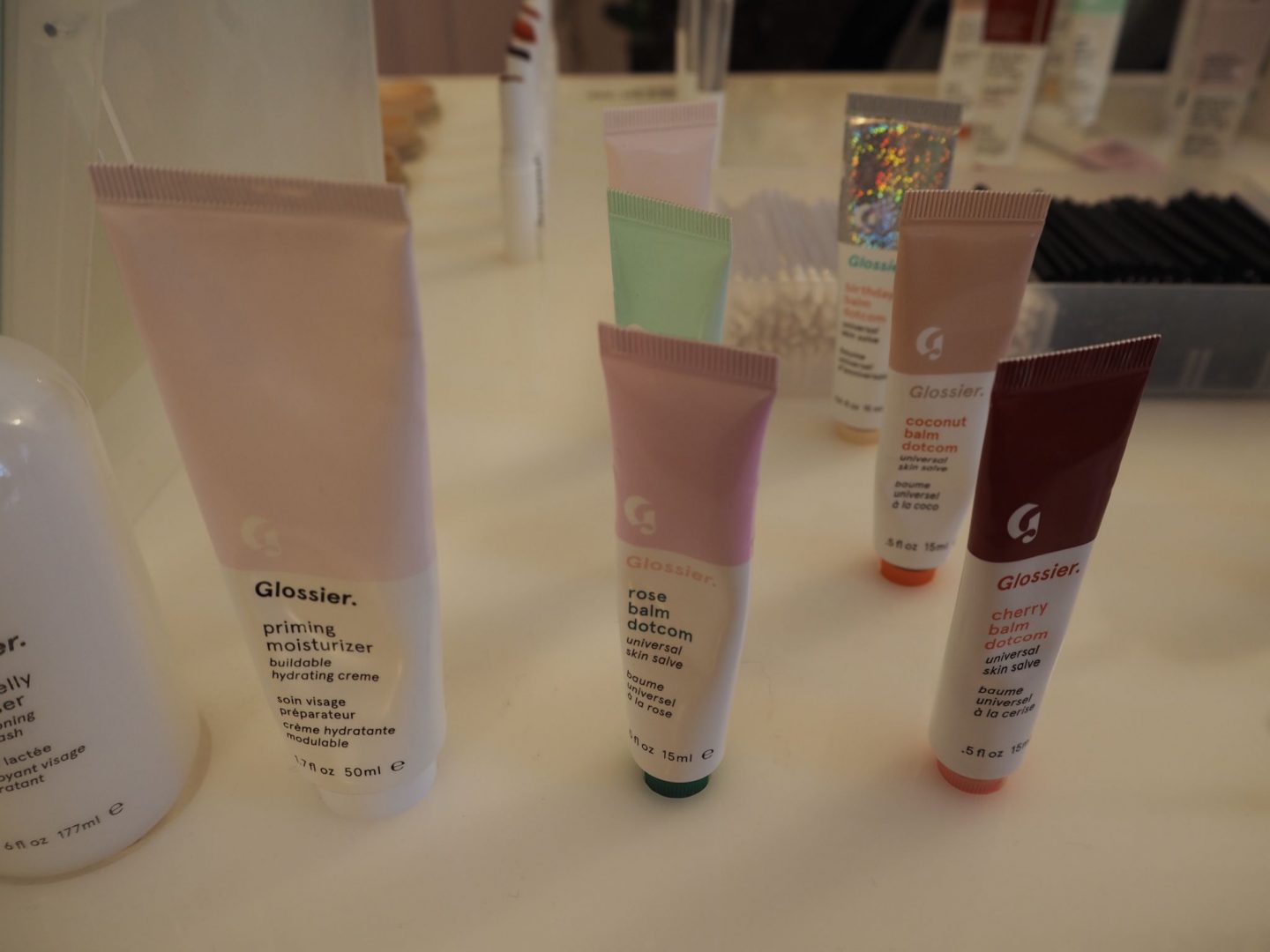 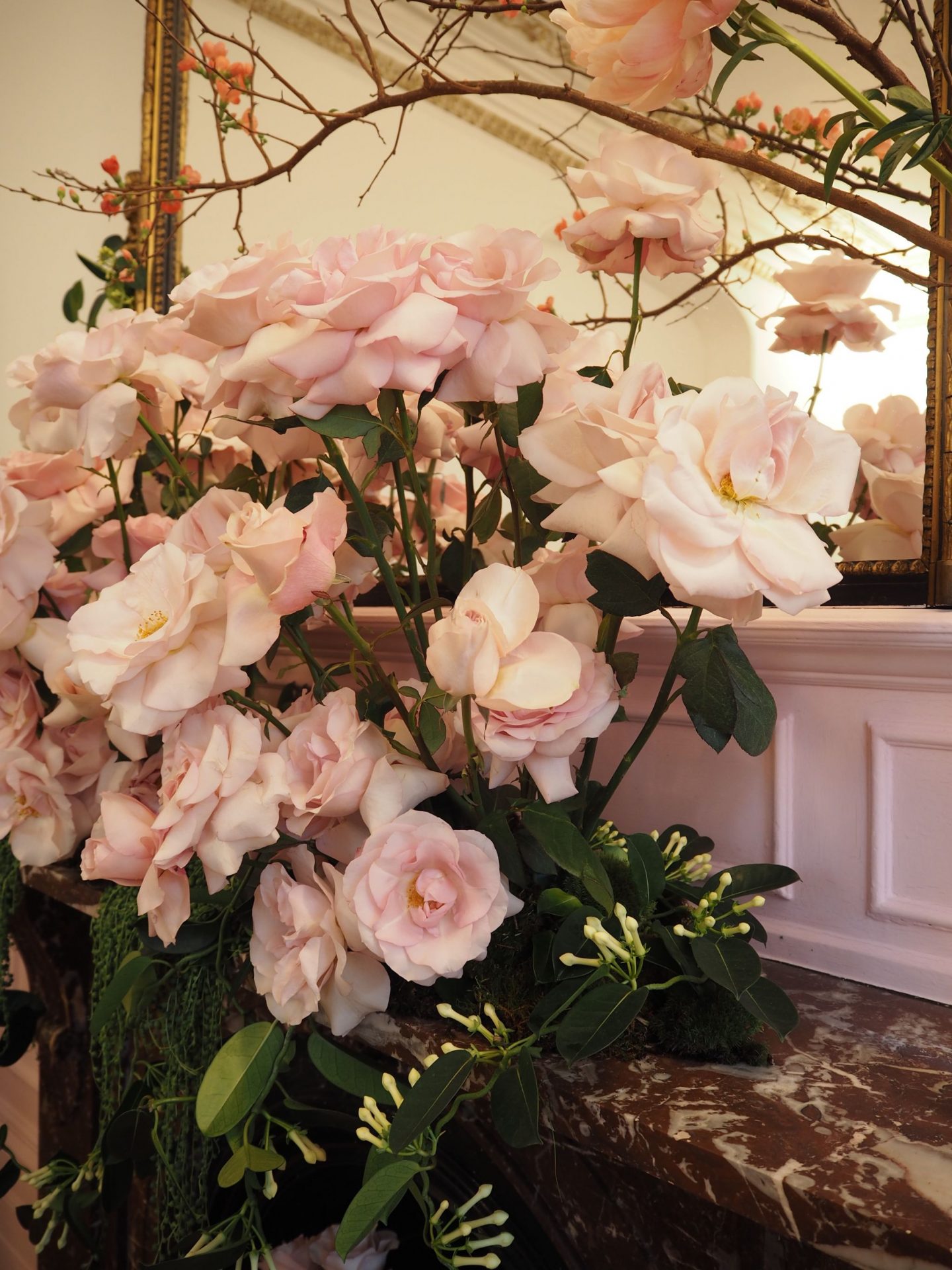 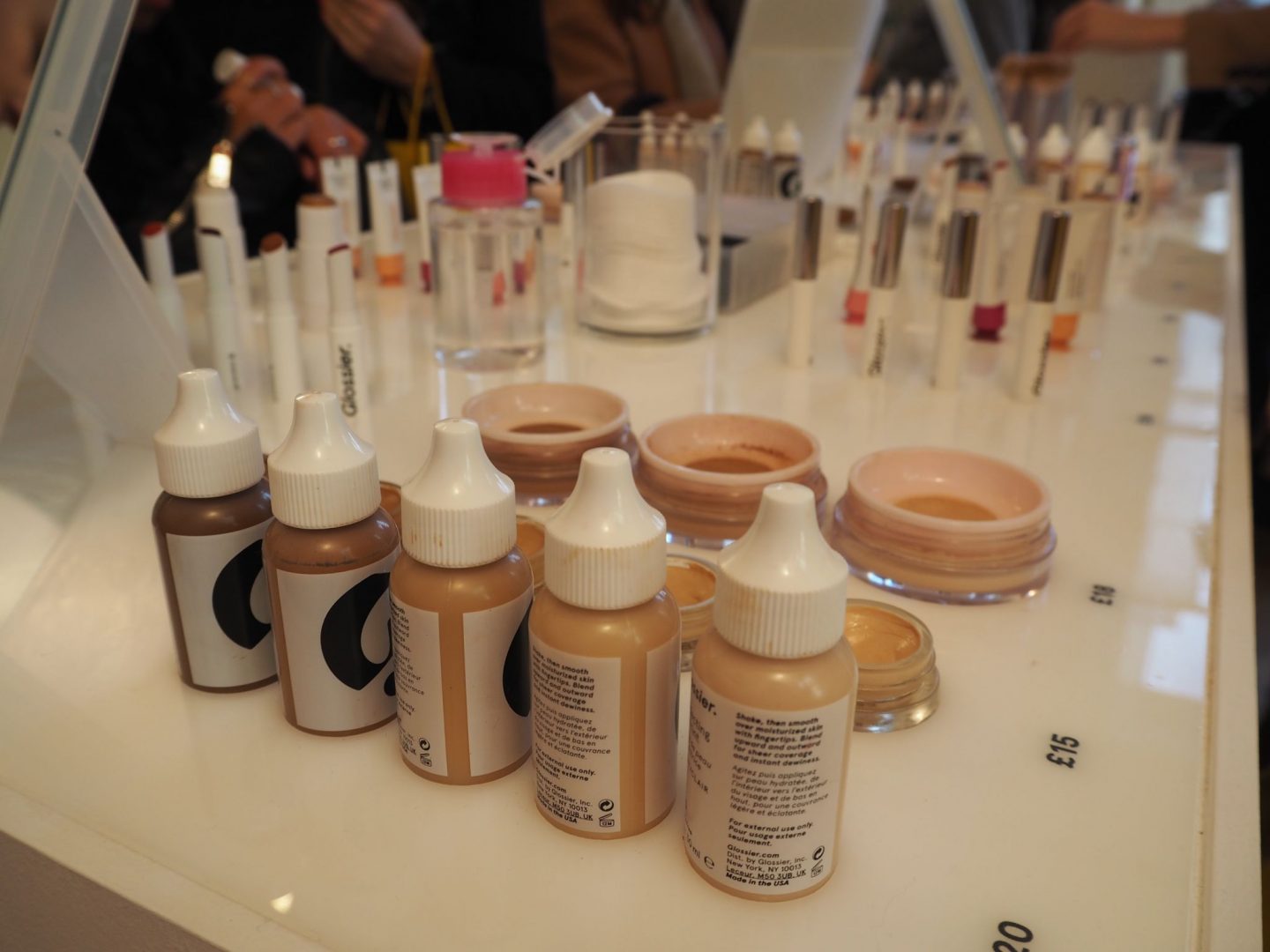 The fact that Glossier doesn’t actually do a million products is refreshing and makes the selection process easier – at the pop-up there were various samples of the same things, which made sense as there were a multitude of people. 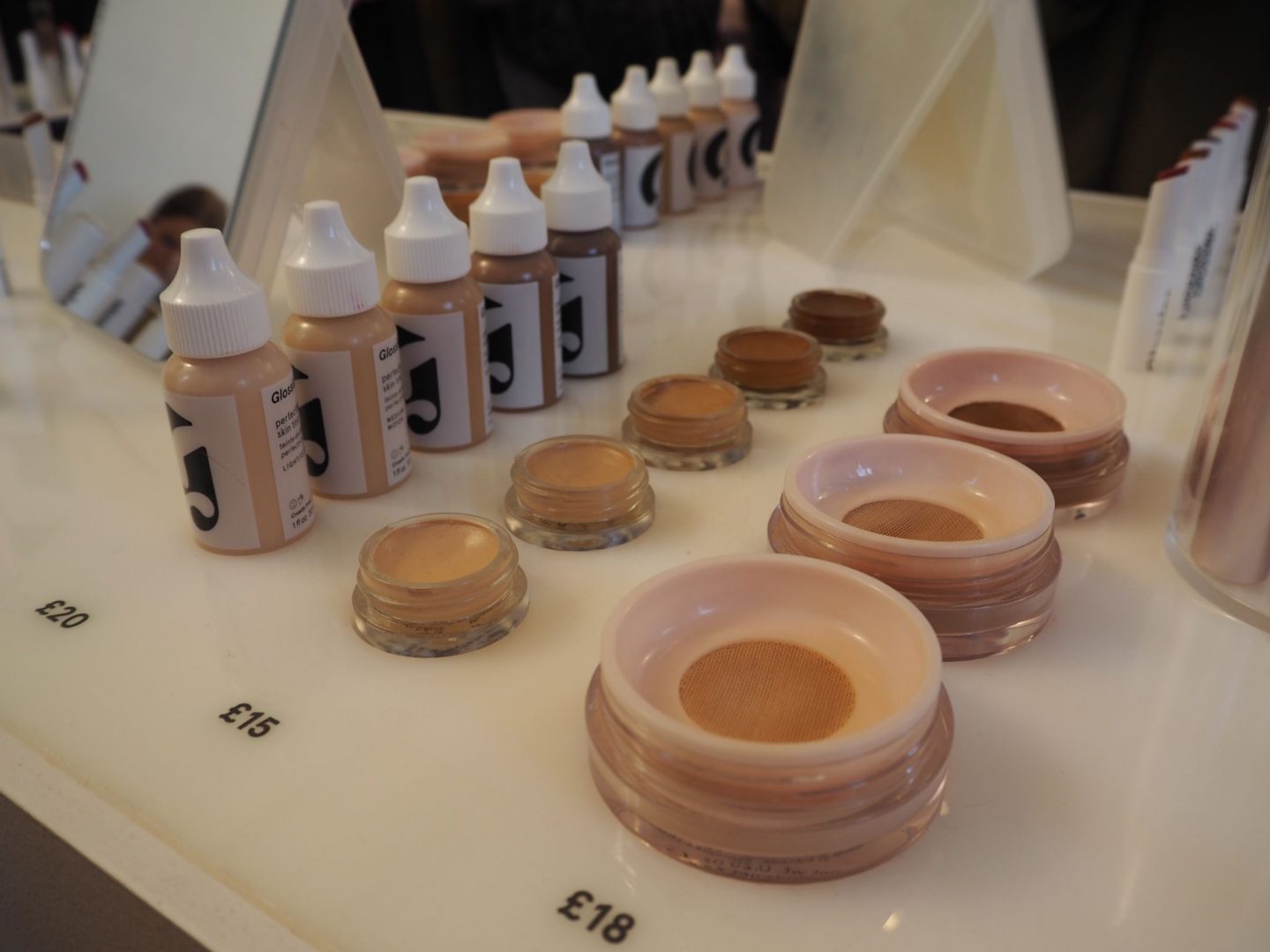 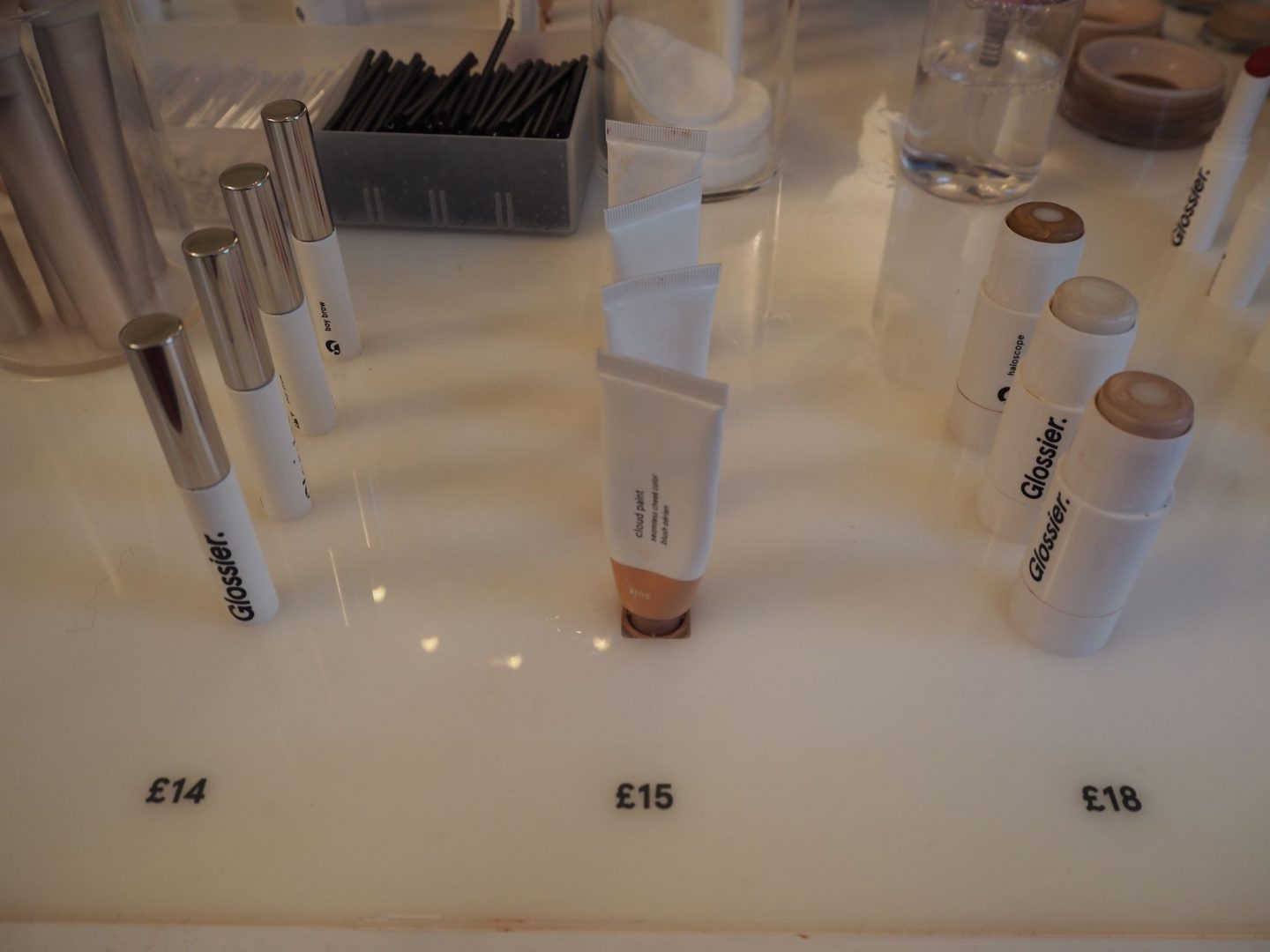 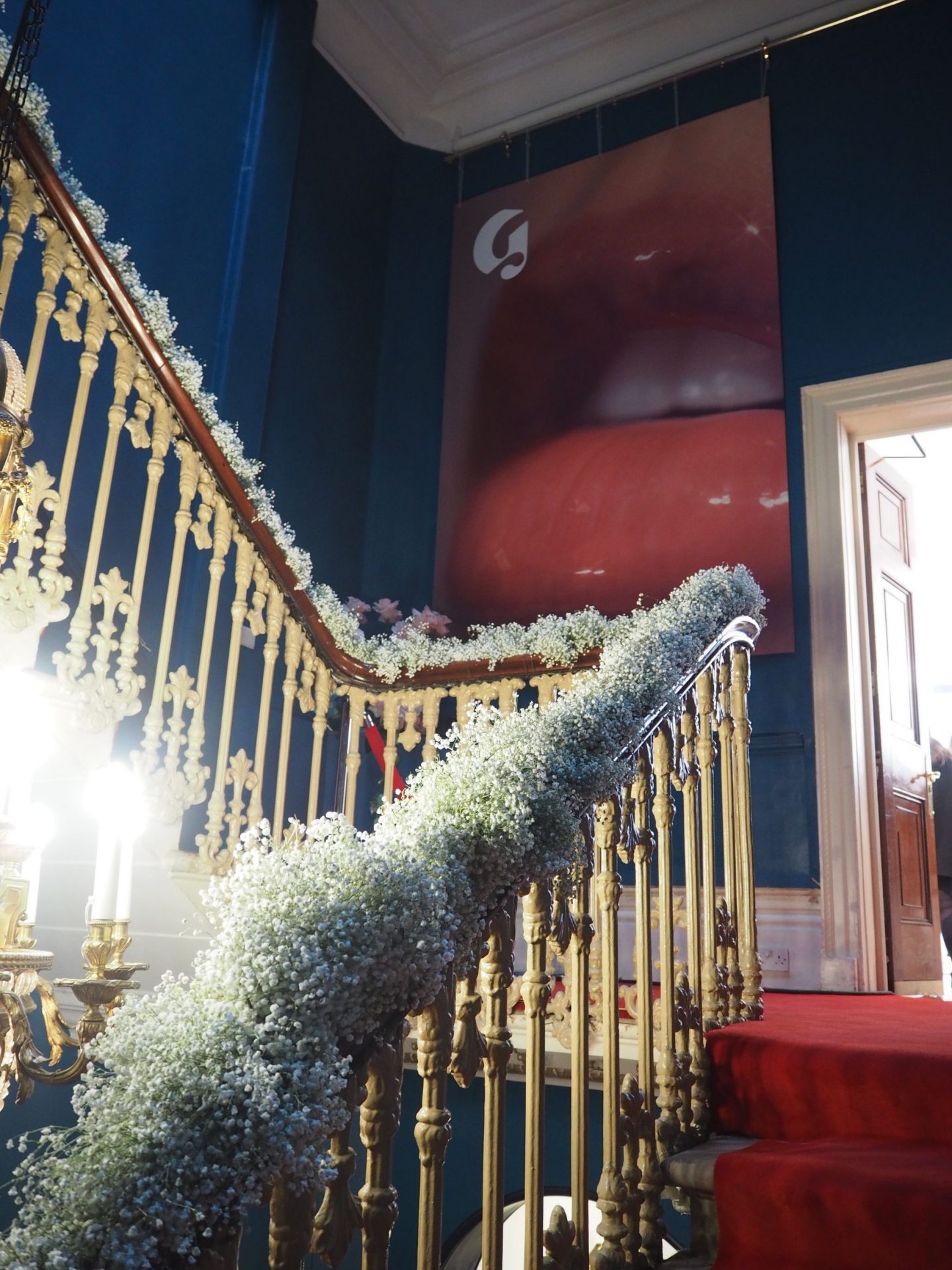 As mentioned, the pop-up event was on two floors, with a huge room featuring more samples and small red room being upstairs. Now isn’t that flowertastic staircase the prettiest thing ever? “Not that practical if you want to hold onto the handrail,” my mum noted. 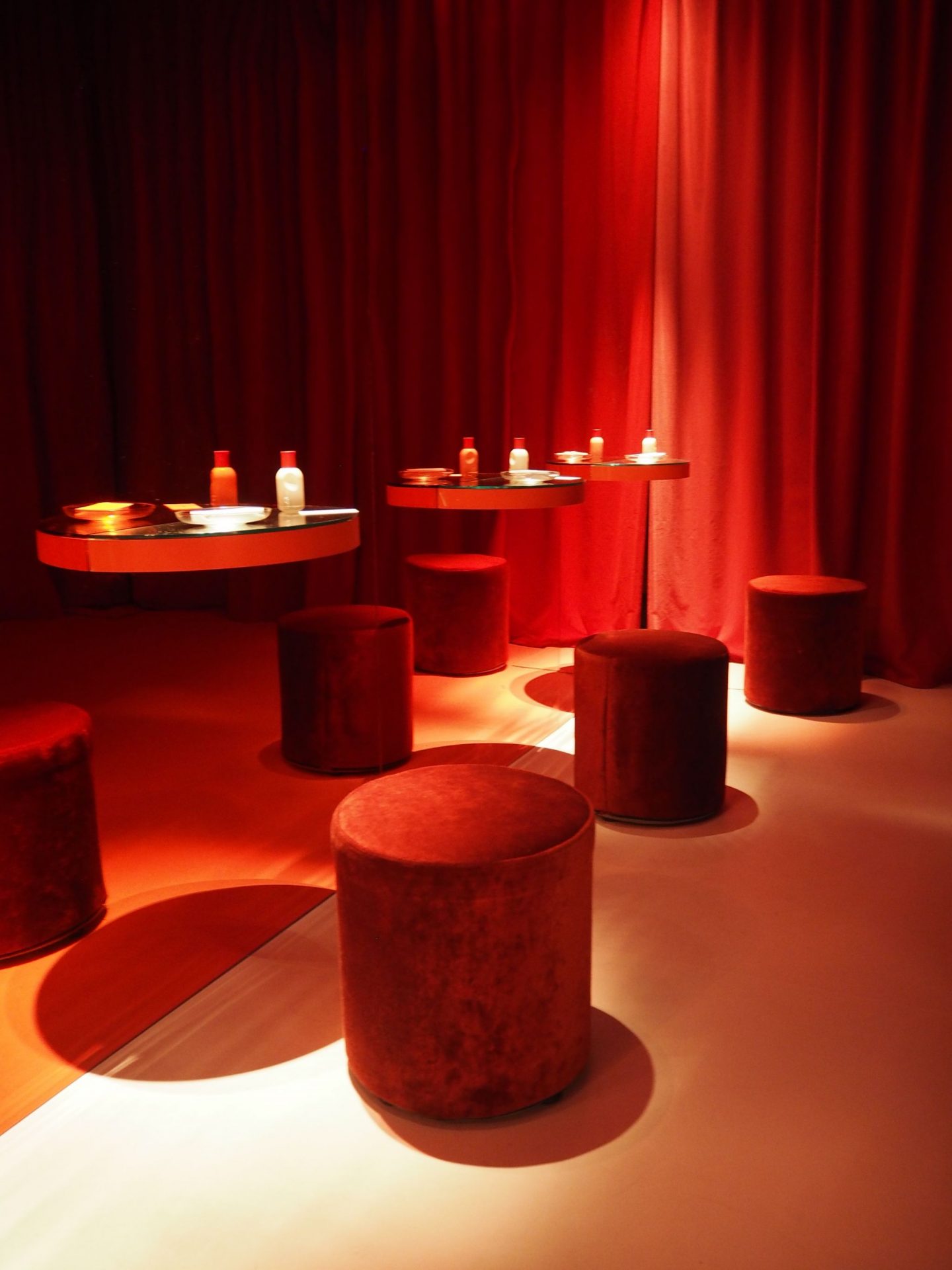 Shout out to this gorgeous and ever so sexy little red room, where Glossier was beautifully presenting its fragrance Glossier You – which I actually loved! 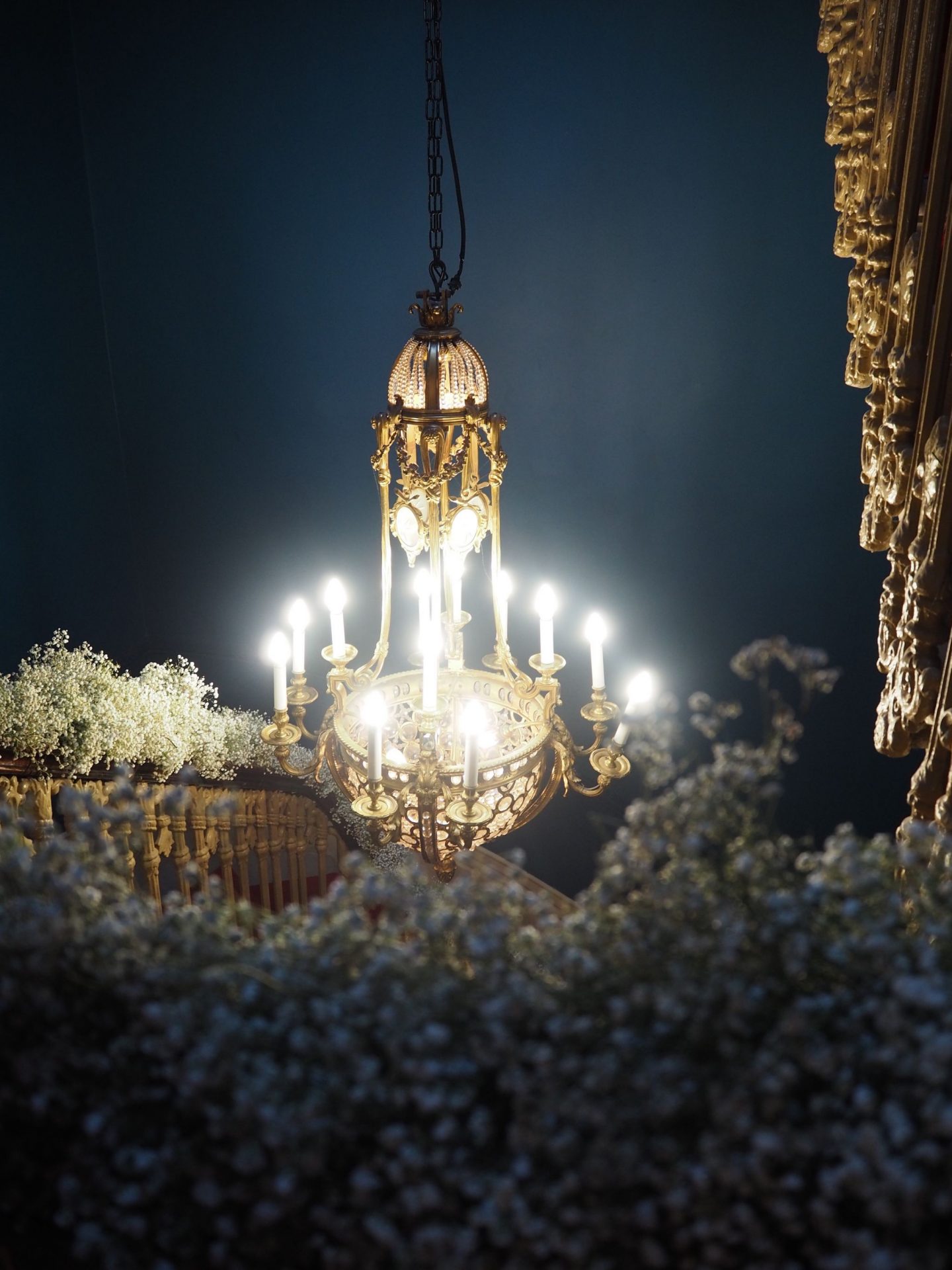 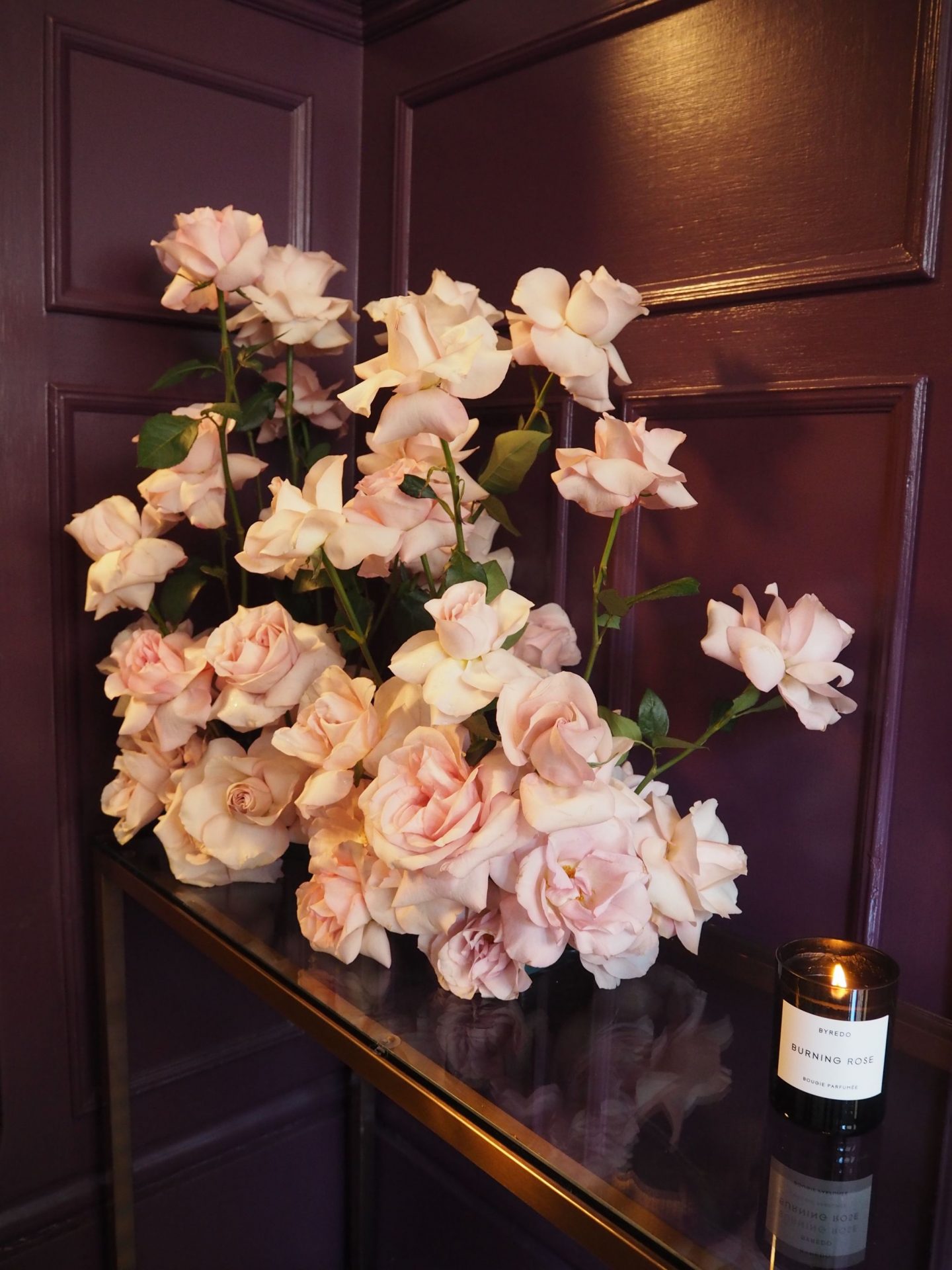 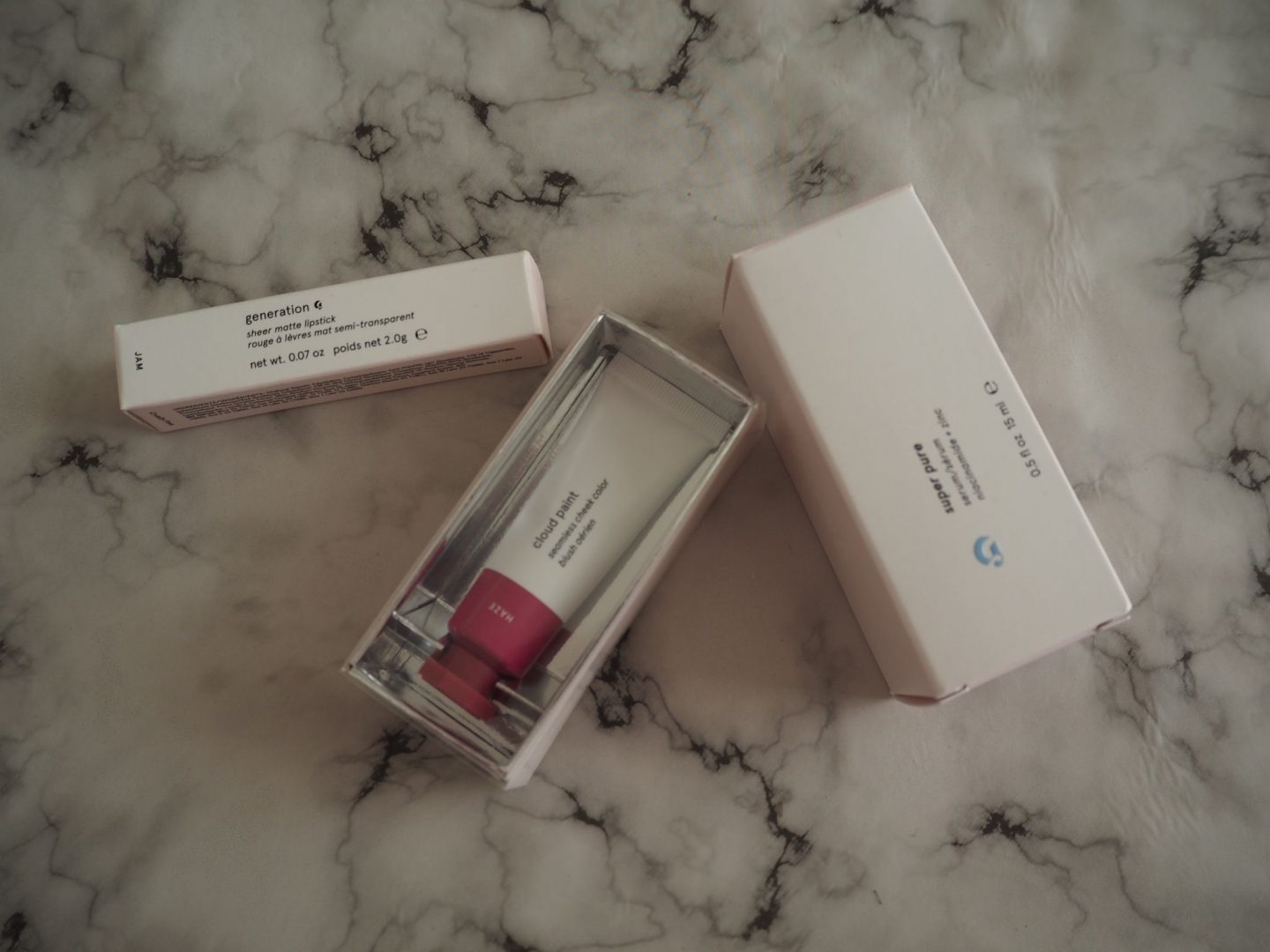 I got myself a tube of Cloud Paint, one of the brand’s Generation G lipsticks and the Super Pure serum – see my thoughts below… 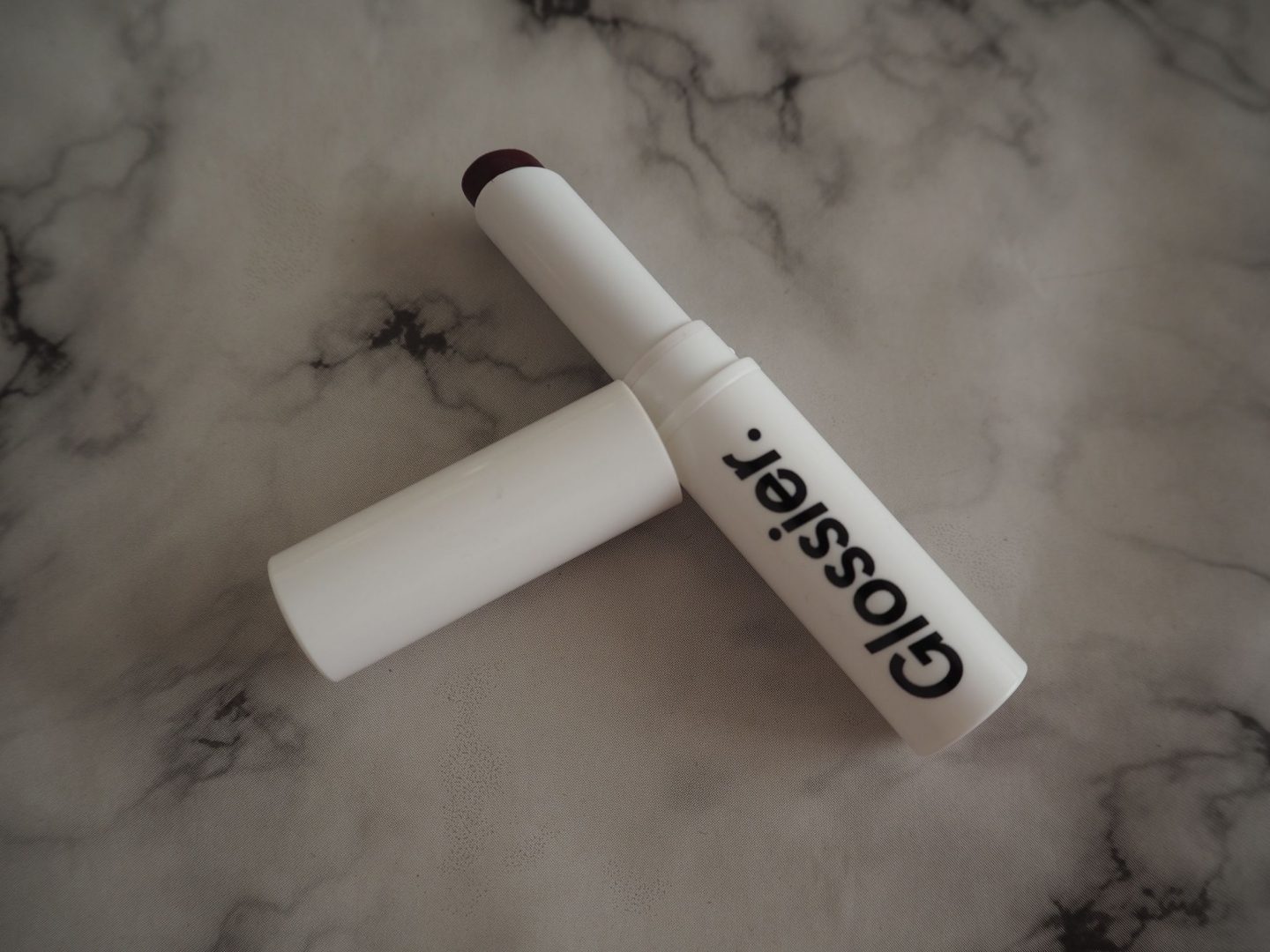 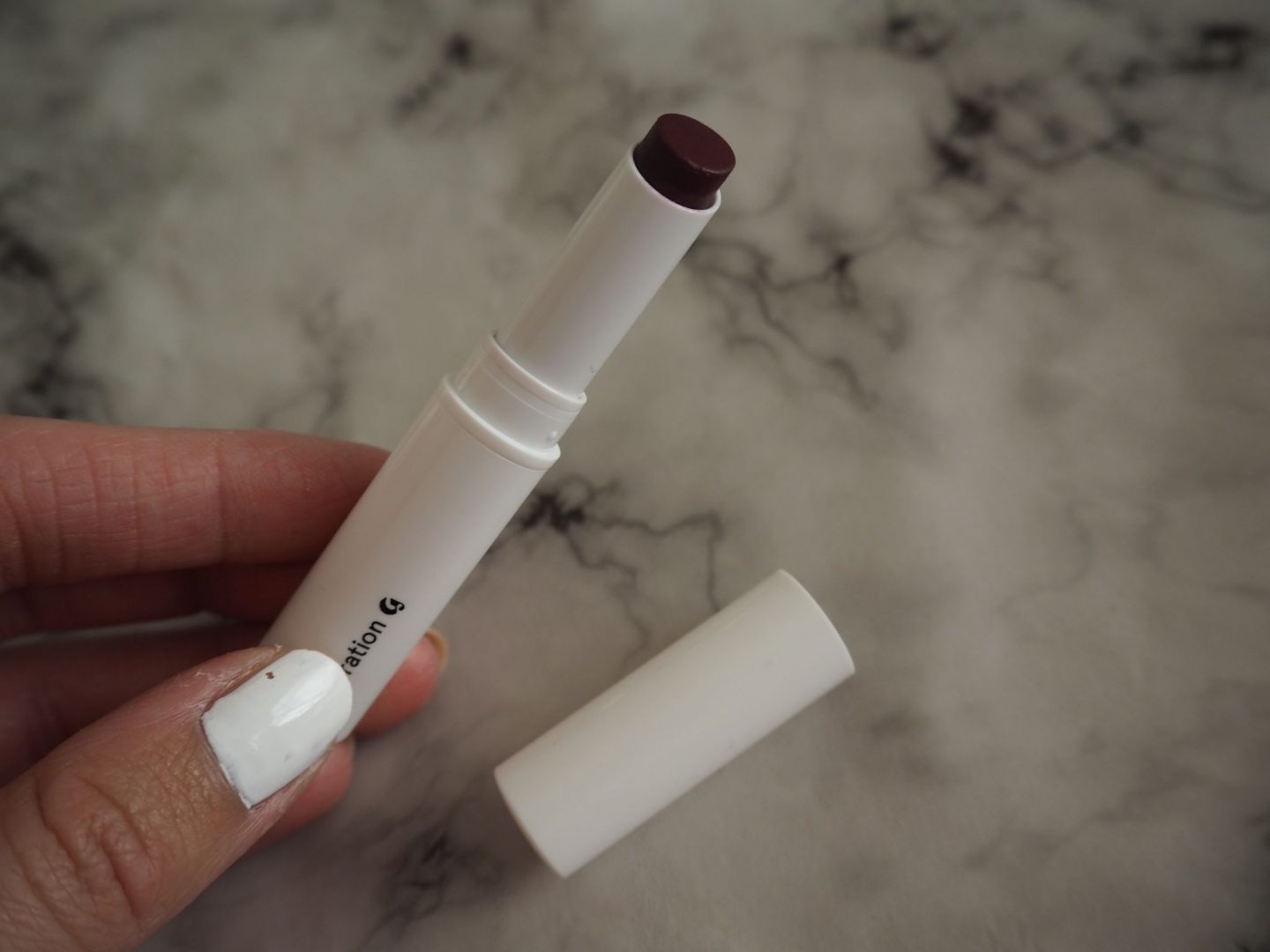 Lipstick is usually my way of buying into a beauty brand, but I was very hesitant about trying out this product. In 2016 I discovered liquid lipstick and have since never looked back – I do love a strong colour and lots of pigmentation.

Generation G is pretty much the opposite of that – but I really, really like it! I decided to give it a go, essentially because curiosity got the better of me. Whilst at first I was interested in trying the shade ‘Zip’ I ultimately chose ‘Jam’ because Zip was a little too Poppy red for me, and Jam’s magenta tone looked like it would fulfil my need for a strong, distinctive shade.

Let’s just say my mum loved it – and that’s not a bad thing. She’s the opposite of me when it comes to lipsticks, preferring a much more subtle effect. Jam is subtle but not ‘Am I actually wearing anything?’ subtle, it’s a lovely berry pink shade and nice formula that can easily be built up. I knew the shade wouldn’t come out as dark as it looks in the tube, but to my surprise I really liked the natural but pretty effect, and even though I wouldn’t wear it on a night out or for dinner parties (oh gawd) as such, it’s definitely great for let’s say a relaxed Sunday. Granted, I’m no stranger to a strong lip on a Sunday, but I’m willing to shake things up a little. 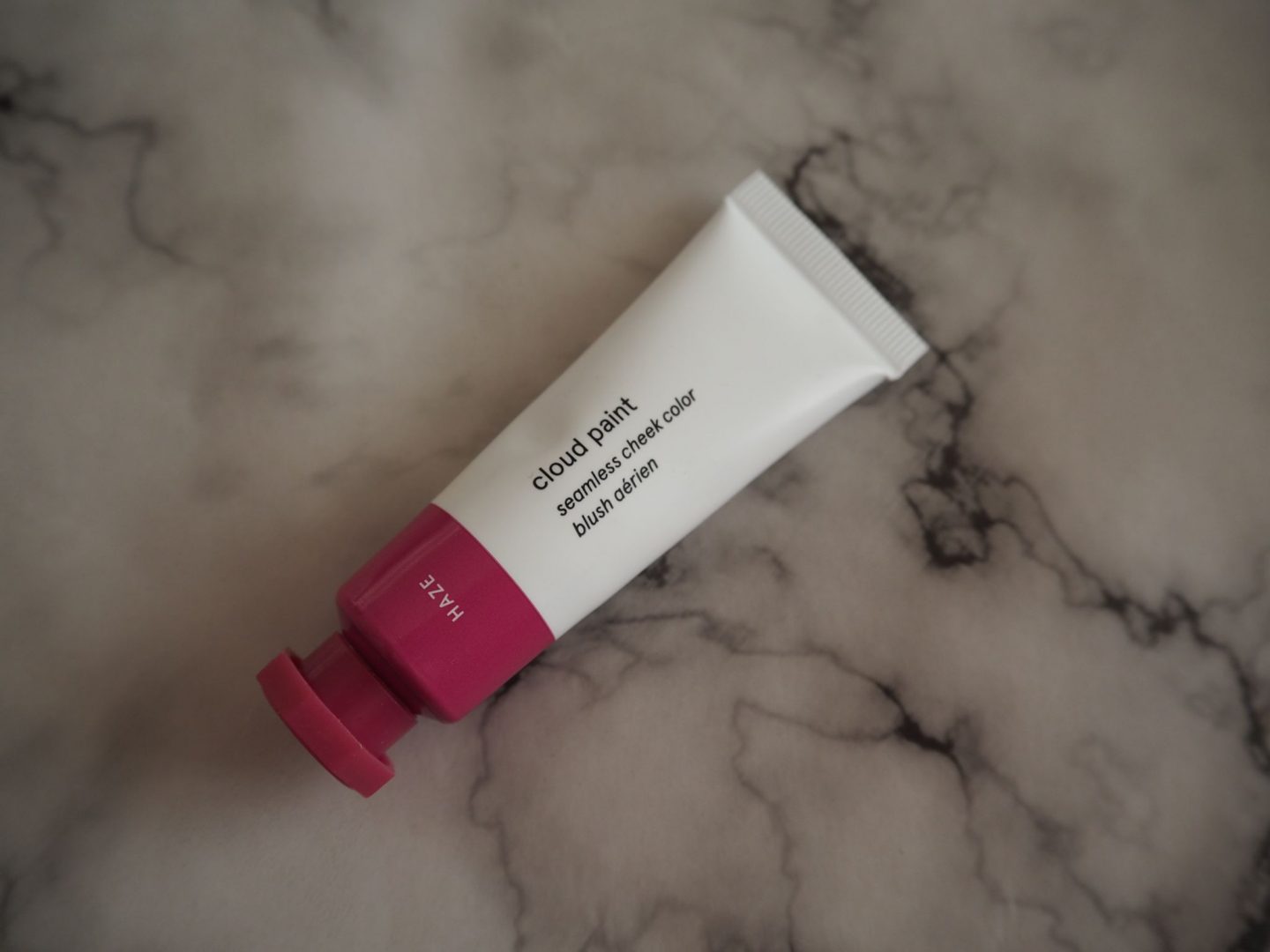 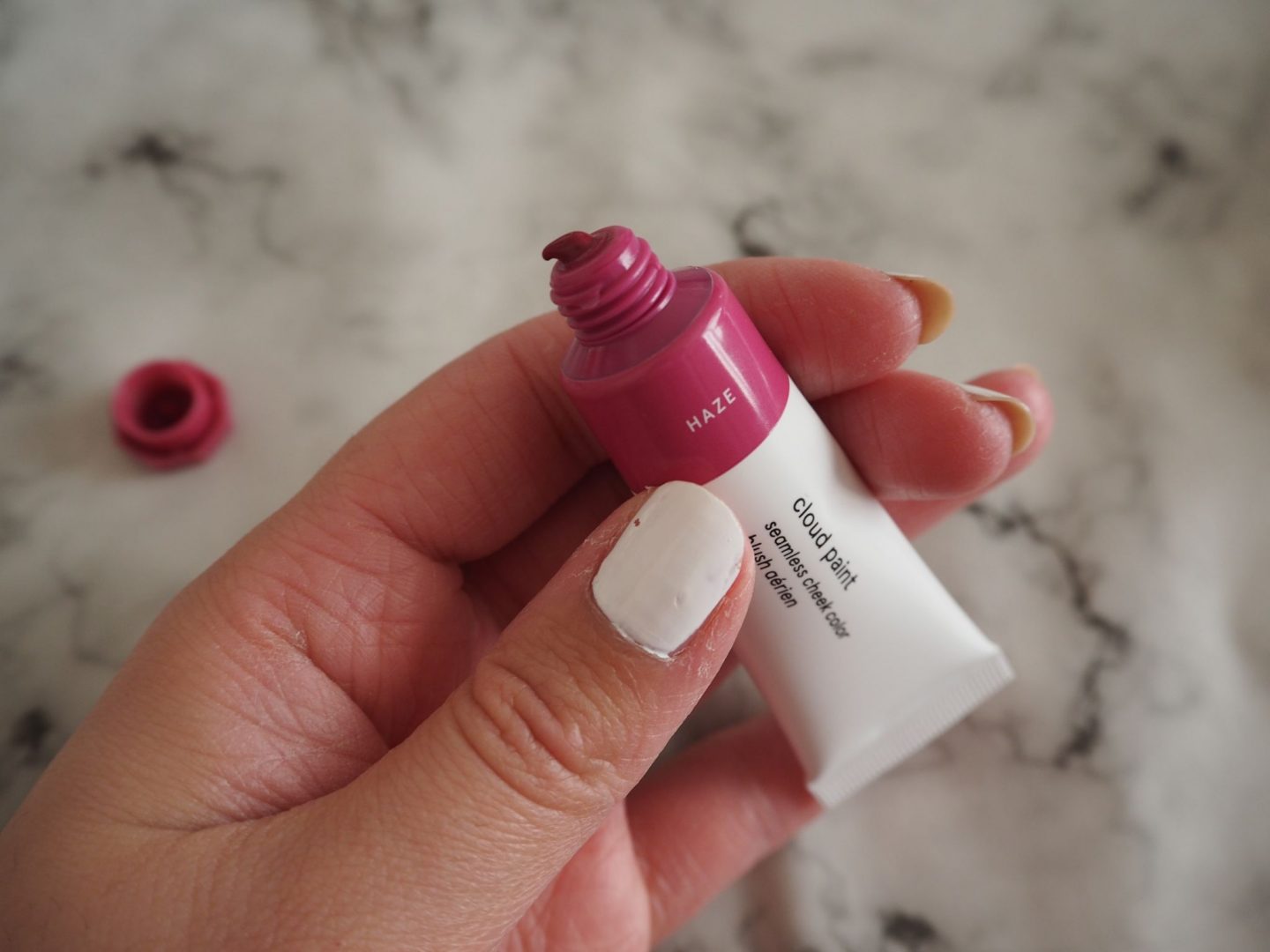 Oh, Cloud Paint. I’d go as far as saying that this was the product that really drew me in to Glossier. There was no way I was going to resist this little work of art. I have a weird relationship with beauty packaging – I’m either completely indifferent to it or become obsessed and have to have something solely because of the packaging, no matter how good or crap the product is. Ridiculous, I know!

With Cloud Paint however, I decided to go for it for various reasons. First of all, I love blusher – it’s the third favourite thing I like to put on my face (after my eyeliner and lipstick). And yes, of course, the adorable paint tube package is dreamy and sort of reminds me of my days as an art student and artist wannabe. But what really convinced me was the beauty world’s general consensus, which is that Cloud Paint is the bees’ knees. I’m not gonna lie, I was terrified of the fact that it’s a cheek stain – I have old memories of me trying to get to grips with Benetint and never quite getting the hang of it. But I literally copied what the models do on Glossier’s web and guess what, it looked pretty good if I may so myself. I went for the shade ‘Haze’ because I just wasn’t sure about the other shades, although now I’m thinking I could give ‘Husk’ a go? Haze is a lovely berry shade, not far off from the lipstick shade Jam – and, dare I say, could maybe work as a lip stain too?

One thing I will point out though is what you can see in the picture above – look at all the product that comes out!! I opened up the tube because I was thinking of doing a swatch and oh my god, I was shocked to see how much product came out without even pressing the tube. No, no, no – it’s a big minus for me. And yet, despite that, I still like this product. A lot. 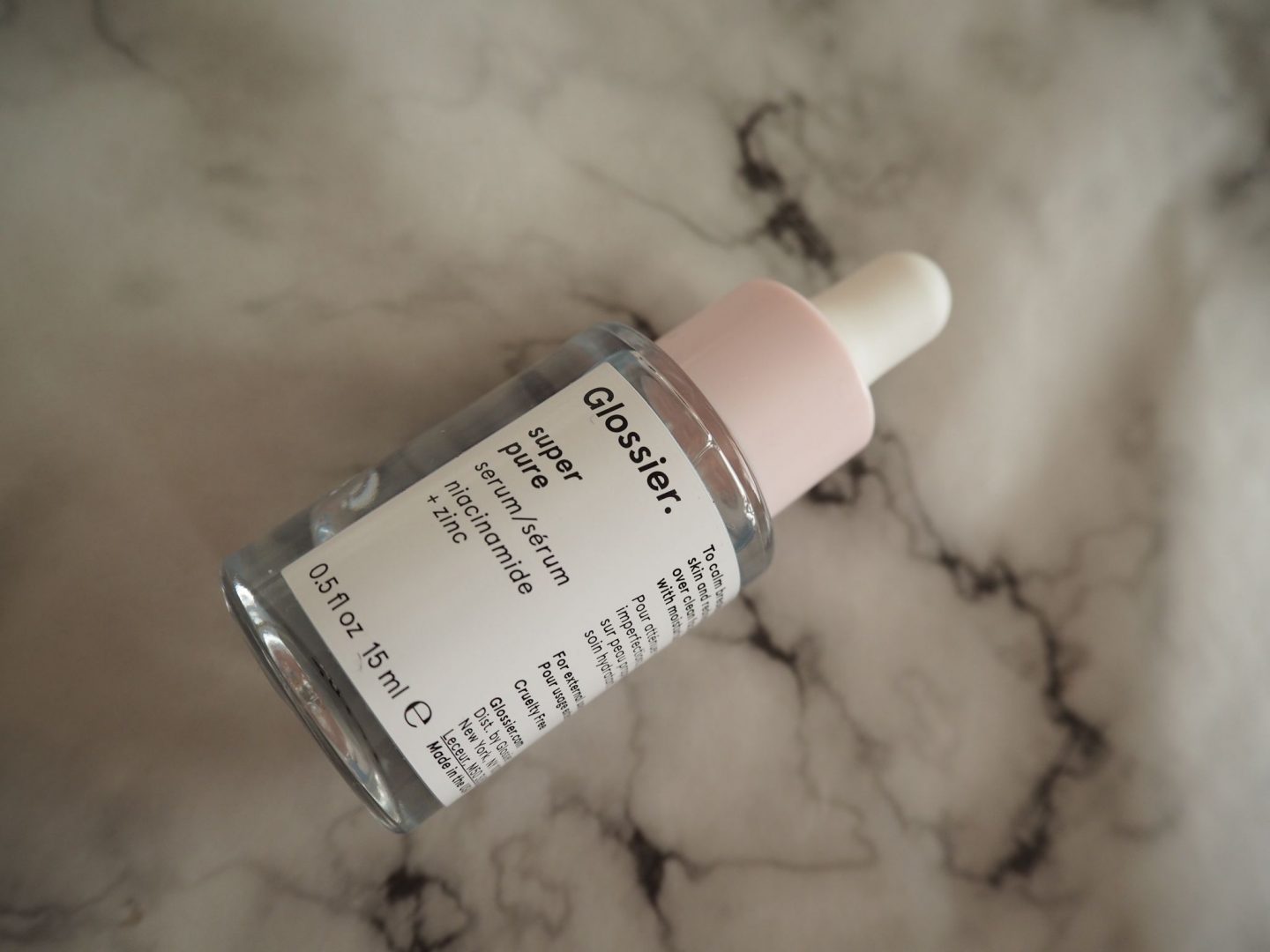 OK, so makeup and skincare go hand in hand but are overall two completely different ball games for me. 2016 and 2017 have been two fun years for me when it comes to makeup – 2018, however, is going to be my year of really, really focusing on skincare and how I can improve my delicate skin. Because I have the worst kind of skin – oily, at times dry and dehydrated, sometimes sensitive, prone to spots, blackheads and whiteheads, and textured. I could probably mention a ton of other things but I think that’s more than enough! So it’s fair to say that when it comes to skincare I want to invest in products and brands that are highly focused on problematic skin – and I’ve got the impression that Glossier isn’t quite there yet in terms of skincare. Having said that, I’d heard a lot of good things about the Super Pure serum and decided to give it a go. I haven’t even had it for a week so it’s really hard for me to give any sort of feedback about it – it doesn’t seem to have caused any bad reaction to my skin, ALTHOUGH I did get a few very tiny superficial spots today. This has not necessarily been caused by the serum, so for now I will have to remain neutral about this product. I might try to write up skincare posts in 2018, so hopefully I will be writing about it again… If you’re curious, have a look at all the reviews on Glossier’s website. 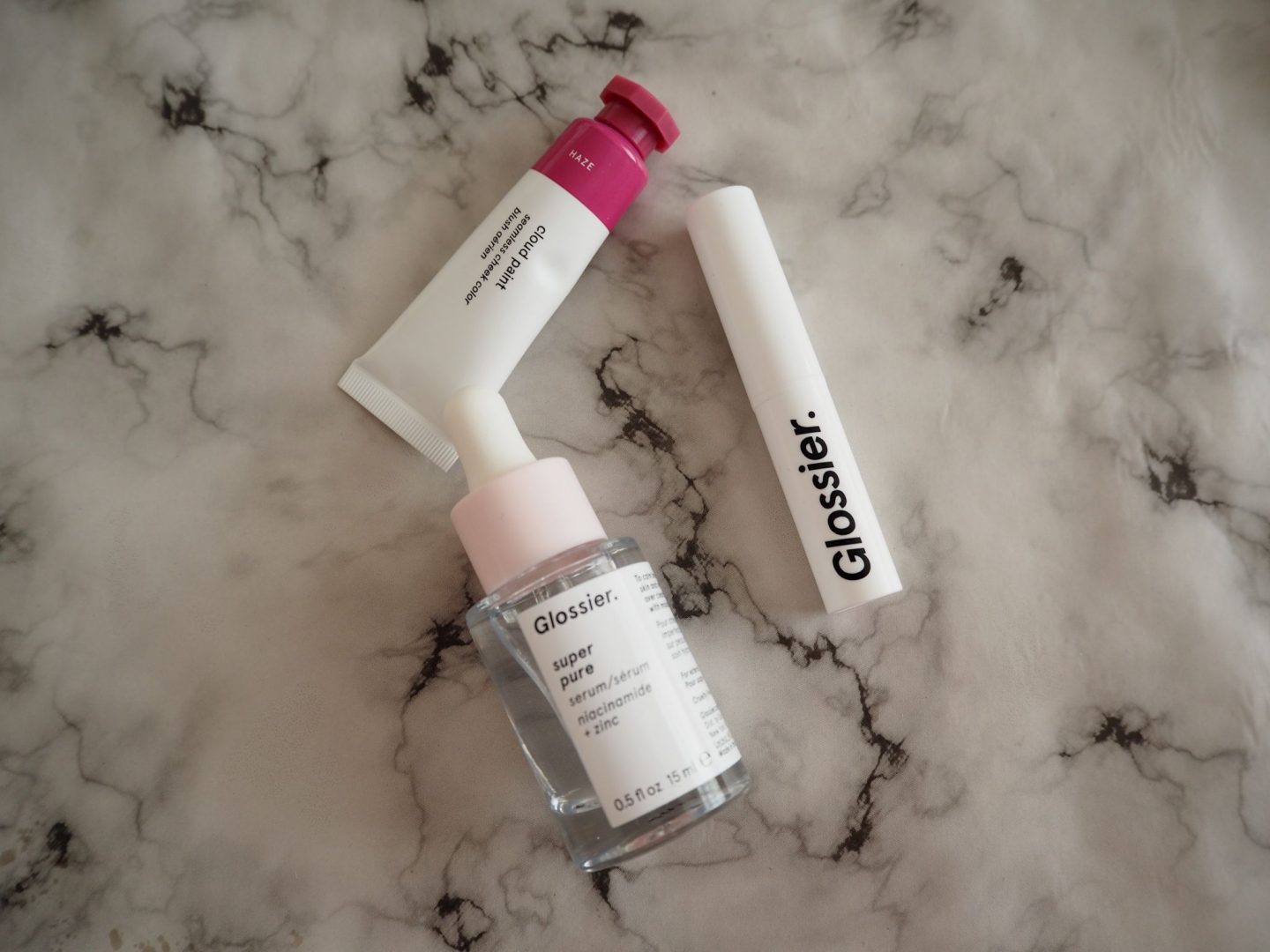 My overall verdict? I’m pretty pleased. Is it worth the hype? To an extent, yes, but I would naturally recommend buying just a few things first rather than going all in. And, of course, do a TON of research beforehand. I’ve learned my lessons about beauty hypes and it’s always better not to fall hard for them straight away, because it’s likely you’ll be disappointed!

At the moment there are a ton of opinions out there about Glossier and it can be a little overwhelming – personally there are three videos I would recommend and that really helped me when deciding about Glossier. The first one was The Anna Edit‘s review (Anna has dry skin), followed by Ingrid Nilsen’s review (Ingrid has oily skin), and Caroline Hirons’ (the facialist/beauty guru who did this video a few months before Glossier landed in the UK) review.

There was actually so much more I could say but I think it’s best to wrap it up now, as I don’t want this post to turn into a novel. So, to wrap things up nicely, Glossier are actually offering 20% off today – this overdue beauty post was meant to be!