Happy April peeps! I think I have made this statement every single April ever since I started this blog but I don’t think I’ll ever tire of repeating it – April is my favourite month of the year because spring really is in the air – even in London! It’s finally warming up so what better way to celebrate the early days of Spring than with a Spring-ish outfit?

These pictures were actually taken two weeks and one day ago – coincidentally on the first day of spring! Apologies for the picture overdose but I just really like them and there are quite a few newbies that I wanted to showcase and talk about… 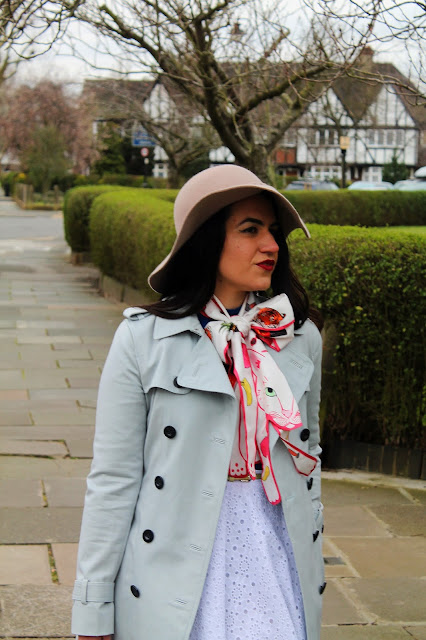 First up, this trench coat. I bought it either at the end of February or beginning of March and even though I have only worn it once I am quietly obsessed with it. The reason I haven’t worn it much is simply the weather – it’s a lightweight piece so I need it to get a little warmer. When I wore this two weeks ago it was still pretty chilly, but I just couldn’t wait to use it so layered up (reasonably) sensibly! 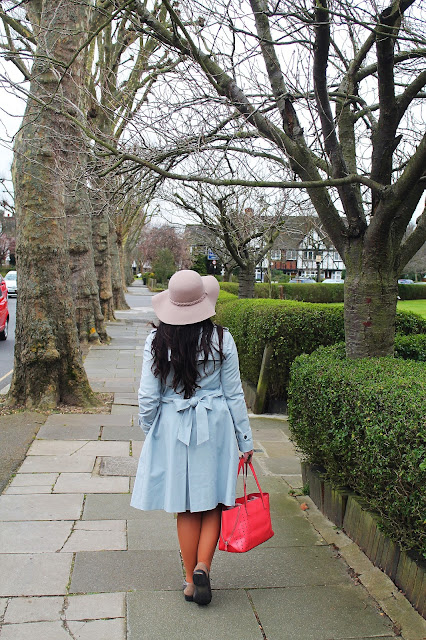 This trench is pretty different from the other outerwear I have in my wardrobe. Firstly, it’s a very grown up, age-appropriate piece (I guess I’ve made myself sound ancient). A little sophistication never hurt anyone, right? The long length at first scared me a little but it hasn’t stopped me from loving it to bits – I might make a point of wearing it with heels. 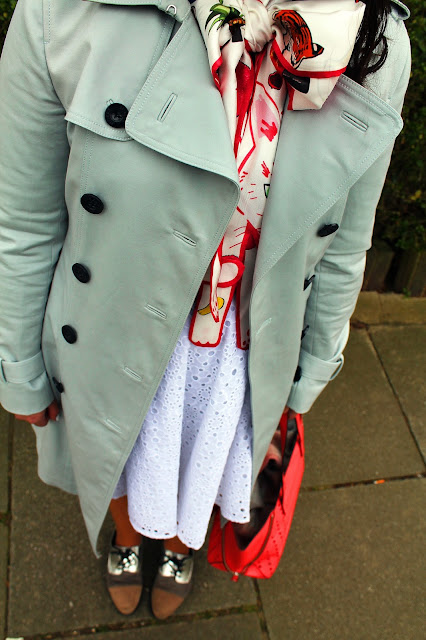 I definitely see it as an investment piece – I hope it lasts for a long time because I can totes see myself wearing this when I’m in my thirties, forties… and beyond? Fingers crossed.
My friend bought it for me with her discount for friends and family and it seems to have only just sold out as I think it might have come out not this autumn/winter just gone but last spring/summer… however the same style in different colours is available here. 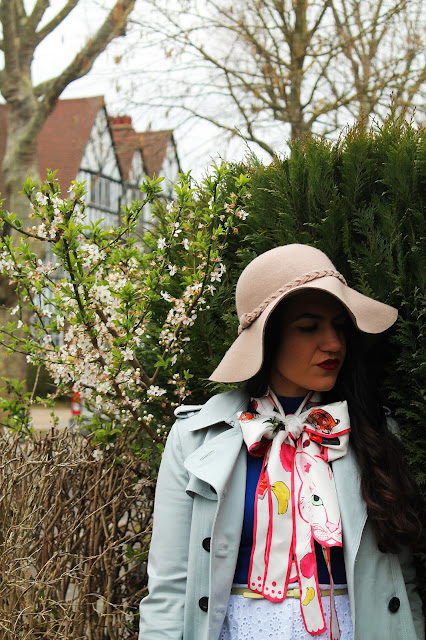 And what do I normally do with elegant, classy pieces? I jazz them up, of course… 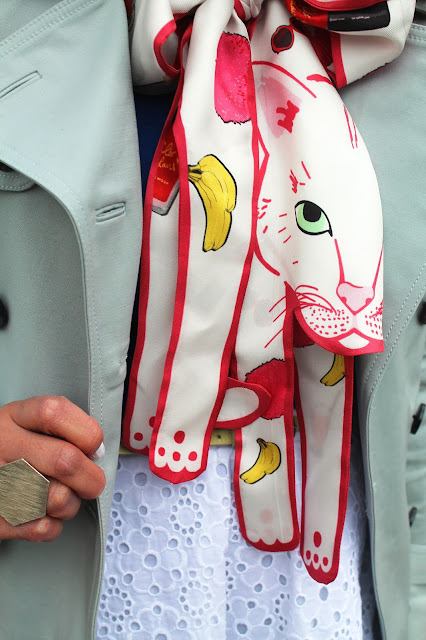 Say hello to my ridiculously adorable cat scarf by Cleo Ferin Mercury. I discovered this young and British scarf brand in the magical world of Instagram over a year ago and treated myself to two of its designs – I preordered this white cutie all the way back in October and got it in February. He was worth the wait! I cannot think of a better way to instantly liven up a simple outfit – it’s bold and brash but so freakin’ cute. 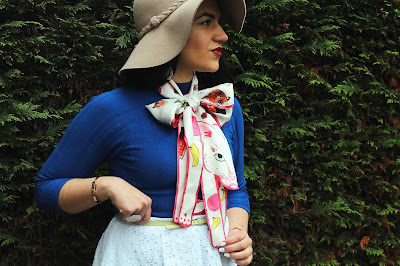 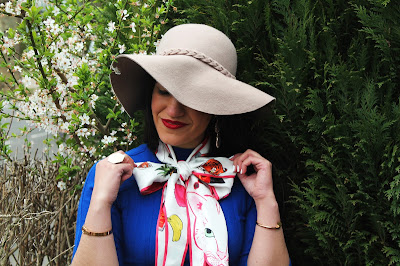 A giant bow scarf around one’s neck? Not as impractical as it may seem. I might have to do a separate post on this scarf and its other brother (you can get a glimpse of it here), just because I am so delighted with them and they deserve a post of their own, don’t you think? 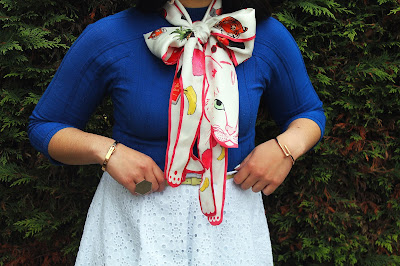 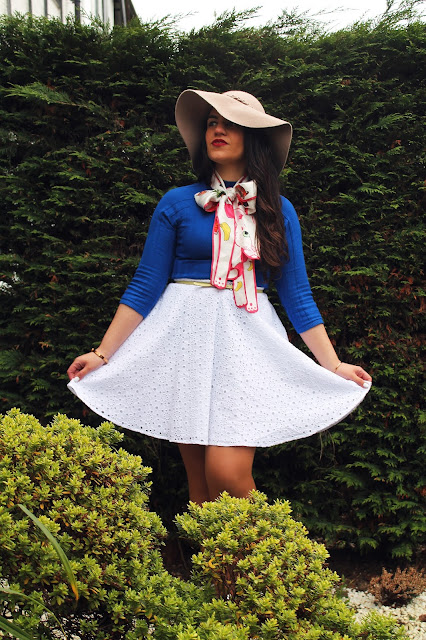 Finally, the skirt. Long before it became a super hip and super influential brand thanks to Jeremy Scott, I was obsessed with the brand Moschino. My dream is to one day have a closet full of Moschino pieces – if they’re vintage, even better. So when I spotted this skirt by their diffusion/little sister brand, Love Moschino, on the danger that is The Outnet last month with a surprisingly reasonable price tag, I just couldn’t resist. 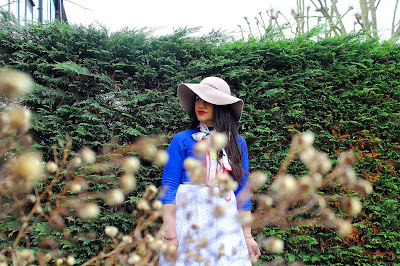 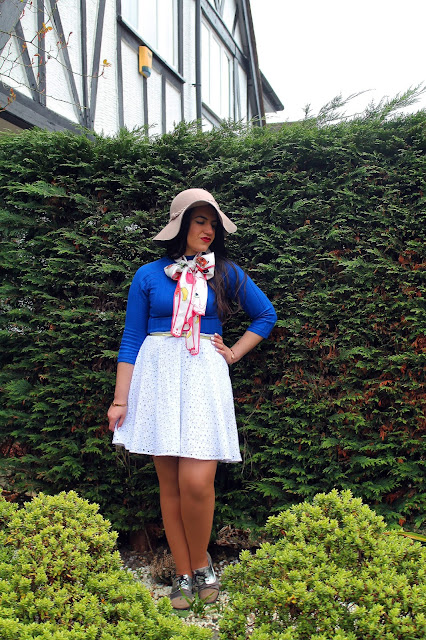 There’s something about white skirts that I absolutely love – I suppose its their freshness and obvious versatility. I was worried this skirt would be a little long for me but I think it works – it’s probably going to be one of my favourite pieces for summer. I love the broderie anglaise effect and flared cut – my friend said I looked like a lost Georgian/Victorian (as in the eras) child, which for me was a fab compliment. 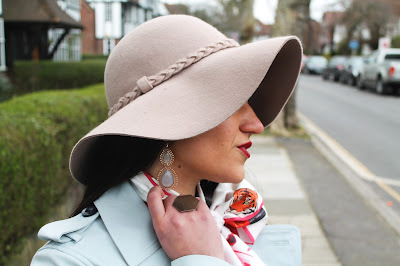 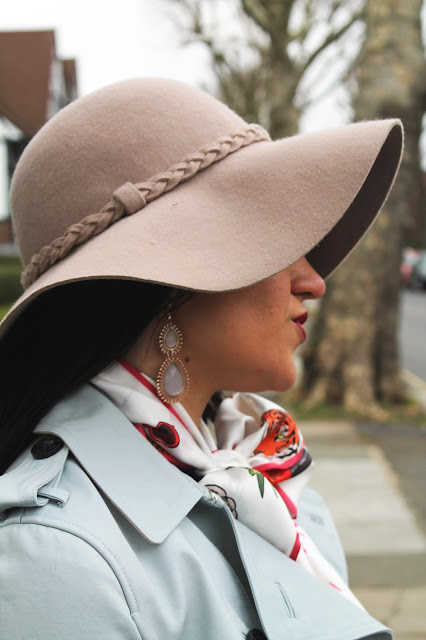 I have fallen in love all over again with long statement earrings, and can’t get enough of this pair by Parfois. 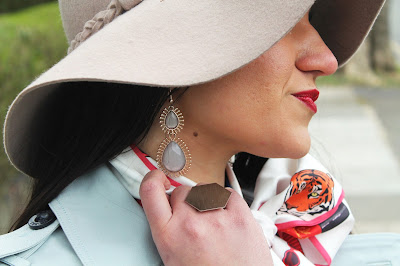 Spot the tiger… that’s one of the things I love about Cleo Ferin Mercury’s scarves, they’re just full of quirky details. 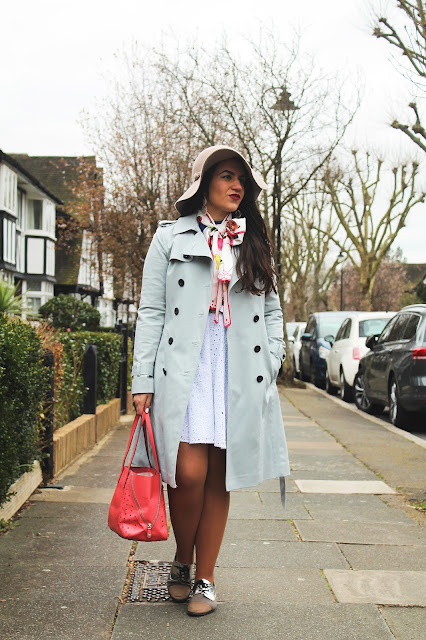 Note: I specifically wore nude tights on that day because I thought: “My trench coat deserves nude tights“… I hate pastels mixed with black tights so I went ‘all out’ and decided to suffer with two layers of nude tights (hence the super orangey effect!) for the sake of fashion. Totally worth it, because it was a bit nippy but not that bad. However, I went back to black tights the day after and am yet to officially do the switchover from black to nude. I think this time last year I already had though, so I better get a move on as it’ll be May soon enough!