This might not be most cohesive outfit post from an aesthetic perspective, but it had to be done. I mean, how could I not include a bunch of fairly varied shots from the beauty that was Winter Wonderland 2018 (and early 2019)? I went there with the bf last weekend (the day before it came to an end) and really, really wanted to showcase some of the pictures we took somewhere other than just Instagram. 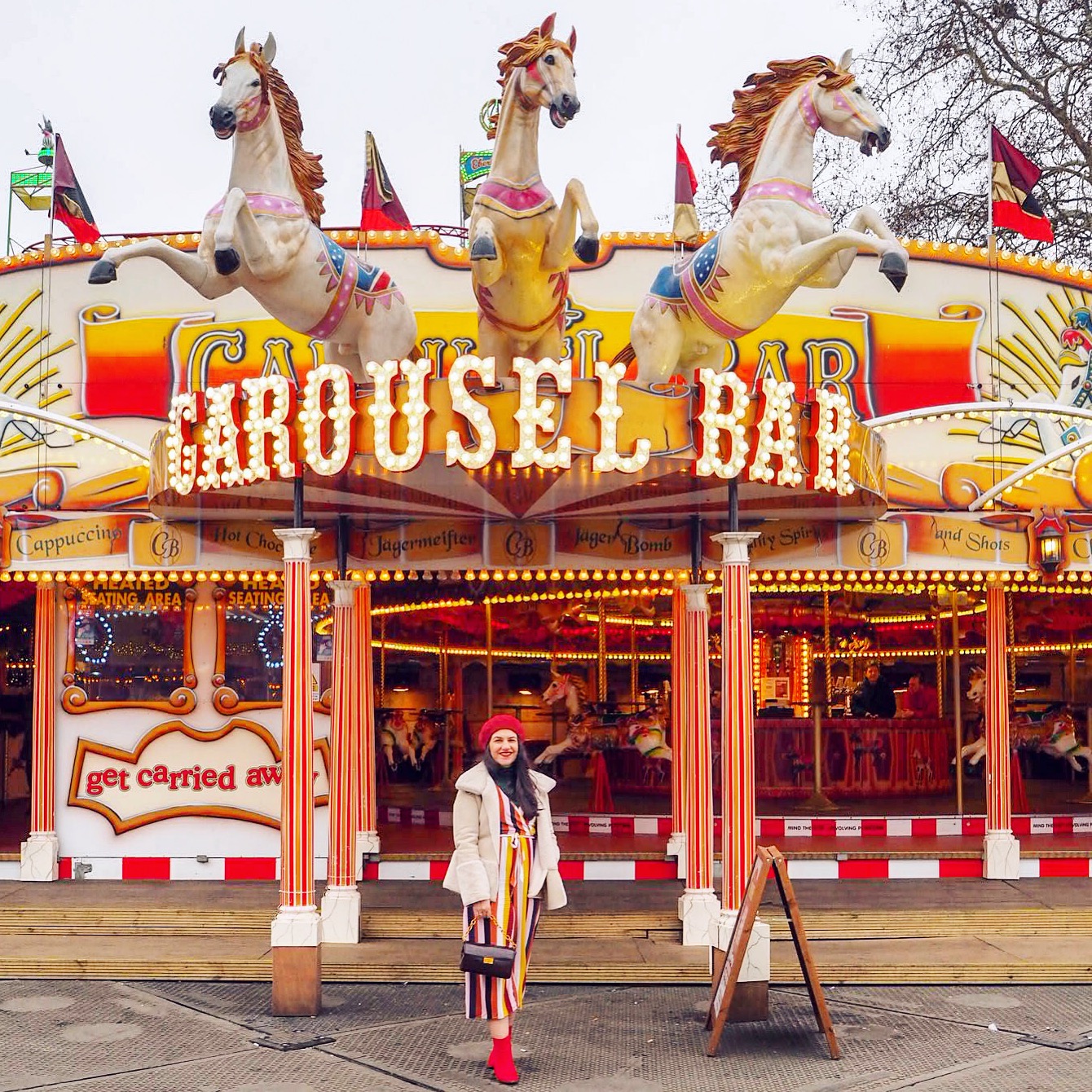 Having said that, I am sort of going to contradict myself and start off with this picture that I did in fact share on Instagram because carousels are the bomb, am I right?

I sort of remember what the first time I went to Winter Wonderland was like – I wasn’t impressed. I probably hadn’t been living in London long enough to be used to walking around in the cold for a couple of hours at a time and just didn’t find the whole shebang that appealing. So let’s just say Winter Wonderland did not become a tradition for me – in the thirteen plus years that I’ve been living in London I’ve only ever been a handful of times and can’t even remember the last time I was there before 2018.

I’m a Grinch at heart but this year I really don’t know what happened to me – I found myself almost liking Christmas. I know, shock horror! And when some friends suggested a meet-up in Winter Wonderland last month, enough time had passed for me to give this place another chance. As it turns out I have zero regrets, because hello hot dogs and beautiful photo ops. Have I lost my edge? Is a part of me reverting to my love for fairground rides and cotton candy as a child? Was it all those shiny lights and oh-so-Instagrammable carousels? Also is it just me or has Winter Wonderland really, really stepped up its game? Whatever it is, I became basic and a Winter Wonderland convert – so much so that I made a point of going again just before it closed. 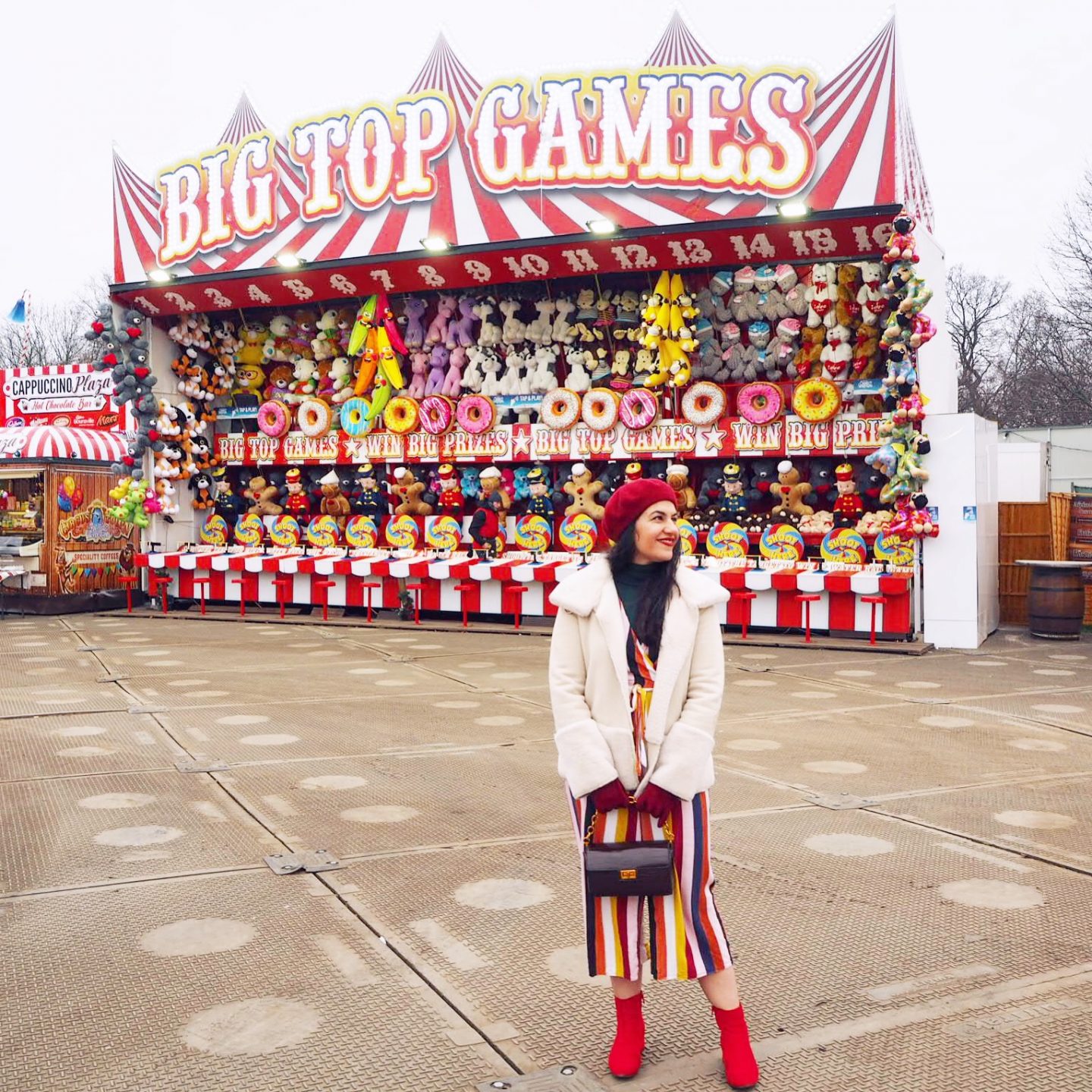 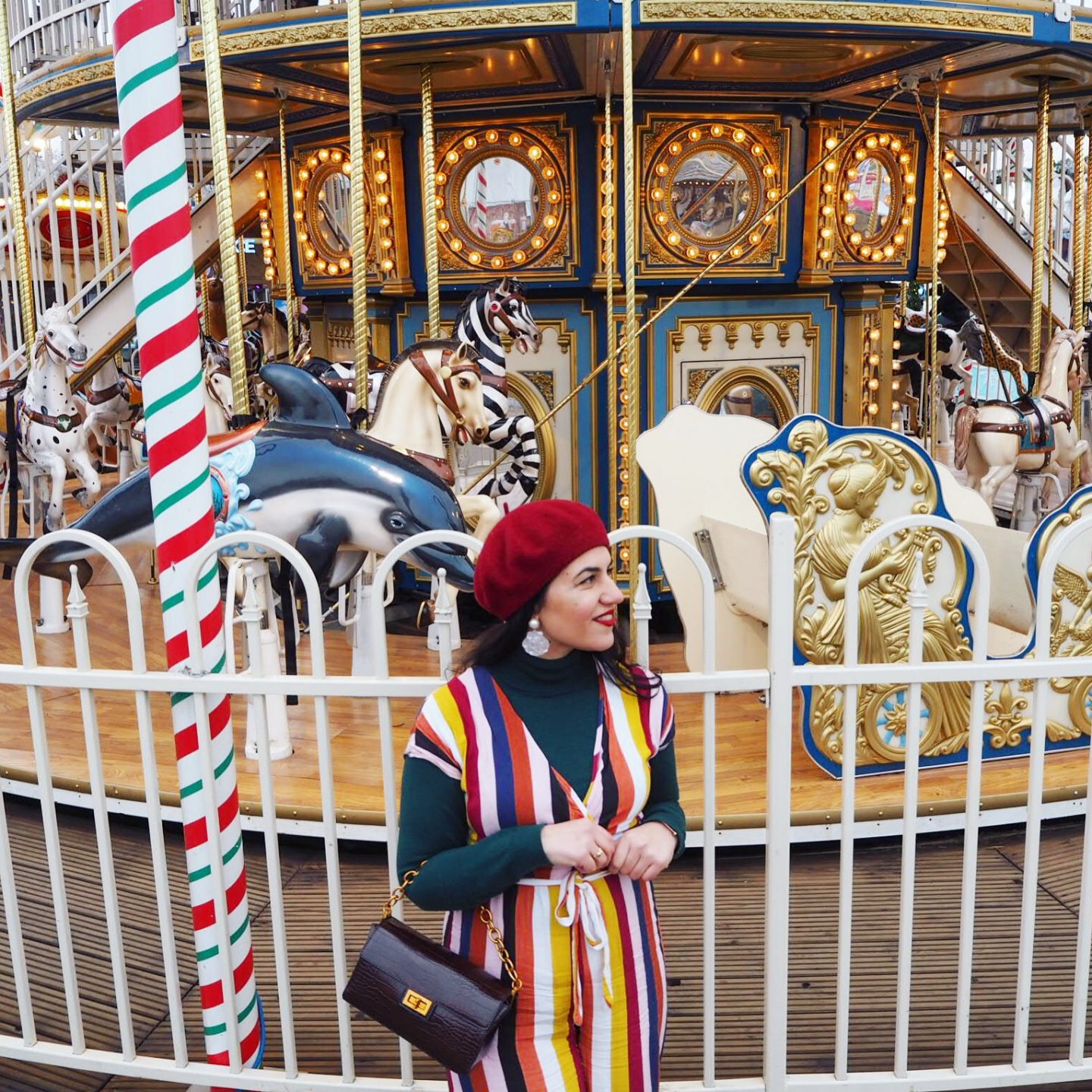 But let’s get to what really matters – what I wore for walking in a Winter Wonderland! And I don’t mean to sound smug, BUT I think these blocky stripes fitted in with Winter Wonderland’s colourful aesthetic perfectly.

Last year I had a small but significant style revelation – I started styling jumpsuits with turtlenecks, as you can see in these two Instagram posts:

That’s not to say that I now own a bunch of jumpsuits – I don’t, it’s pretty much just the green one from Zara shown in the first post (which I think I bought at the end of 2017), the polka dot one from New Look which I bought about three months ago and now this stripy one, bought either in September or October of last year. Three jumpsuits, three prints, three very different pieces – but they all look great with turtlenecks. 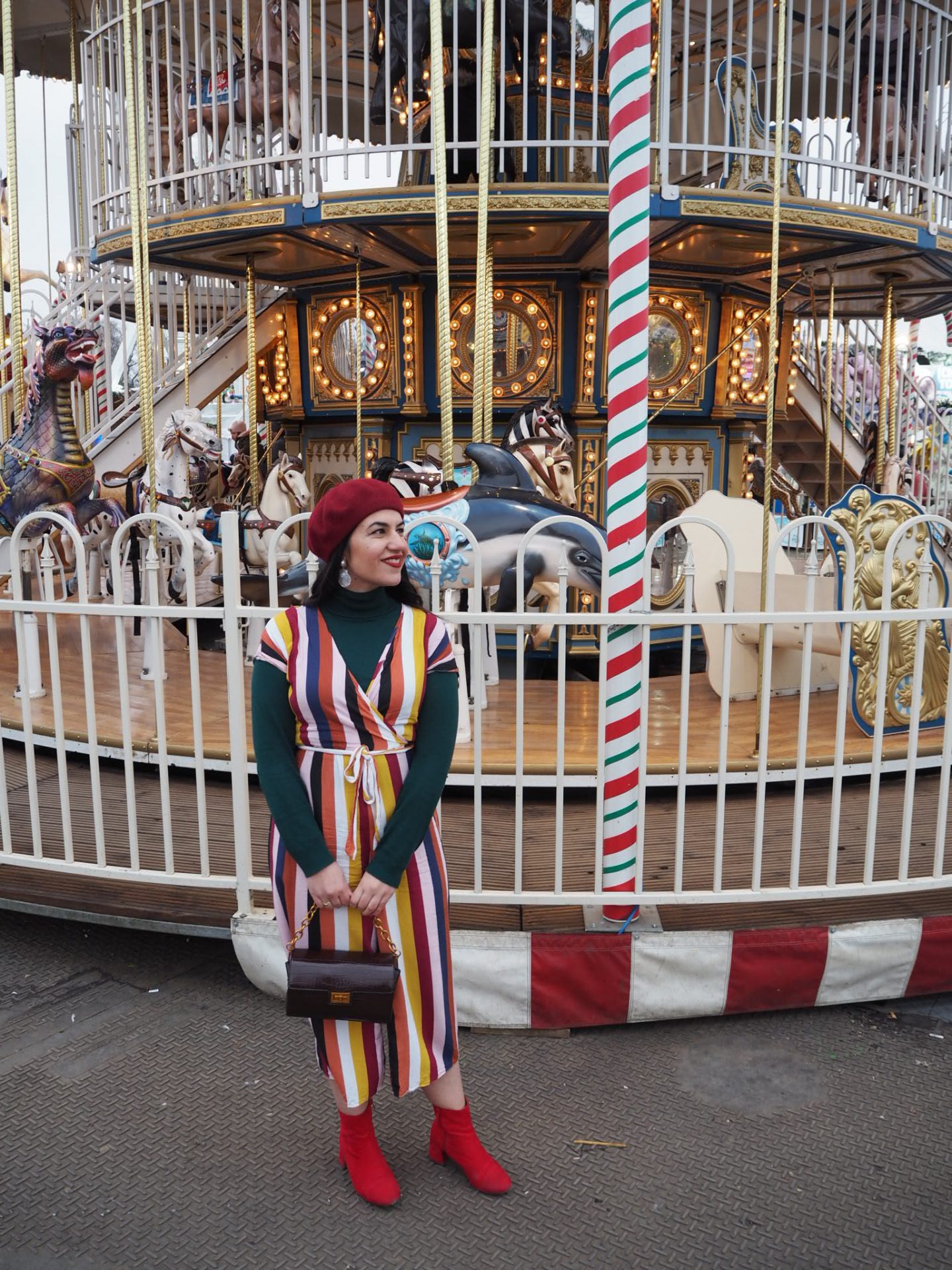 I know I’m late to the party with this ‘styling hack’ (God, that’s such a YouTube thing to say), but styling my red turtleneck with my green jumpsuit in January of last year is probably what made me get into jumpsuits again. This striped jumpsuit in particular was a spontaneous buy from Primark – I got to wear it a few times with a vest top (the V-neck is a little low for me to wear it without one), and now that it’s chilly it’s the perfect time for a cool layering effect. It’s not something that necessarily works with every style of jumpsuit but when it does, I think it looks amazing. It also adds a ton of value to a jumpsuit, as it means you can wear it pretty much all year around! Although I actually prefer how my green and polka dot ones look with turtlenecks. 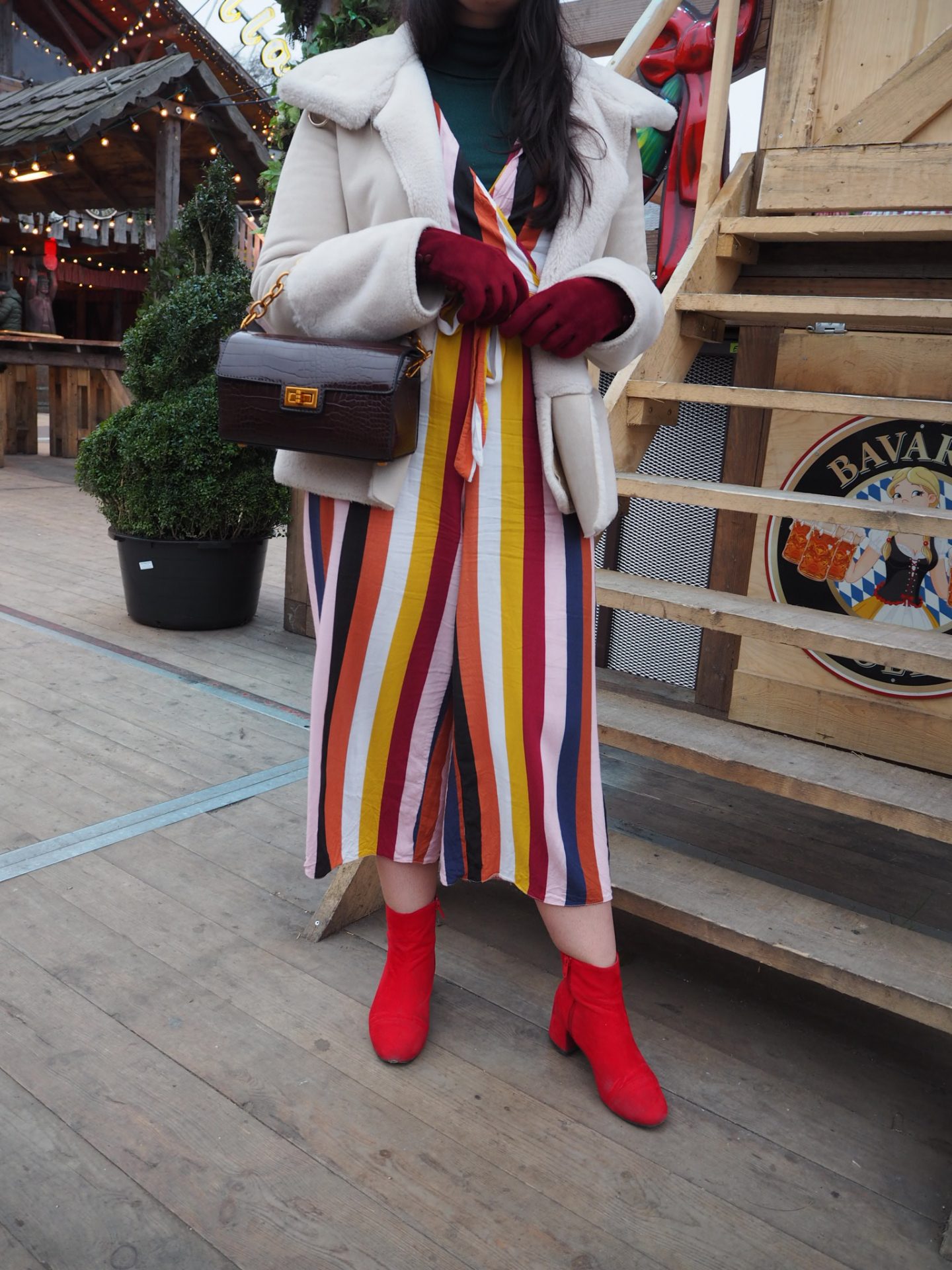 Ankle cleavage, anyone? It seems like I really am all about that cropped, wide-legged life! I committed to letting my ankles get cold this winter and so far I have no regrets – and I am yet to catch a cold. 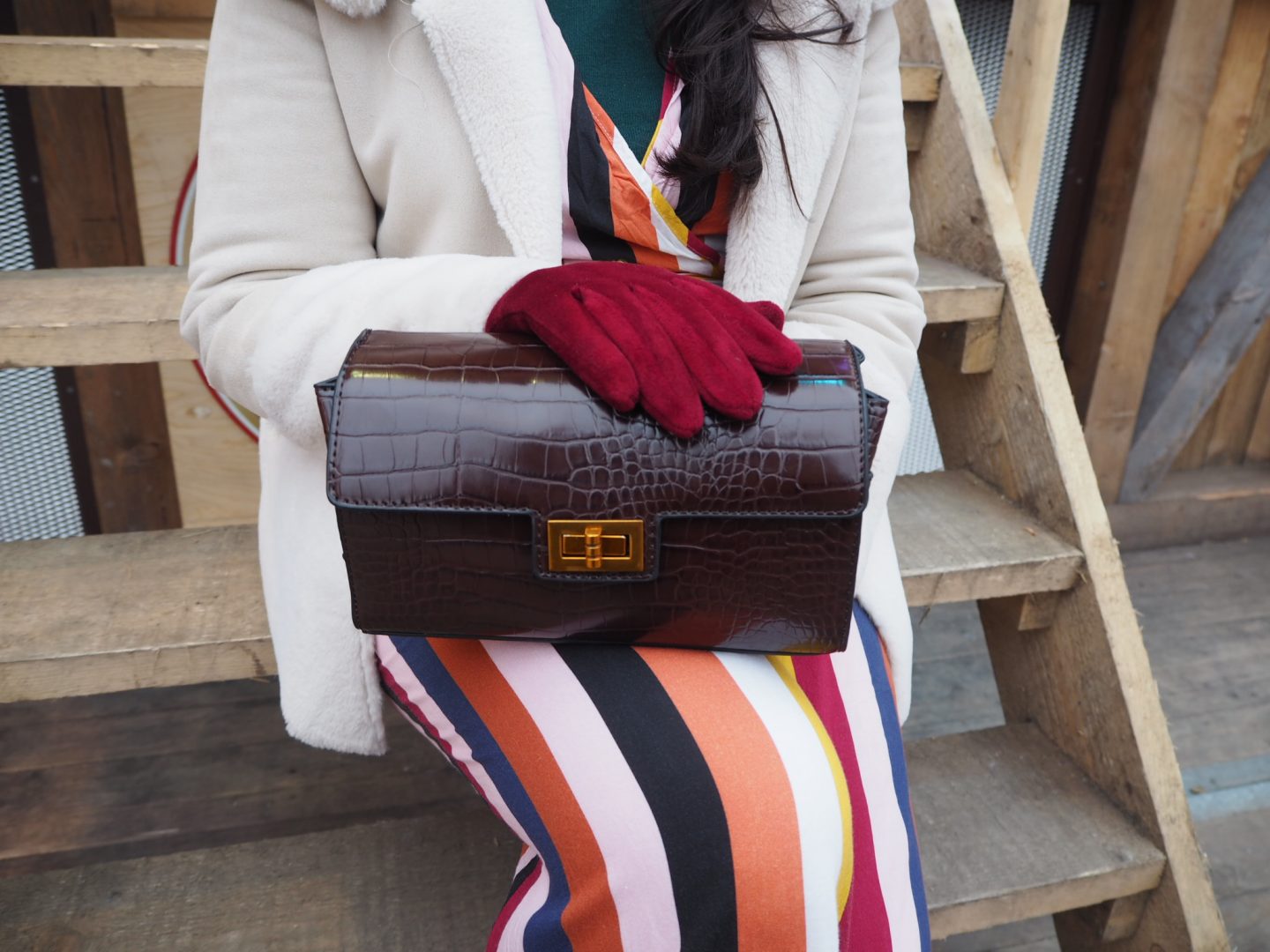 I really, really have to do a bag clear-out, since in 2018 I went CRAZY about bags, with this little beauty being the last one I bought. I didn’t think I was a fan of crocodile effect skin but then I laid eyes on this piece and I was instantly brainwashed. I think I’m drawn to it because it has such a vintage look – I wouldn’t be surprised if the ASOS design team basically copied a bag found in a vintage store. I’m actually a little annoyed with myself because damn, maybe I should have just hunted down a style like this in a vintage store, but hey, I’ll make it a style resolution to shop more vintage in 2019. In the meantime, I’ll enjoy this little treasure box. 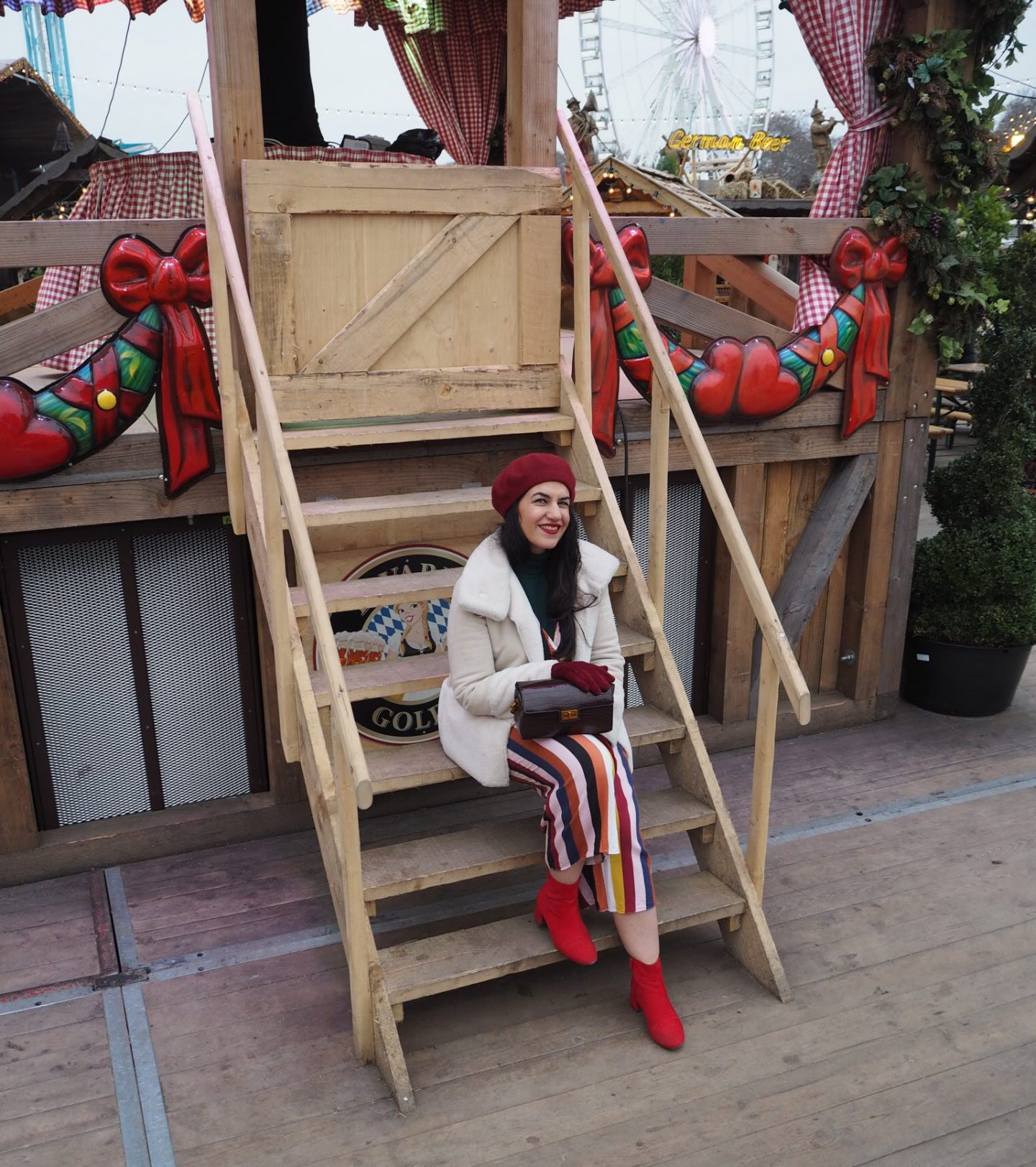 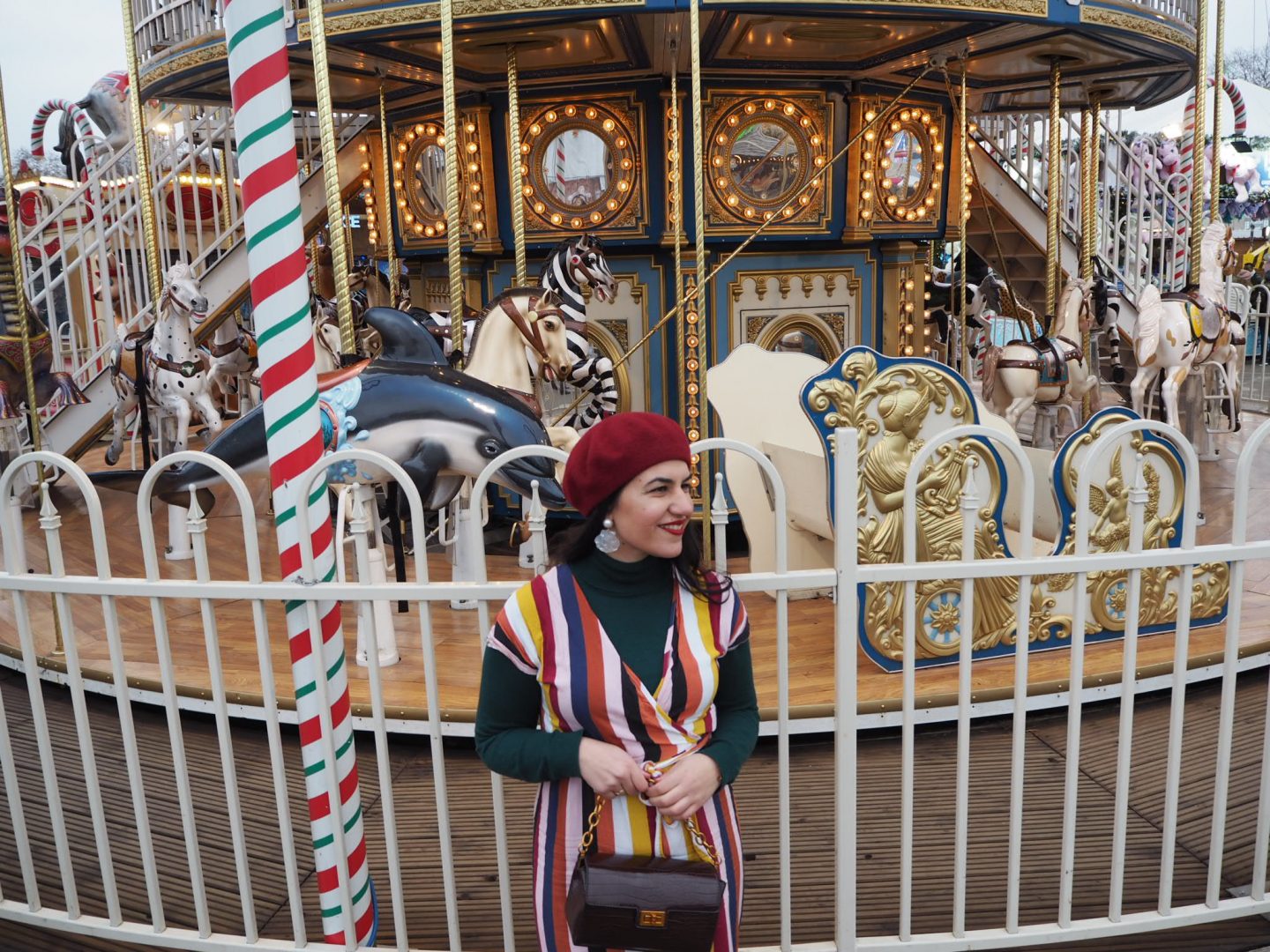 Shoutout to these earrings too, because how could I not treat myself to a pair of vintage-looking statement shell earrings? That’s another thing I went overboard with in 2018 – since statement earrings have been such a big trend and have been available EVERYWHERE, I couldn’t help but stack up on them. 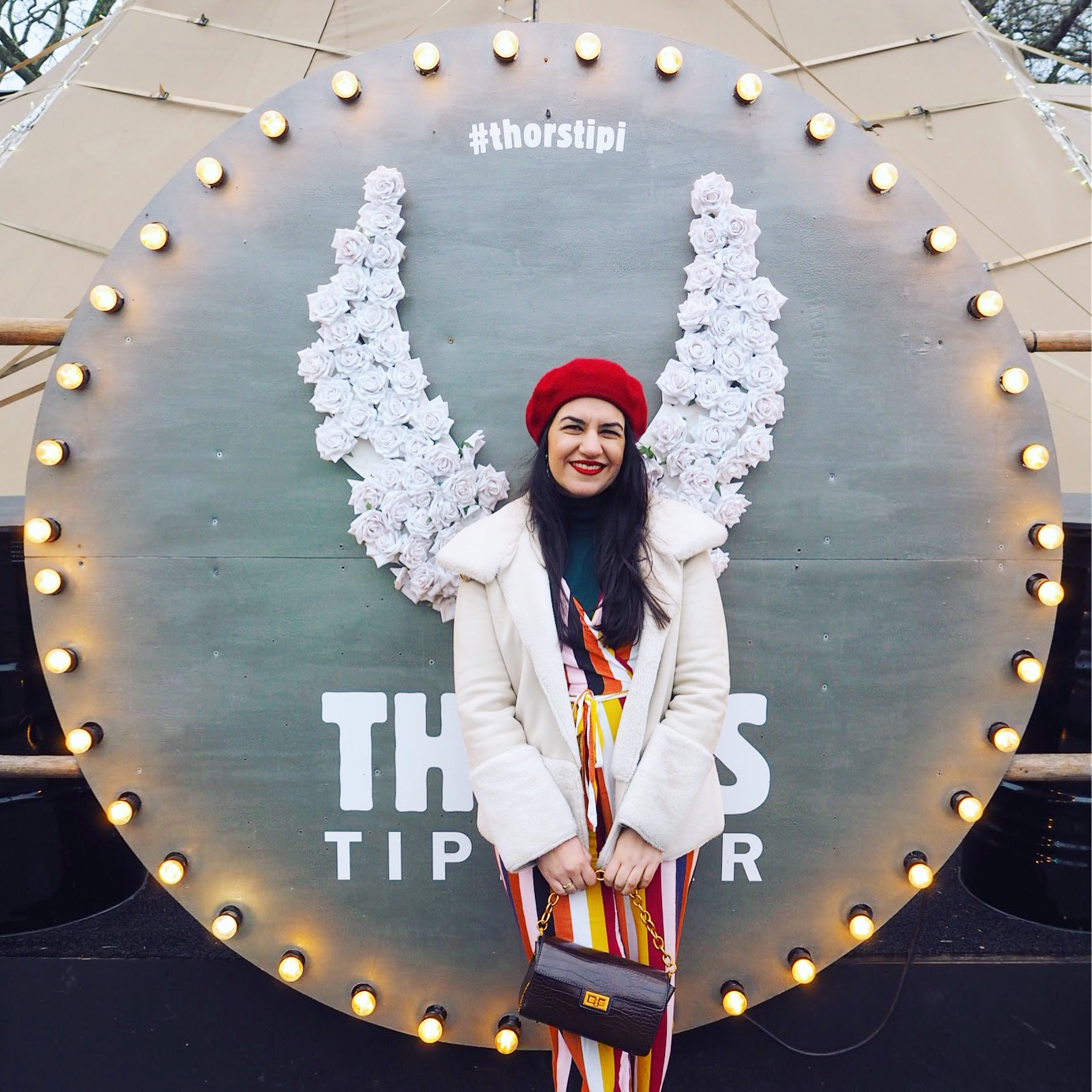 I’ve referred to my accessories as having a vintage feel, but I guess the whole look is somewhat reminiscent of the seventies – I guess I was serious when I said I was looking to be inspired by vintage styles in my A/W’18 style round-up post! 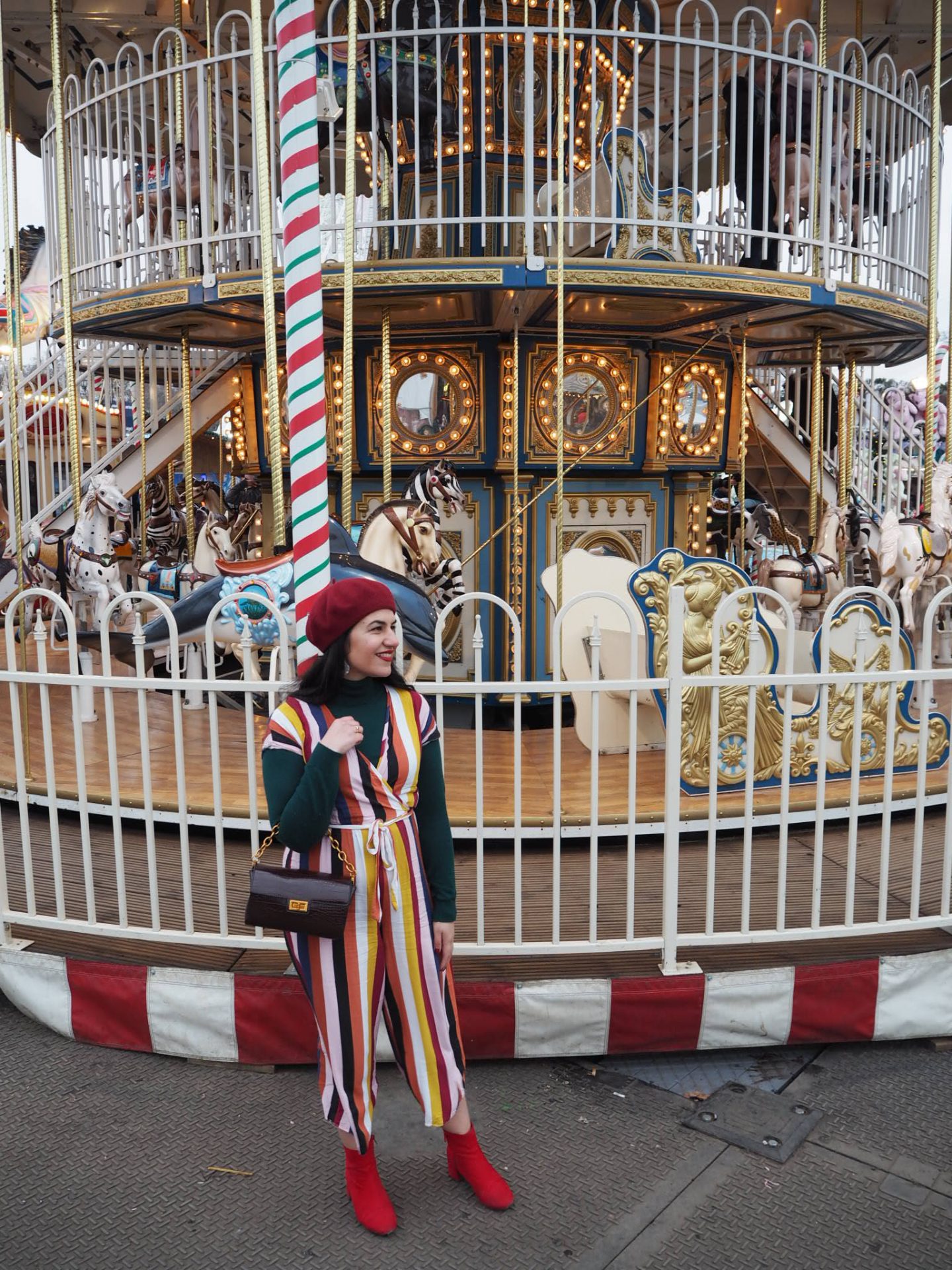 A few days ago I mentioned I had a mild case of the January Blues – well, those appear to be gone for now! Also towards the end of last year I really felt like I was in a bit of a style rut (as explained here), but thankfully I seem to have started 2019 on a good foot in that department. I’m loving putting outfits together again, I’m feeling pretty good about myself and my style and I’m being fairly cautious when it comes to shopping, choosing as carefully and sensibly as possible and making sure whatever piece I buy will be put to good use. So, even if I won’t have the cuteness of Winter Wonderland in the background, let’s see if I can get some good, winter-friendly outfit posts on the blog soon.

{Gifted item 💚} It may be Spring but I’m not

This rainbow was missing a splash of pink 💕🌈

LET’S FAST-FORWARD TO SUMMER ⏩🌞 This is the

Maybe she’s born with it... or maybe it’s that

Happy Birthday to the person who’s been my rock

Throwback to G&T sunsets in Madrid - who else felt

My heart says spring but these boots sing “Just