I’ll refrain myself from using the word “Always”, because using it would probably be a slight exaggeration – so for a very, very long time I have been a bit of a Scrooge when it comes to Christmas. To say that I’m not a Christmas person is an understatement – I cringe and pretty much mentally vomit when people come out with lines like “Only six weeks left ’till Christmas!” and hate the societal pressures surrounding this season. But what is it that stops me from being a full-on Bah humbug? The decorations. I freaking love Christmas decorations. Not so much home decorations, but more the ones you can find scattered all over a city, and specifically the city of London. I don’t like Christmas, I don’t like the cold – but I love how London looks during the festive season (FYI, I’ve written about Christmas window displays here and here). 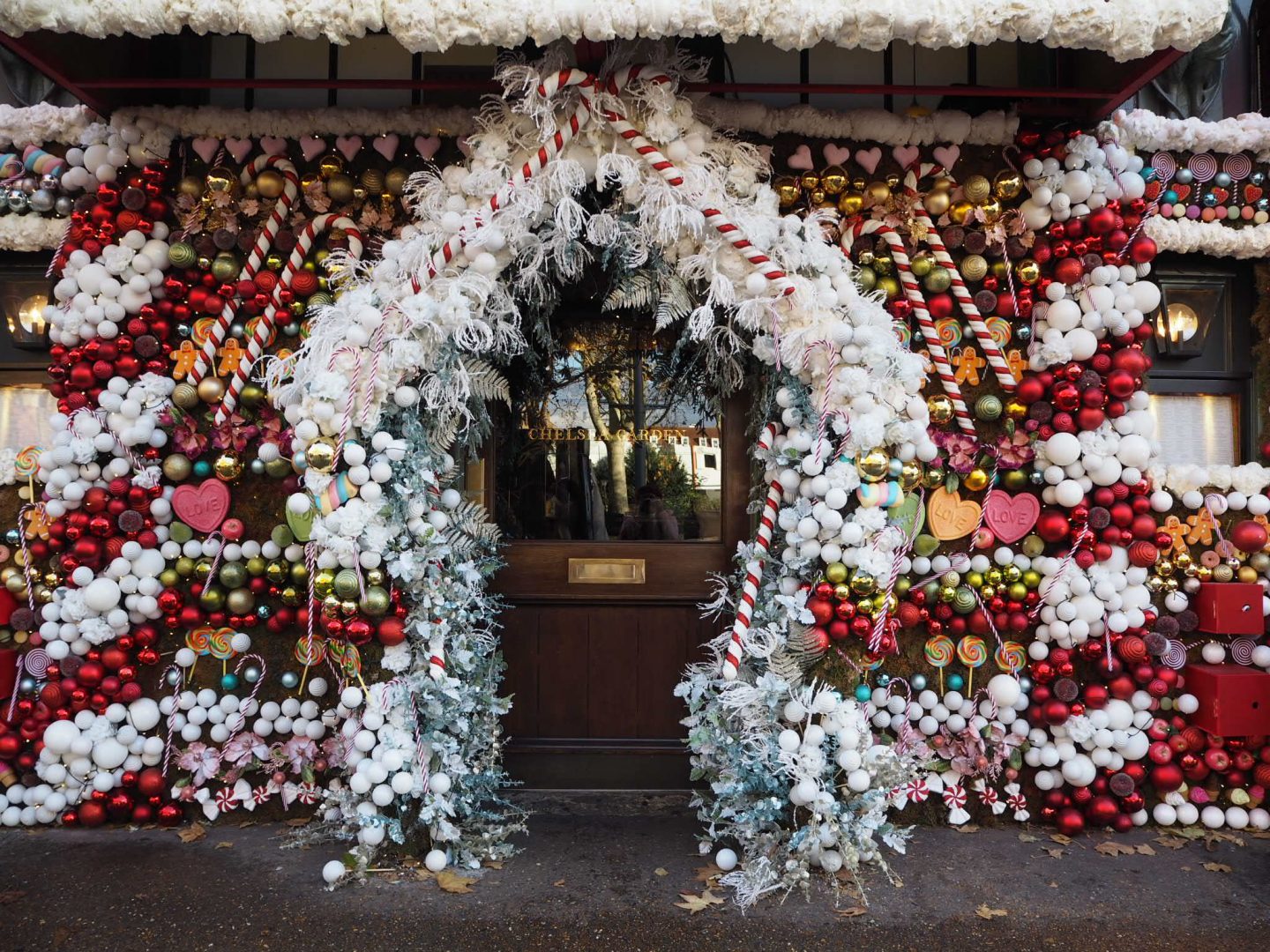 Yesterday my friend and I visited the Ivy restaurant in Chelsea, which has become one of London’s most photographed restaurants due to giving its facade a striking makeover every few months. The latest instalment is the absolute gingerbread house of dreams, and in my opinion, its best one yet. 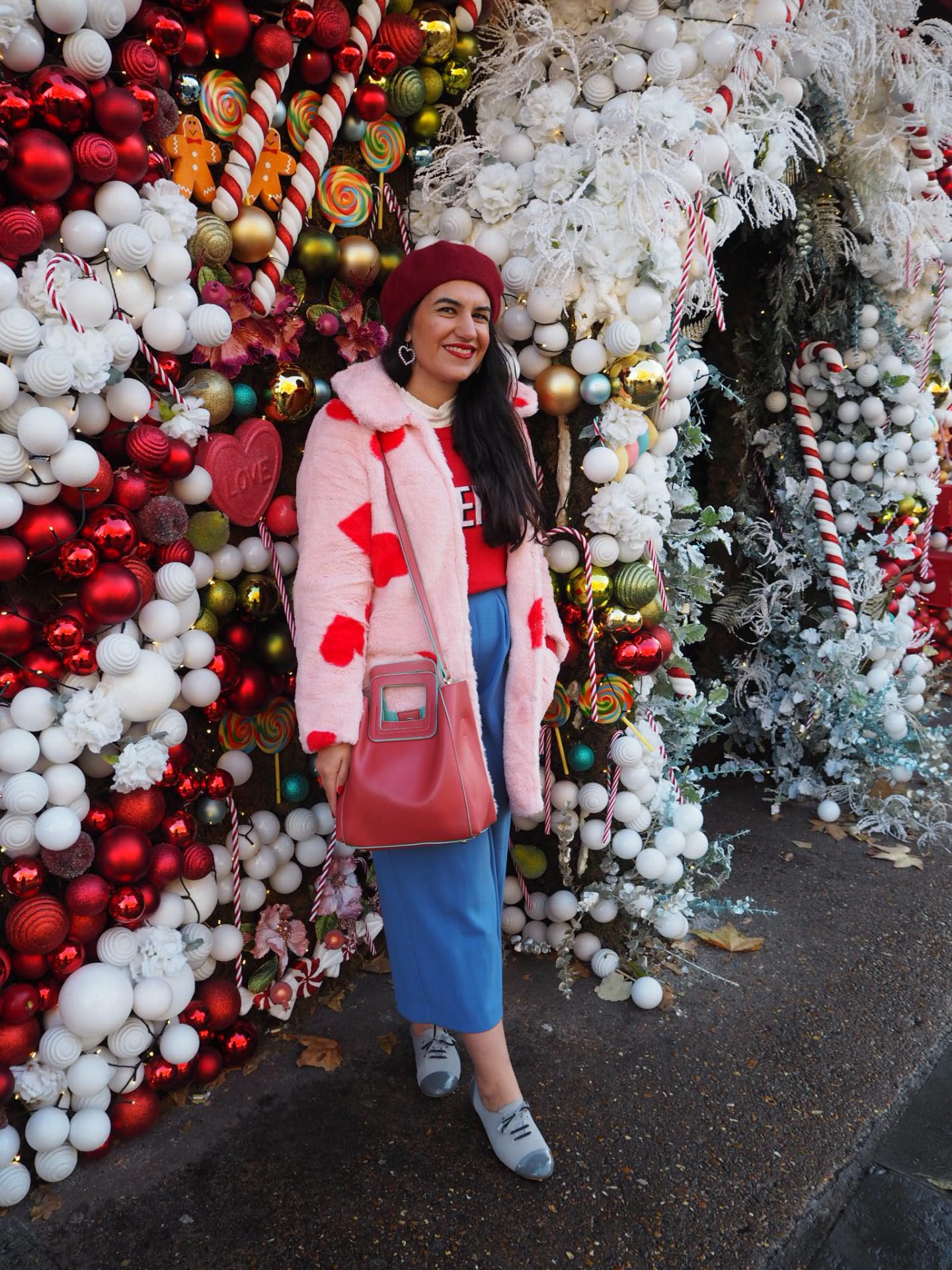 I don’t just love it, I am obsessed with it. I want to move in. I want to keep it. I want to hug it. I was so taken with it that I couldn’t help but force my friend to do a quickie photoshoot in front of it. Of course I wanted a picture for the ‘gram, but as we ended up taking quite a few pictures, I thought I should put them to good use and include them in a blog post. 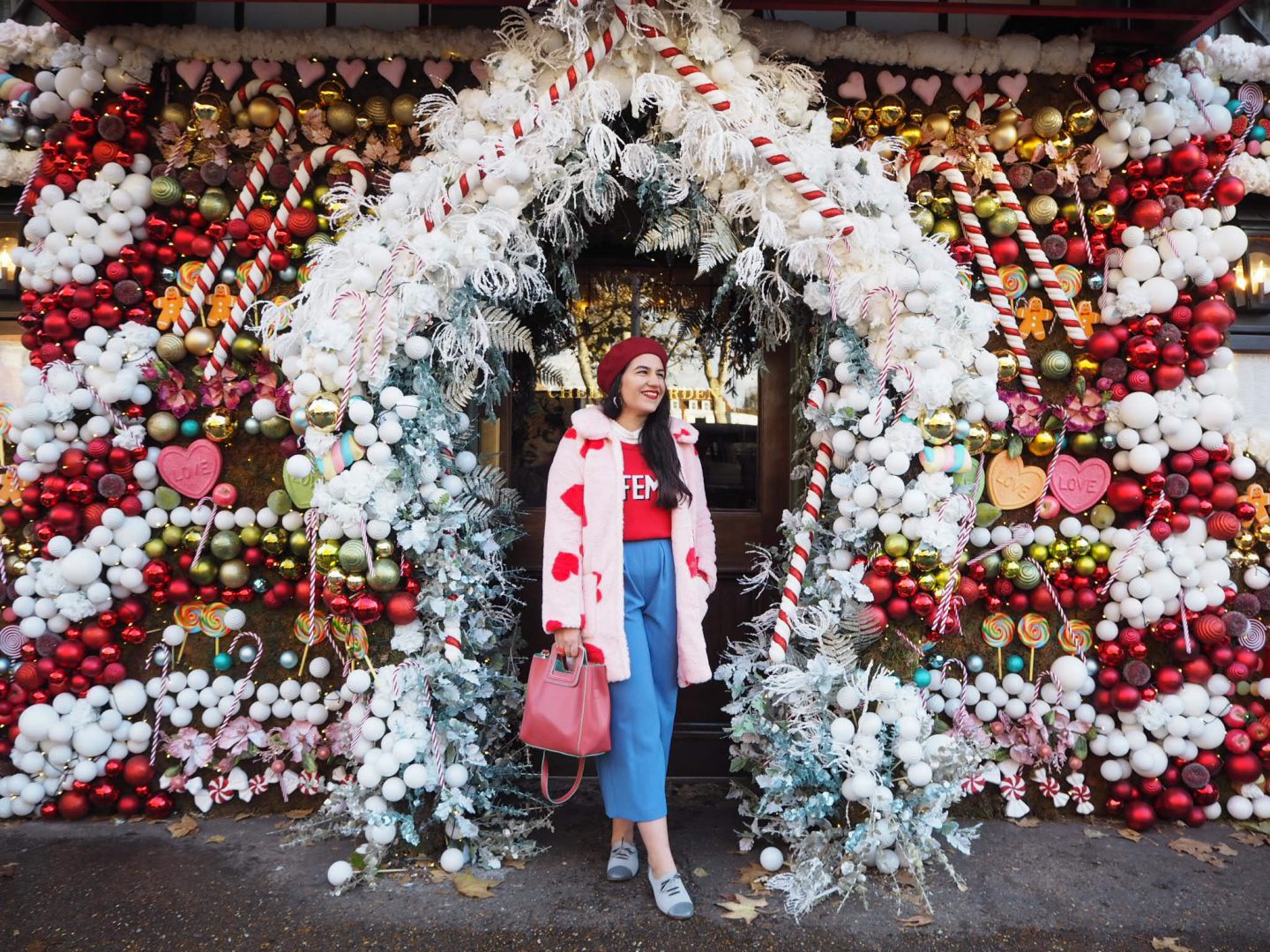 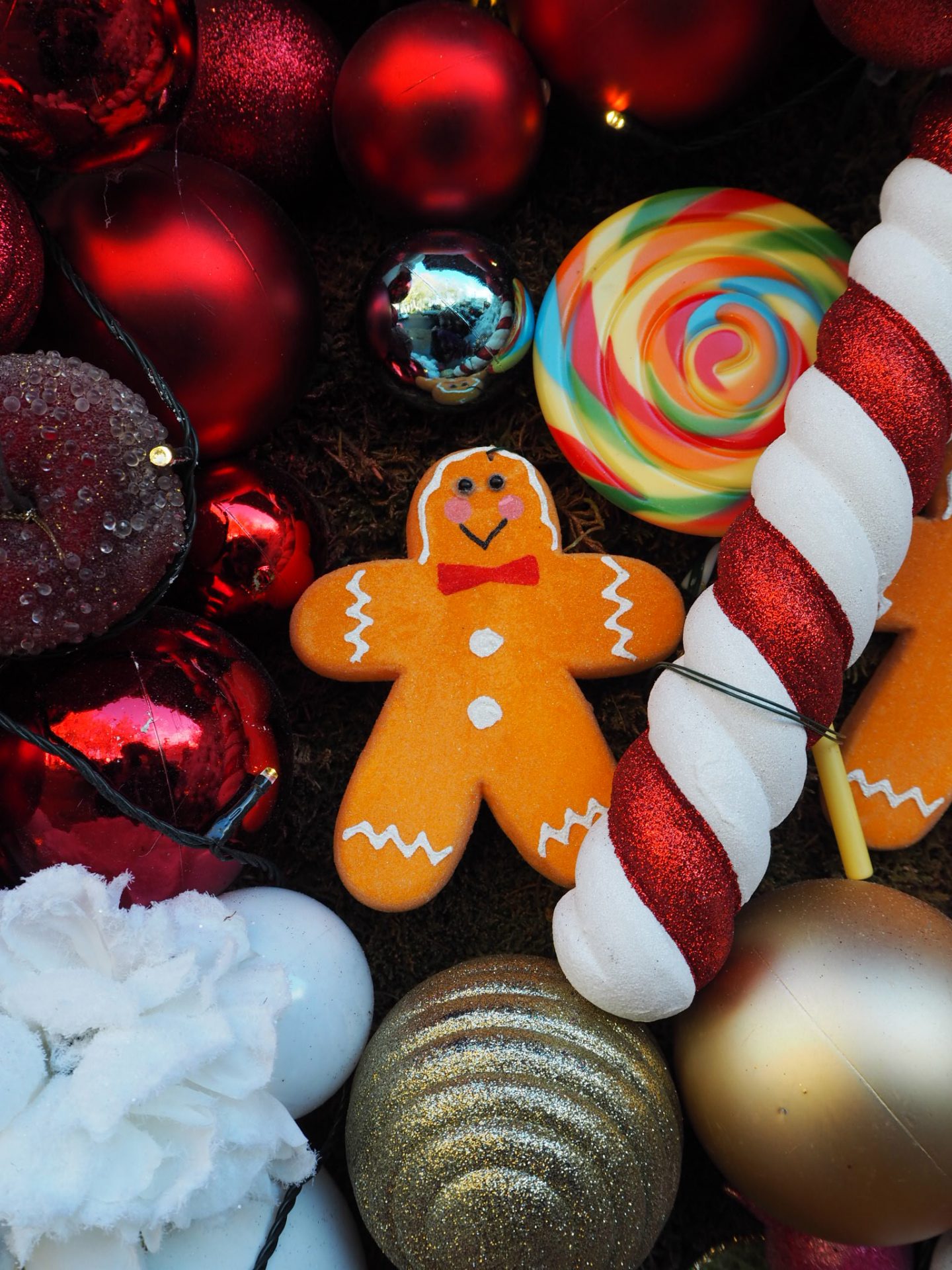 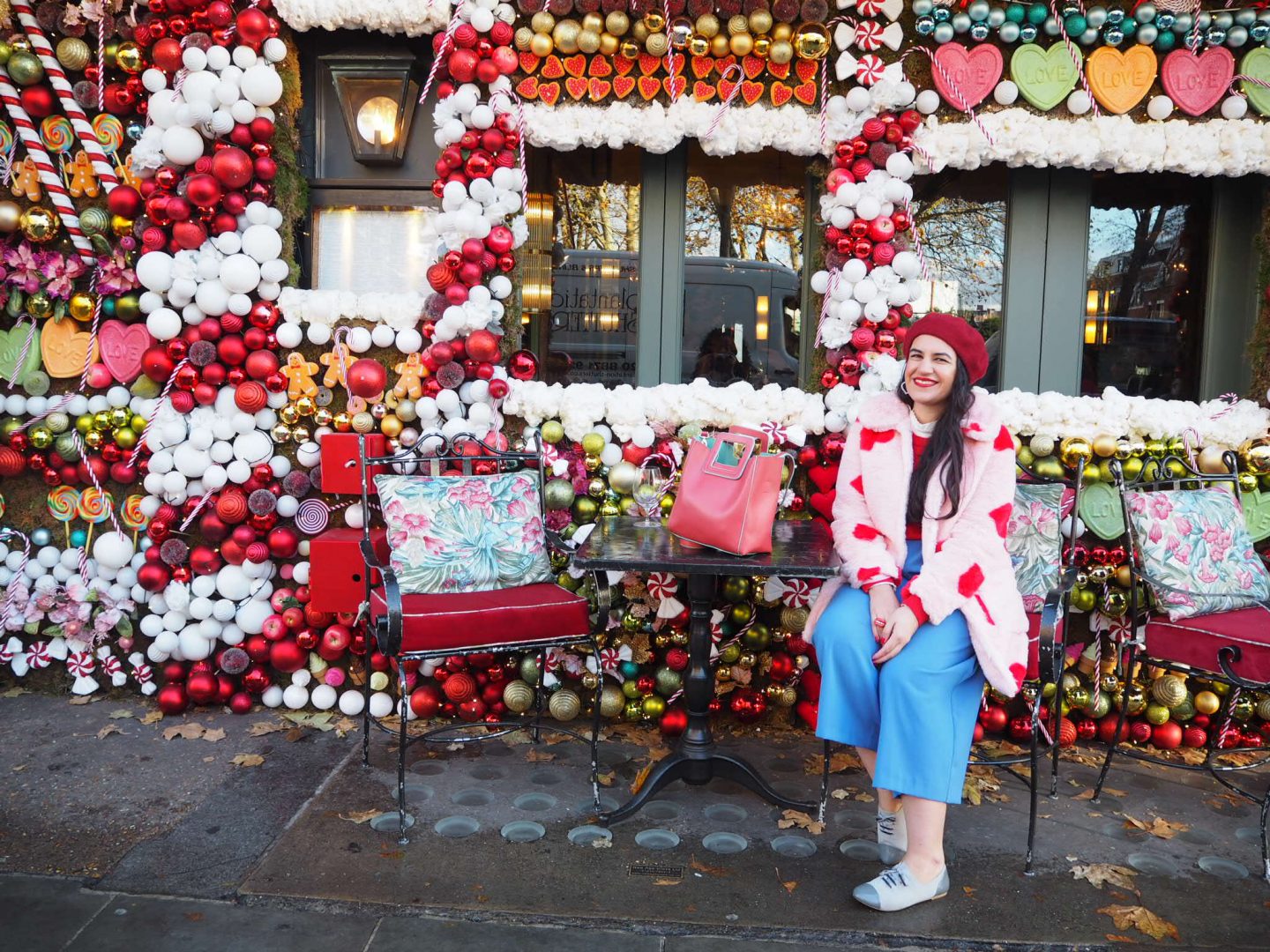 To be honest all I initially wanted to do was talk about this decoration, and not about my outfit. Because my outfit’s got nothing on this beauty. Look at those colours! The attention to detail! The love hearts! The candy canes and gingerbread men! As someone who has a very sweet tooth and has a love for bright colours and cute things, I could only ever wish to look as fantastic as this creation. But, having said that, I will briefly talk about my outfit, because I still think it’s cute nevertheless.

It was very cold yesterday but at least that meant I could bring out my Daisy Street heart print faux fur coat – which sorta complements this gingerbread house? I felt pretty cute and snuggly and loved wearing this coat (which got complements from two strangers – #validateme), which I teamed with a red slogan jumper that says “La Femme” bought much earlier this year, a silk blouse I got on Saturday at a Fold sample sale, these wide-legged blue trousers (a sale find bought last month), these super old brogues, my red beret and red bag. I’ve decided I’m cool with the wide-legged look and letting my ankles freeze this winter – in fact, I overall felt pretty cool in this outfit. 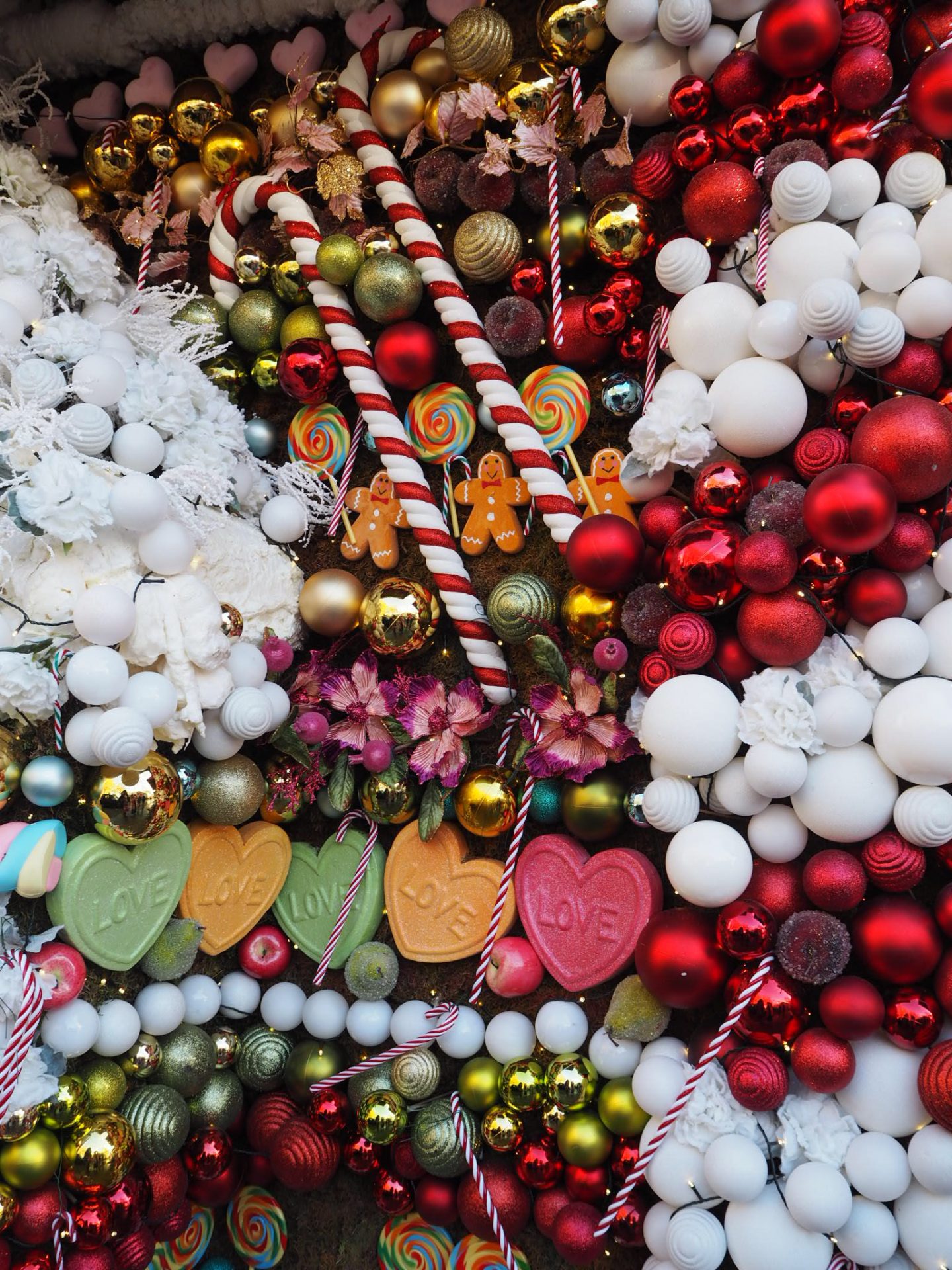 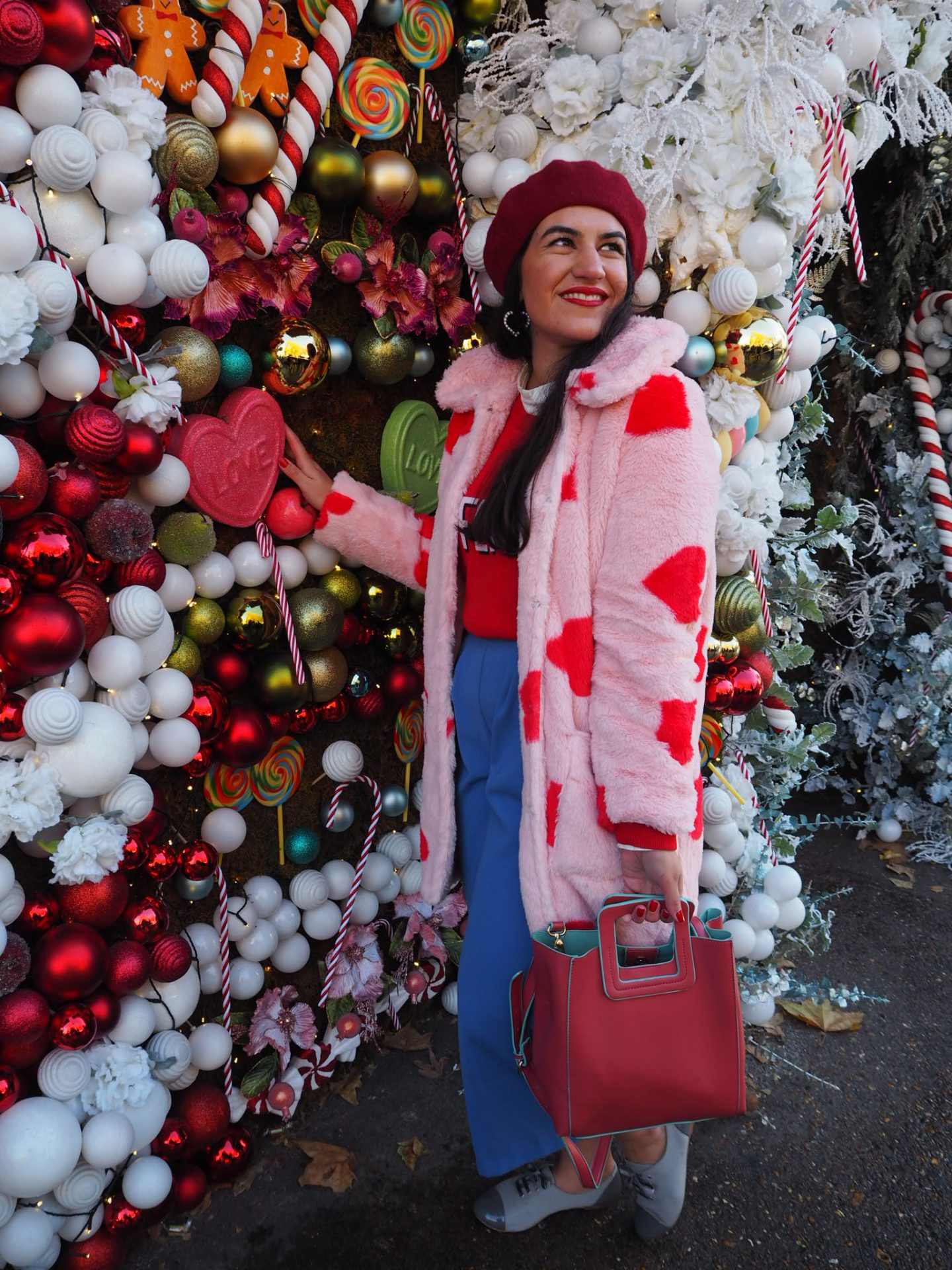 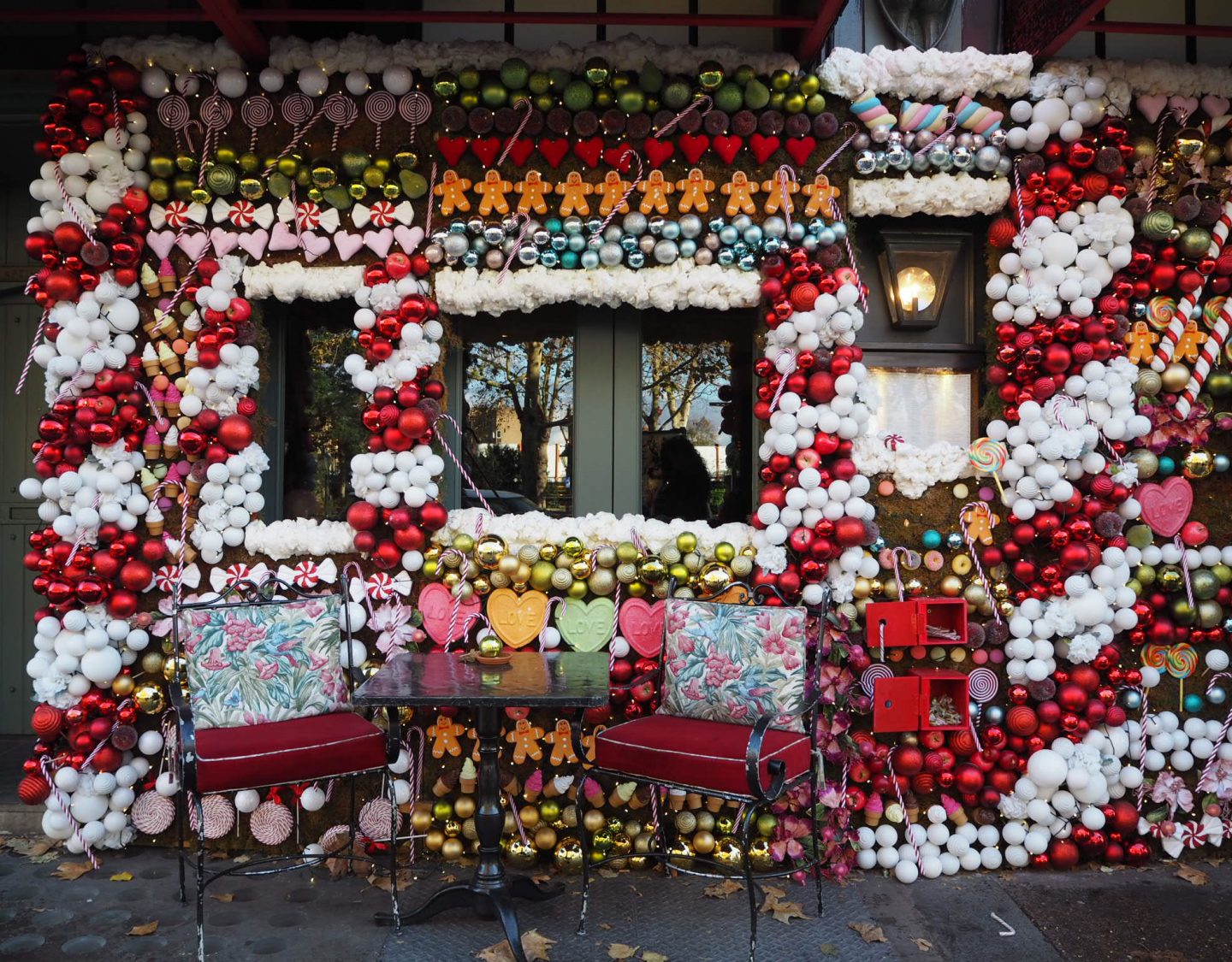 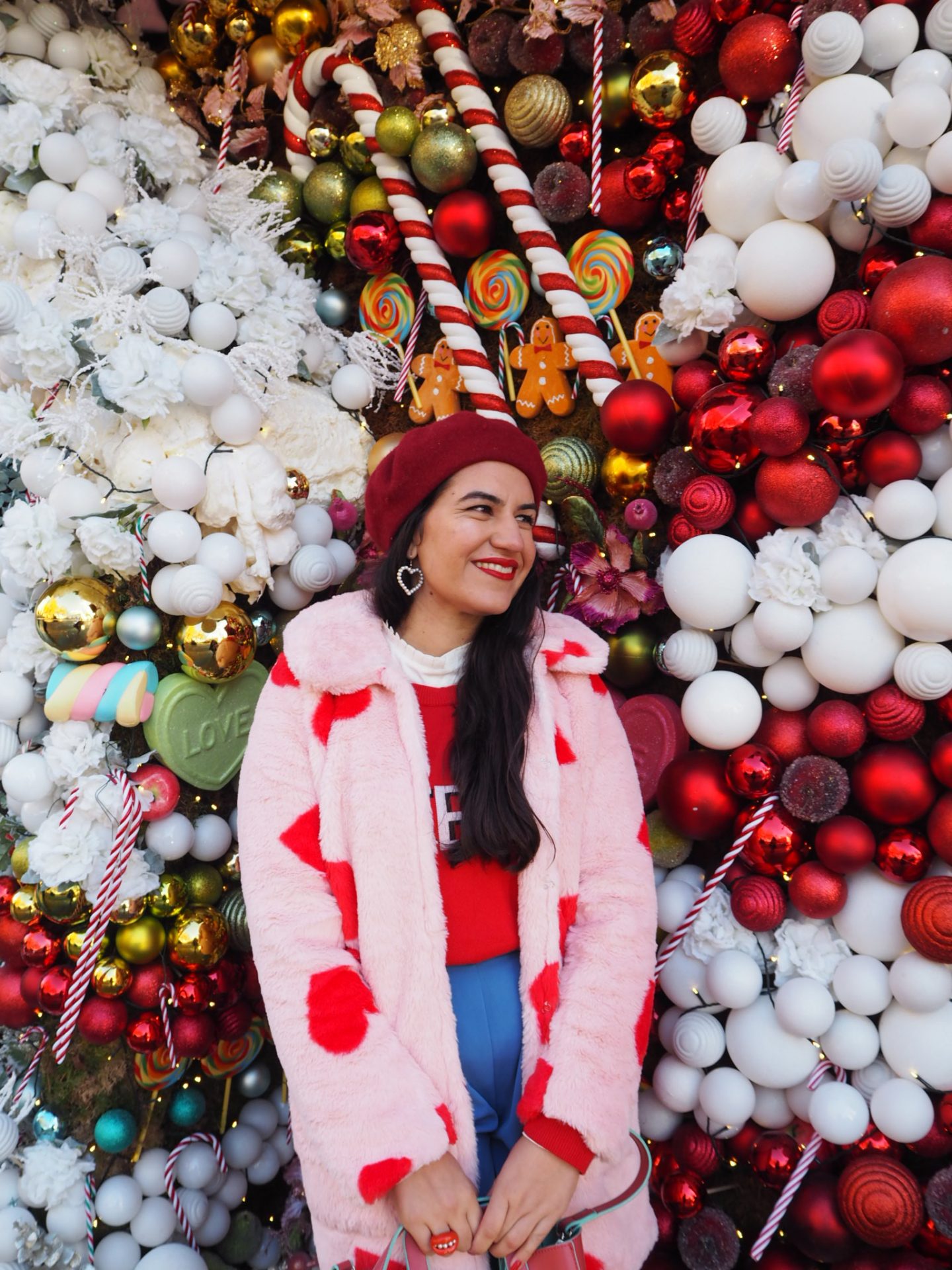 At first all I was going to do was simply write a love letter to this gingerbread house, but as well as touching on my #ootd, this morning I came up with the idea of making a little list of the best Christmas decorations in London. It’s fair to say this is by far the most spontaneous blog post I have ever done! So, if like me you love a good Christmas decoration (and love to photograph them too), here is my little list of places that dolly up for the festive season in London, making it a truly lovely city. 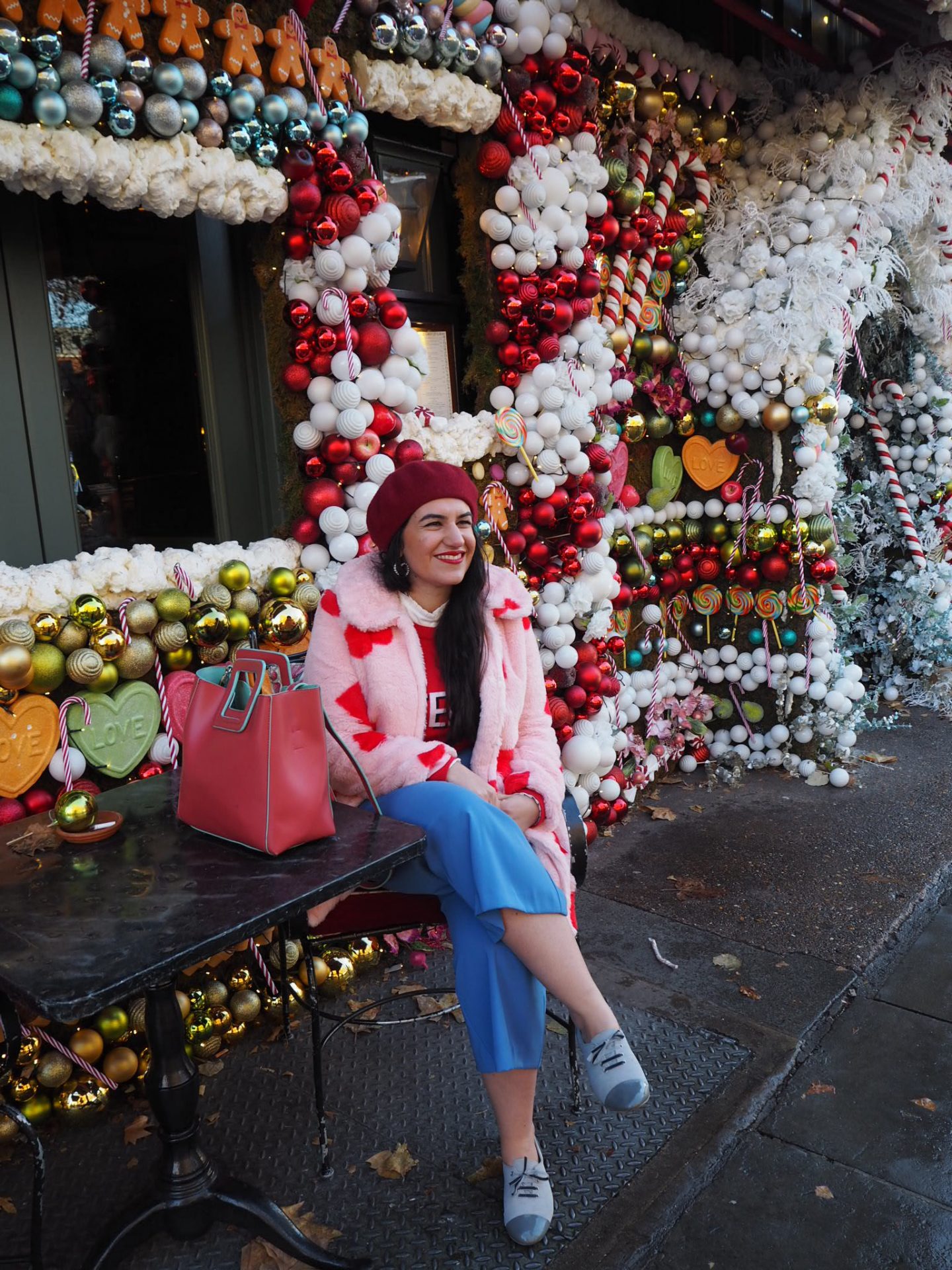 I’ve probably missed a bunch of spots but I think this is a pretty good start! Let me know if there are any more hidden gems and hey, I might as well end this post with a cheeky little plug to my Instagram (@stylewanderings), as I’m planning to post some Christmassy imagery on my feed over the next few weeks here and there – I suppose you could say I’m getting into the Christmas spirit, miracles do happen!

Pictures taken in front of the Ivy on Kings Road, Chelsea, London on November 19th, 2018.