It’s been over two months since my trip to New York but I still want to share a few of my memories, loves and findings from the Big Apple, in the hope to maybe inspire some of you – and food porn is one of my favourite ways to inspire!
Guys, I’m not going to sugarcoat it – I came back from New York feeling like I had to go on a lettuce-only diet for the rest of my life. Whilst everyone had banged on about how New York portions would be insane, I was actually fine with the portions – I just ended up eating way too many fatty foods. I’m not gonna lie though, it felt so wrong yet so right!
Unsurprisingly, food in New York seems to be pretty awesome – be it good and bad. We were on the go all the time so a lot of our food finds were spontaneous – others were indeed recommendations or places we’d heard of in the magical world of social media. Want to find out which was my favourite out of all these culinary treats? Read on to find out and hopefully get some trips if you have the pleasure of going to NY! 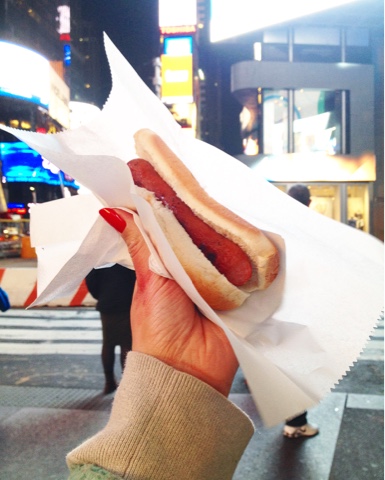 Hot dogs everywhere: You can’t go to New York without having a hot dog, right? This one in particular (bought and gobbled up in Times Square) wasn’t anything to write home about but it was yummy enough – funnily enough my love for hot dogs has come from London, in which I have had snobbier more elaborate doggy dishes. 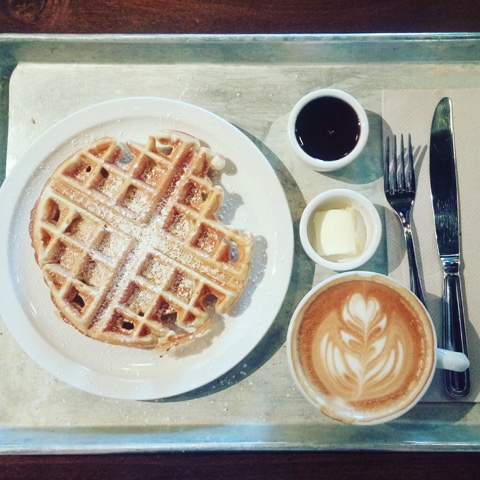 Gotham West Market: This beautiful breakfast was actually my friend Ruth’s choice, in a ridiculously trendy spot in Hell’s Kitchen. Gotham West Market is, in its own words, ‘a day & night market dining destination’, in which you get the chance to try all kinds of different foods – imagine Westfield’s food section being actually cool. 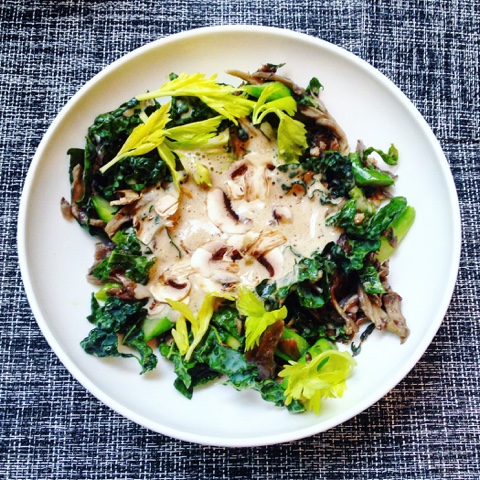 Terrace 5 at The MoMA: I’m always wary of museum cafes and restaurants (the food is never as good as the art), but I really enjoyed this meal at the MoMA’s Terrace 5 cafe, which if I remember correctly, was poached egg with sweetcorn, corn, faro, kale and mushroom sabayon. 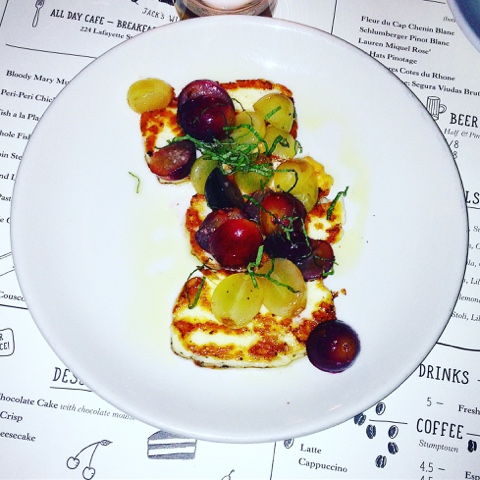 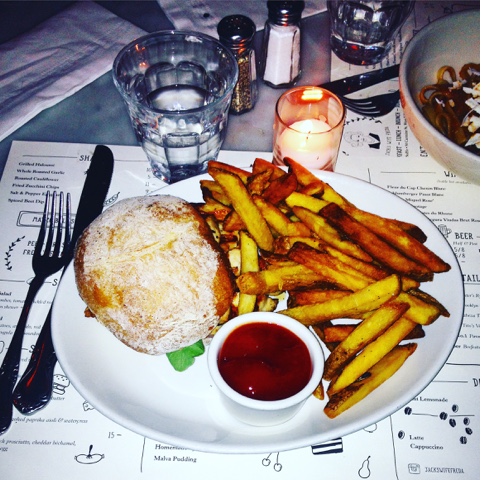 Jack’s Wife Freda: I discovered this place on Instagram and thought the food and vibe looked amazing, so my friend and I ended up at (I think) the Carmine Street branch for dinner. I had grilled haloumi with mint and grapes and ‘chicken prego’ – basically a glorified chicken breast burger with paprika aioli and watercress. It was delicious enough but we weren’t blown away either. Not that I would never go back, as their brunch looks divine. 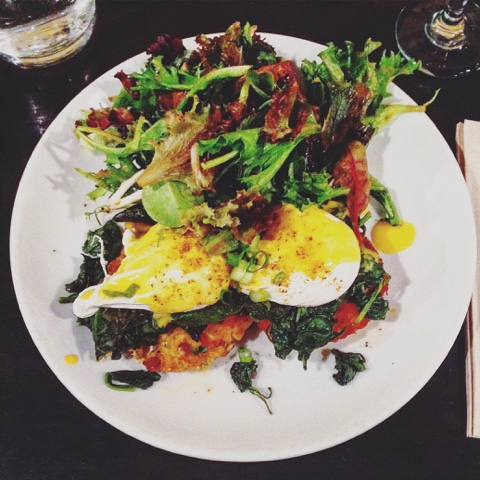 Friedman’s Restaurant: We stumbled across this company’s Chelsea Market location venue and absolutely loved it. It was relatively small yet cosy, with R&B in the background and super friendly staff and customers. Not to mention the delicious food – these poached eggs served with (I think) salmon cakes and tons of lettuce were amazing! 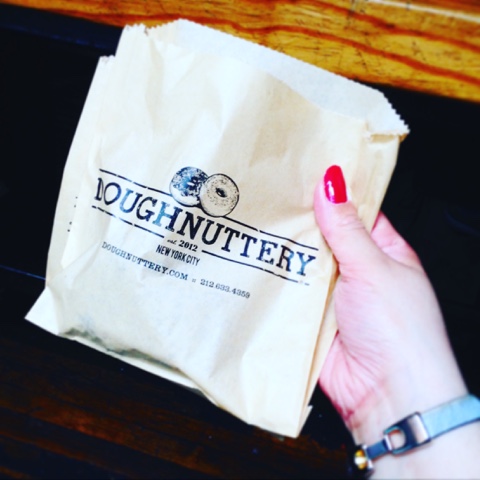 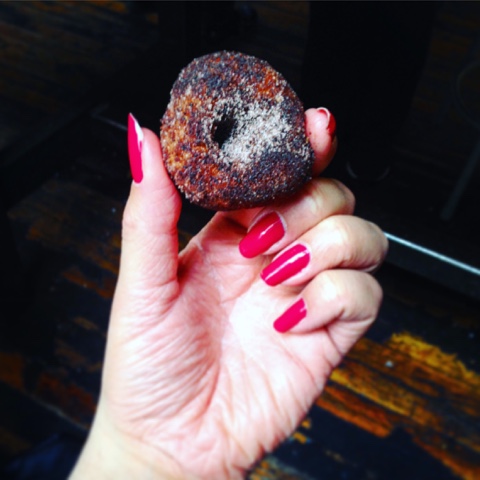 Doughnuttery: Also discovered in Chelsea Market, these super cute doughnuts were the bees’ knees. That’s all. 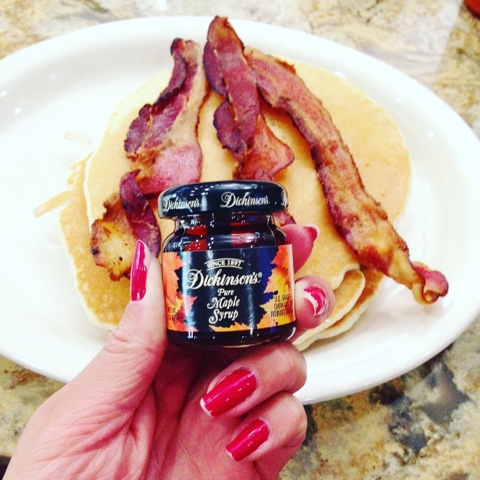 WestWay Diner/Random diner in Hell’s Kitchen: We were desperate to have a ‘real’ diner experience, which led us to cautiously enter an unglamorous, not really hip, not so-safe-looking and (best of all) completely unpretentious place in Hell’s Kitchen called WestWay Diner. It was, unsurprisingly, one of our most memorable eating out experiences in New York, and the bacon and pancakes I ordered were pretty damn good. The little jar of Maple Syrup helped of course. 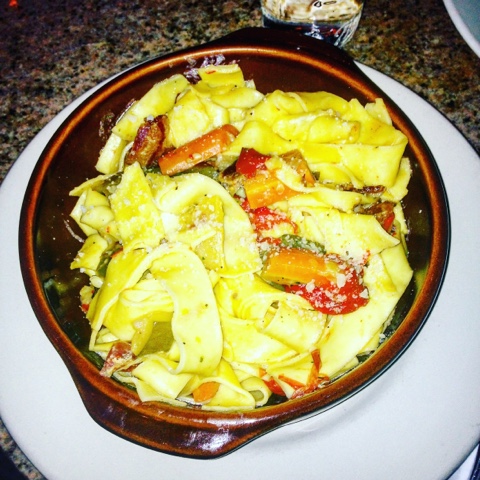 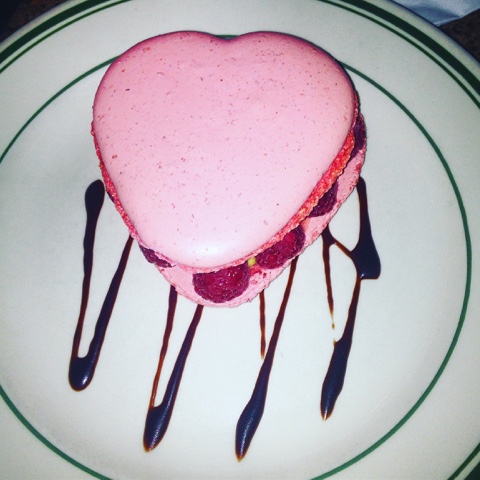 Mominette: Sort of French, sort of Mediterranean, and very cute is how I’ll remember this lovely venue not far off from Bushwick in Brooklyn – it had a beautifully relaxed atmosphere and we dined in its European-esque back garden. I had a good old pasta dish and one of our friends ordered this gigantic, heart-shaped macaroon, which of course had to be photographed. 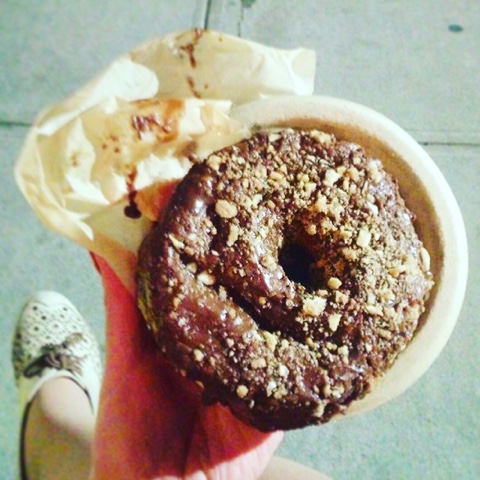 Big fat doughnut from possibly Dough: My friend and I were about to leave Brooklyn and stopped by this big(ish) cafe – I couldn’t resist treating myself to this gigantic chocolate doughnut, which I think was from the company Dough. 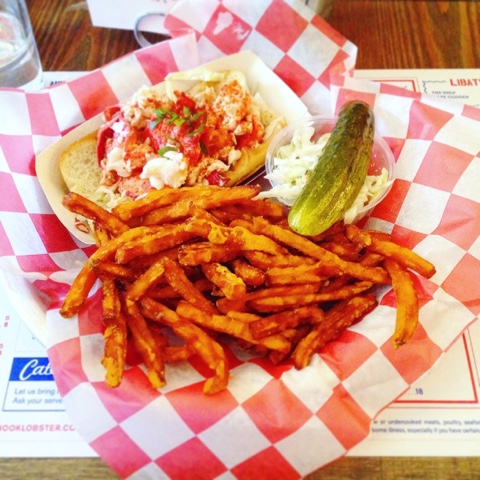 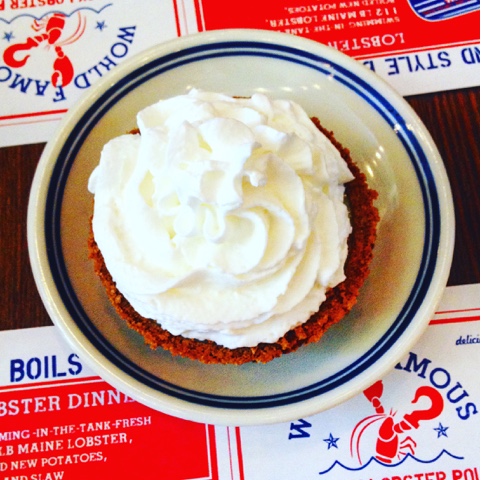 Red Hook Lobster Pound: Damn this place was fine! In a similar way to how I like a hot dog when it’s dolled up, I like lobster when it’s toned down. Our New York friends introduced to this too cool for school place (we went to the Brooklyn location), in which I had what I think was the restaurant’s Maine Lobster Roll and bit of dessert that I can’t remember what it consisted of exactly, soz! 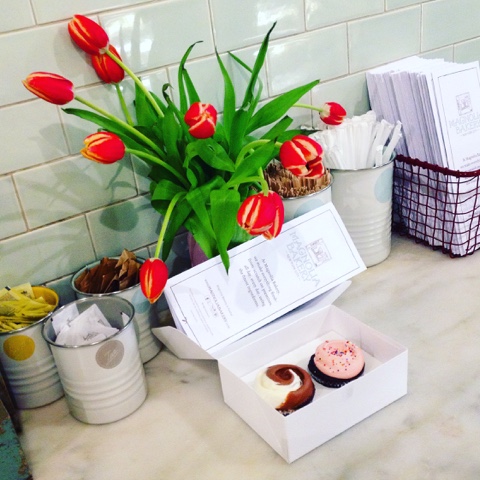 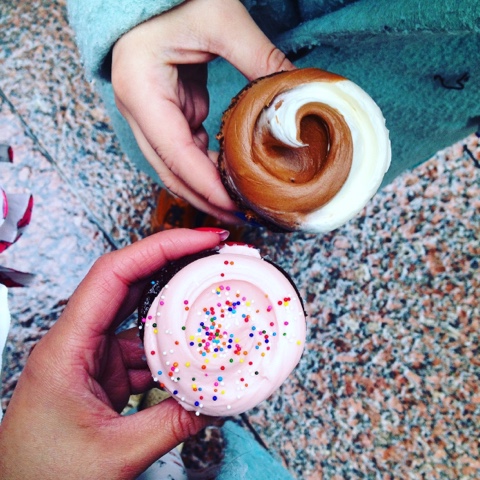 Magnolia Bakery: I know this is incredibly cheesy of me but yes, I’d dreamed about going to Magnolia Bakery for ages – and my main reference is not so much Sex And The City, but more the indie movie Naomi And Ely’s No Kiss List. So when I came across its Rockefeller Centre branch, I almost had a heart attack – and then treated myself to this divine beauty. 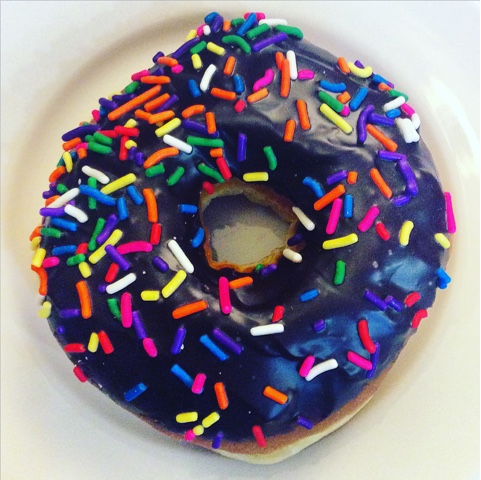 Viand Coffee Shop: Boy, did this diner-like coffee shop located on Madison Avenue feel authentic. I think it was opposite Bloomingdale’s or some other fancy shop – my friend and I needed a quick break and pick-me-up, which led to this delicious doughnut. 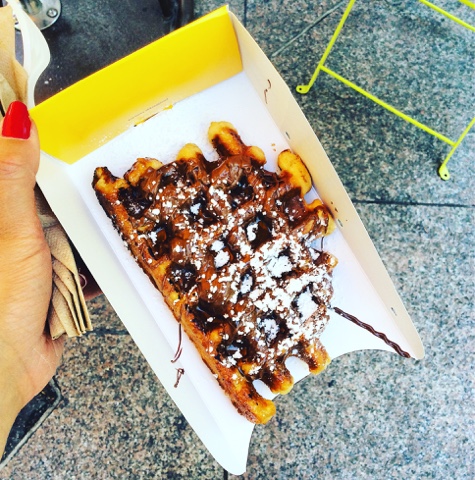 Yummy waffle truck (possibly Wafels And Dinges): This waffle truck was a recommendation – and it did not disappoint! 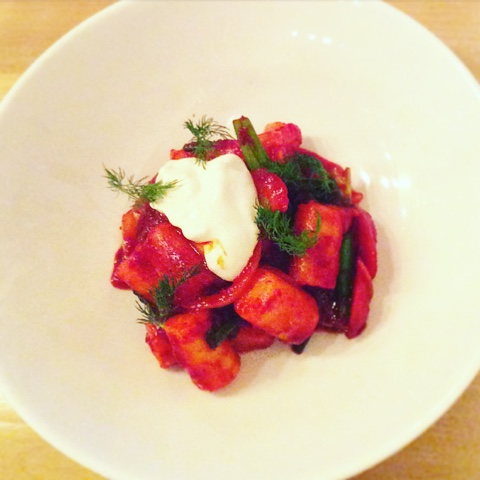 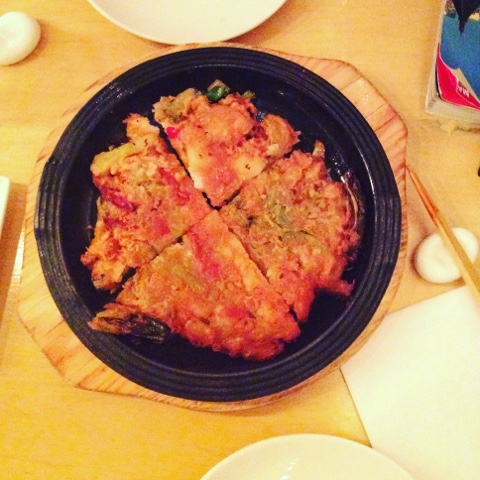 Korean restaurant off Times Square (possibly Danji): This is another place I wish I remembered the name of, as it was ridiculously charming and felt like a trendy restaurant you would find in London’s Soho. Nowadays everyone likes to fuse tapas with any kind of food – this restaurant was doing Korean tapas. To me, that just means expensive food in small portions – which it was, but it was also insanely delicious too. 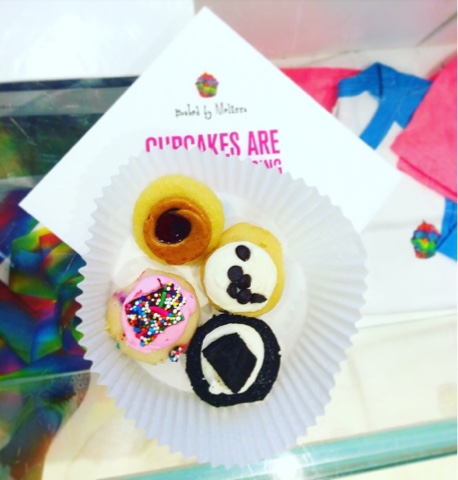 Baked by Melissa: You know I can’t resist a good cupcake, especially when they look this cute and make you feel slightly less guilty because they’re smaller (even though you end up having four instead of one). 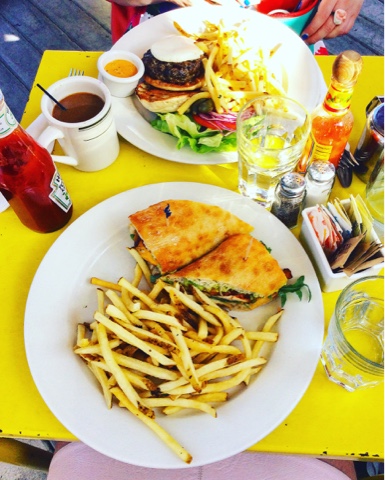 Juliette Restaurant: Located in the painfully trendy Williamsburg, being able to sit in its beautiful roof deck with the blazing sun in our faces was amazing, more so than the food. But no complaints about the food as such, it just wasn’t anything groundbreaking. Still, I’d say it’s worth going because it’s in a fab location, the ambiance is great and the venue itself is so nice. 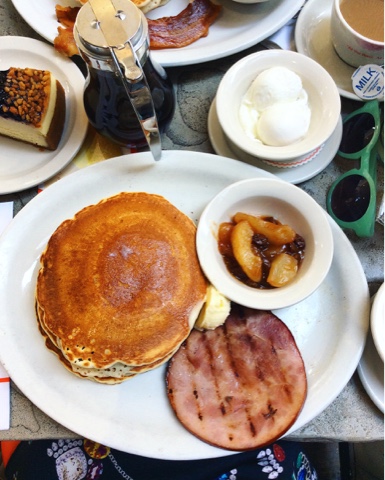 Junior’s: I banged on about this place in my first New York post, and I’m going to have to bang on about it again as I think it was my favourite meal in New York. Despite it being super touristy, super mainstream, super not hipster-friendly, the food don’t lie and these pancakes served together with Virginia Ham (you did good, Virginia) were mind-blowingly divine. If I ever go back to New York, I will definitely go back to Junior’s, which is also famous for its cheesecake. 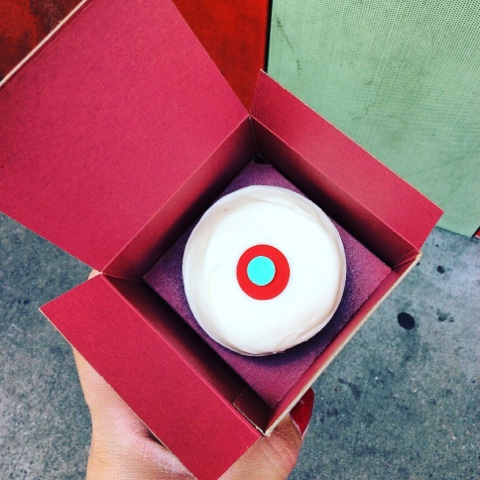 Sprinkle’s Cupcake ATM: This was another dream of mine – to take a cupcake out of an ATM machine. Those 30 seconds were one of the most blissful moments of my life – and the cupcake itself was pretty amazing too. So Sprinkles, please open up a branch in London – I’ll make sure it gets all the business it deserves.

Looking at all of these pictures makes me wonder how I didn’t come rolling back to England. It also makes me feel pretty disgusted at myself for having eaten so much amazing junk food. But overall, je ne regrette rien. I’ll remember New York for its arts, scenery and lovely people – but also for its pancakes, doughnuts and cupcakes.
So I hope that, if you’ve managed to put any form of judgement aside, you may have found this post fun and inspiring, as we did find a few yummy spots that any kind of foodie (unless your taste buds are on a similar level to Gordon Ramsay’s) would enjoy.

I am now off to eat (that’s what #foodporn infused posts make you do) something, which I promise you won’t be as indulgent as any of these meals.

Pictures taken by me and my friend Ruth between May 5th and May 12th 2016 in New York.