Guys, I’m not gonna lie: I love a bit of girl power (I once owned a Spice Girls folder stating these very words, after all). So when I heard that Saatchi Gallery would be hosting an exhibition focused on female street artists, my heart naturally skipped a beat. I then got myself on the VIP (??) list for the opening night faster than you can say female street art and was completely blown away when walking into that basement room four weeks ago. Women! Colour! Talent!
I went there about four weeks ago, exactly one day after coming back from Greece – it doesn’t feel like so long ago! Also I’ve got good news – this exhibition is on until this Sunday (March 6th), so if you want to get to know a bit more about all the amazing women artists that are out there, don’t miss “XX: A Moment In Time.”
There were SO many amazing pieces that if there hadn’t been so many people, I probably would have ended up photographing everything. Here’s a recap of just some of the artists exhibiting (yes, there were more, it’s so worth seeing!)… 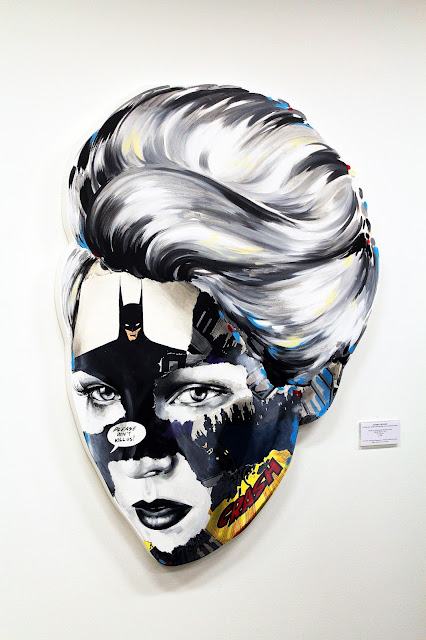 Sandra Chevrier: Based in Montreal, Quebec, Canada, Sandra is the author of this amazing piece (for me one of the most memorable of the show), poetically titled La Cage se Laissant Absorber par une Nuit Réconfortante. 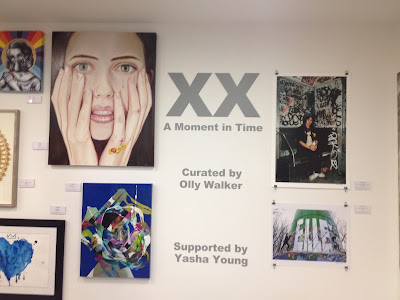 Crajes: I almost flipped when I saw these two gorgeous women by the Spanish (yay!) duo (Carla Rendon and Jessica Ruiz), they’re so painstakingly painted yet have a beautiful, illustrative quality about them. 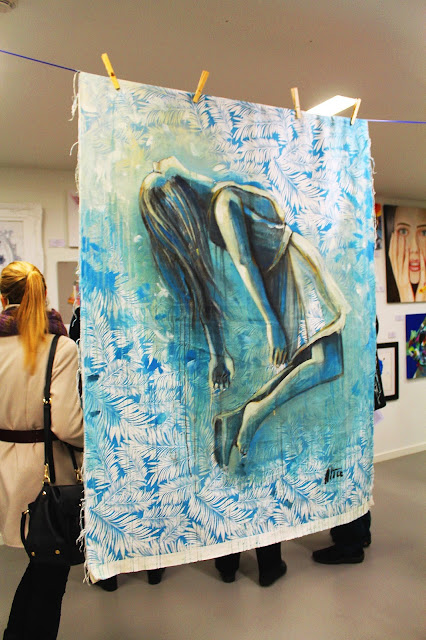 Alice Pasquini: The wonderful Alice! No, I’m not pretending to have met her – but the two only pieces of hers that I have ever seen in London (one of them shown here) are enough to make me a big fan of this Italian artist, who’s been making walls beautiful art since the nineties.

Hueman: An American artist who is clearly a master in the use of strong colours, Hueman has a beautifully distinctive fragmented style, that reminds me ever so slightly of Mr. Cenz.

Vexta: There’s not much I can say about Vexta’s work other than I love it! She is a self-taught (!) Australian street artist from Sydney, currently based in Brooklyn, New York.

Hera: So the interesting thing about German artist Hera (or Jasmin Siddiqui) is that a few years ago she teamed up with a male artist called Akut – together they formed Herakut, which may be what she is more known for. This piece is credited just as Hera – so I’m guessing she went solo for this female-focused exhibition? Either way, I absolutely love this piece – it’s got that perfect mix of innocence and perversity.

Olek: Born and raised in Silesia, Poland, Agata Oleksiak is now based in Brooklyn and creates crazy/amazing crochet artworks – her two text pieces remind me of Tracey Emin, who like Olek, focuses on women’s socio-political issues.

Miss Van: Originally from Toulouse, France, Vanessa Alice – who I obviously automatically like because we share a name – has a ridiculously distinctive style that is dreamy yet haunting. Before this exhibition I recognised her work but wasn’t aware of her name – a few days ago I actually saw one of her pieces in Brick Lane, sadly a little old and damaged. 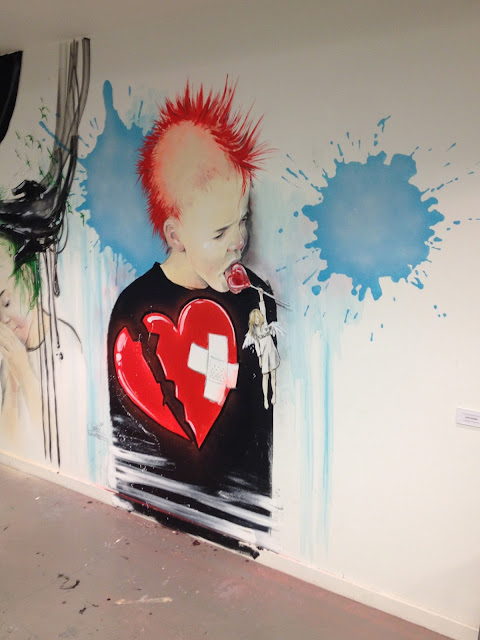 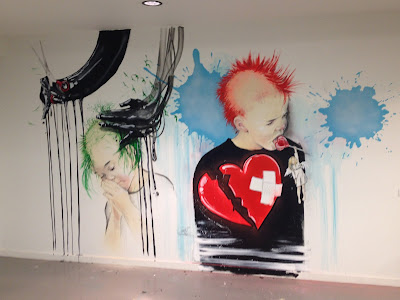 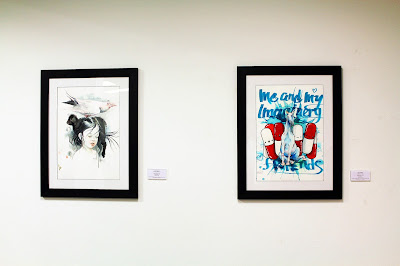 Lora Zombie: Wow. That’s all I have to say about Lora Zombie. That, and that she was born in a small town in Russia in 1990 (she’s so young!) and is self-taught. Amazing, right? If all that weren’t enough, she has an enviable sense of style too.

Aiko: As you may be able to tell by her first name, Aiko (or Lady Aiko) is a Japanese artist from Tokyo who’s developed an amazing career in New York, from working with Murakami to collaborating with Banksy. I loved this painting by hers, it’s got a very retro, almost deja vu vibe. 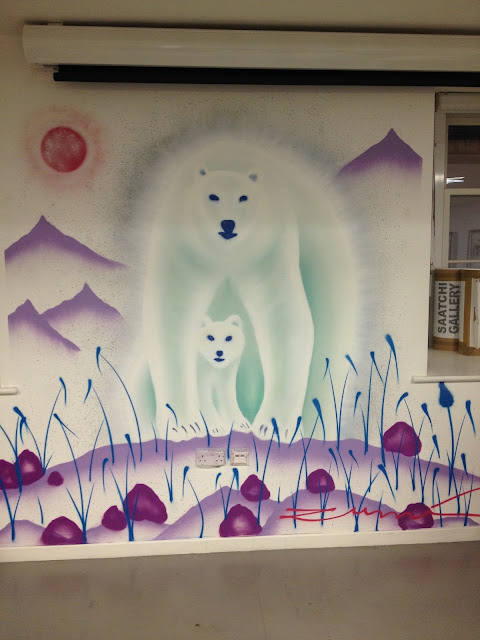 Marina Zumi: Isn’t this absolutely adorable? Argentinian-born, Brazilian-based artist Marina is a master at painting animals in the dreamiest of ways…

Isn’t this wall amazing? It’s my dream to have a wall like this in my own home.

Handiedan: This Dutch artist plays up classic pin-up imagery using various forms of mixed media in the most striking of ways. 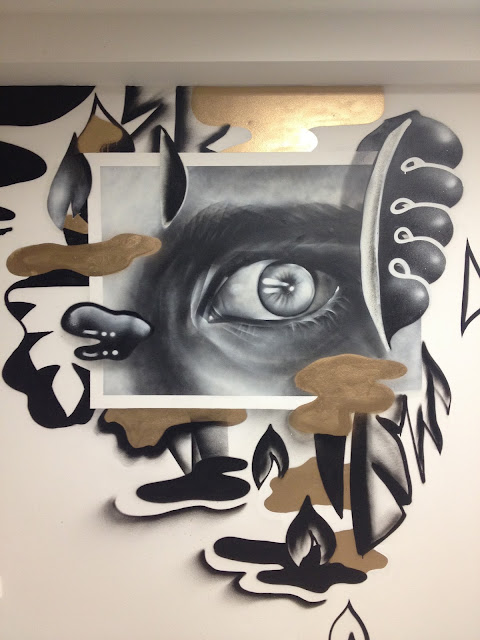 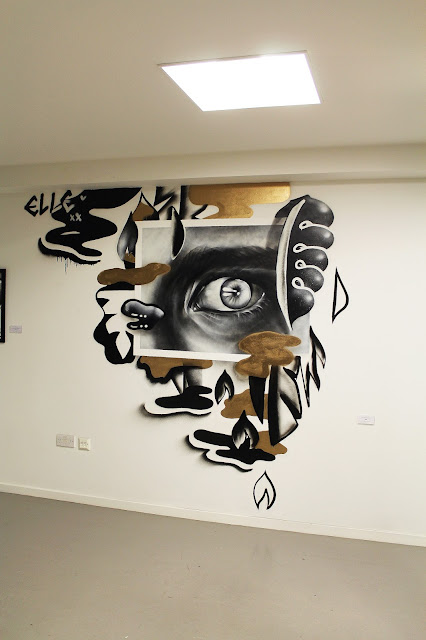 Elle: Damn – isn’t Elle just pure coolness? I love the intensity of those eyes. I hadn’t heard of Elle before – she’s an artist based in Brooklyn whose work is incredibly versatile and varied.

Caratoes: I couldn’t find much about Cara online, other that she’s originally from Belgium but is now based in Hong Kong. This painting is unsurprisingly very representative of her style – lots of black and white mixed in with wishfulness and intensity.

Zabou: This was my second time seeing Zabou’s amazing work (whose work has done wonders for my blog, as seen here and here) in a gallery instead of the streets of London (my first time was at Lollipop gallery). I don’t think it’ll be the last!

FYI, a lot of these pieces (originals and prints) are available on Saatchi’s website, so if you love art and have a couple of thousands of pounds to spare, you know where to shop…

Just like what happened to me when discovering street art in Greece, this exhibition made me realise that I still have so, so much to learn about street art. Saatchi Gallery is very much in sync with current trends and what is happening on the streets, so when such a prestigious (and in many ways hip, especially after hosting London Fashion Week) institution hosts an exhibition with lots of the pieces directly painted onto the walls, it’s a sign of something.

I hadn’t heard about most of these artists and I left feeling inspired not just because women kick ass but also because “XX” proved that street art is on the rise – well, it’s taking over. It’s almost as if nowadays in order for an artist to refer to themselves as an artist they must include street art in their resume. It’s crazy to think about the shift that is happening in art – is street art  about to become to a higher form of art than art in the traditional sense? Peeps, stay tuned on this.

If any of you lovely peeps live in London, I cannot recommend this exhibition enough. It’s only on for another six days, so run along and experience this art revolution on a first hand basis.

All photographs taken by me on February 4th, 2016 at Saatchi Gallery, London.