It’s been a long time since I’ve truly paid attention to what happens at awards like the Golden Globes and the Oscars, as I’m a bit of a film snob and find these celebrations way too ‘mainstream’. But what I’m definitely not is a fashion snob – so who cares about all the Hollywood back-padding and prizes when we’ve got all the pretty dresses to look at, right (Please note I’m being partially ironic/sarcastic)?! I’ve always enjoyed reading up on the fashion highs (and no, not lows) at award ceremonies, so I thought that, after blogging about fashion for six years, shouldn’t I give it a go myself?

I’ve picked my personal 10 winners and 10 runner-ups of this year’s Golden Globes Awards. And because there really is so much hate out there I haven’t done ‘worst dressed’ or least favourites – all I’ll say is that I do feel like, overall, it wasn’t wow enough. I understand that nowadays, more than ever, there is a HUGE amount of pressure for actresses to look great all the time, which is so unfair. But I also think that if there’s one event when celebs should go all out, it’s at awards ceremonies. What happened to the days when people like Björk would wear a swan dress and lay an egg? Where the heck was Lupita Nyong’o when you need her? Even Lady Gaga played it safe…

But not to worry, there was plenty of glitz, glamour and prettiness to be spotted. Bare in mind this is a very personal viewpoint, so here are my particular favourites!

Ladies in red (From left to right: Jennifer Lawrence in Dior, Zendaya in Marchesa, Emmy Rossum in Armani Privé)

Red for the red carpet – predictable? Nah – I think red dresses are always a good idea. I quite like the cut-out detailing in actress/winner Jennifer Lawrence’s dress, and the overall styling (androgynous hair, bold Chopard necklace) is quite bold. I love the gorgeous simplicity of actress Emmy Rossum’s look – the dress is simple but fits her perfectly, whilst the stunning necklace adds some edge and her hair is screen siren perfection. It’s a pretty flawless look. Brownie points go to singer/actress/teen idol Zendaya for choosing such a dramatic dress that’s, as Cosmopolitan pointed out, reminiscent of one of my favourite emojis – the flamenco lady.

I feel like there’s never enough print on the red carpet. I can imagine actress Rachel McAdams might have got backlash for this dress, but at least it’s different and charming. I also kind of love the uniqueness of actress Jaimie Alexander’s statement Genny dress – that is one hell of a print, and not many people could pull it off.

There was a lot of white, cream, off-grey and overall very neutral shading at this year’s Golden Globes. Personally I prefer shots of colour – but white can look incredibly elegant, of course. I wasn’t a big fan of Swedish (Yes, I’m still shocked about that) actress/nominee Alicia Vikander’s Louis Vuitton’s dress at the front – but without a doubt, she gets best twirl of the night. Also, it’s Supergirl!! I thought Melissa Benoist looked lovely in her floral white dress. Kudos to her perfectly picked accessories and Cali surfer girl hair – I’m not gonna lie, I may be bit partial to Melissa as she’s the star of one of my new TV guilty pleasures.

The blue gowns that I spotted at the Golden Globes were all pretty fierce, don’t you think? Actress Bryce Dallas Howard – who should have won a Golden Globe for making all of us believe that it’s possible to run in sky-high heels while being chased by dinosaurs – pumped up the glam factor with her sparkly choice. I didn’t know who Barbara Meier was until I saw her in this dress – I like the fact that she went so big (and a Bottega Venetta clutch is always a good idea). I have a soft spot for Gina Rodriguez, as she’s Jane The Virgin, and think she looked pretty lovely in this princess-like navy dress (even though it kinda looks a bit too long for her?!).

I know one could argue that this dress is very simple, maybe even too simple for an awards ceremony, but I love it because it’s classic Roland Mouret, who designs the most flattering dresses for women. The Hateful Eight star and nominee Jennifer Jason Leigh doesn’t really do the whole glitz and glamour thing, so I think this pretty dress is perfect for a woman with an amazing body who isn’t interested in stealing the show on the red carpet. It’s a perfectly understated look – plus the puffy sleeves and nipped-in waist are awesome.

Like I said, it’s awards season so one might as well go all out – actress Jenna Dewan Tatum did just that, and killed it.

I would have preferred to stick to just actresses but what can I say, reality TV star Olivia Palermo knows how to dress. This is one of my absolutely favourite looks because it’s so different to what people normally do on the red carpet. The elegant graphic print, the shorter length… I love a risk-taker when I see one and Palermo pulled this look perfectly. Plus it’s by a Spanish brand that I’ve known all my life, so extra brownie points for that.

Now that’s one hell of a Keira Knightley deja vu there, don’t you think? Keira has always been one of my red carpet-style favourites and if the Cinderella star takes her lead, I’m all for it. Lily looked sultry in this beautiful dress by one of my favourite brands, Marchesa. Lets face it – you just can’t go wrong with a Marchesa dress on the red carpet.

Oh J.Lo, you could wear a potato sack and I would probably still include you in a list of best dressed – mainly because I’ve been a fan of your awesome music and maybe not so awesome films for almost 20 years. In all seriousness though, I think she looked pretty beautiful in this dress. I love the colour and little cape, as well as that it’s not just Angelina who owns the side leg posture. 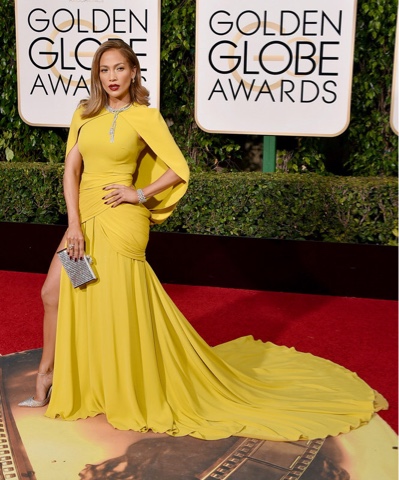 As far as I’m aware Telenovela star Eva never has a bad day on the red carpet, right? I love this beautiful dress by Georges Hobeika – it’s super simple, but so damn pretty thanks to those flowers and bow cut-out. I hope to see more of this designer’s creations on the red carpet.

Irish gal and star of so many movies in 2015 Saoirse (watch a video here on how to pronounce her name) seems to be a pretty down to earth girl who doesn’t believe in too much Hollywood fuss, and that came across with her stunning choice of outfit. It’s simple but oh so pretty and goddess-like – I do love a Greek Goddess inspired dress…

I’ve never taken much notice of Amy Adams’ style – but more importantly, she’s one hella’ good actress. For some reason, I am obsessed with her dress from the Golden Globes this year. It’s so simple but so perfect, and I can’t quite put my finger on why! I love the colour on Amy, and I don’t think this dress would look this amazing on anyone else. Maybe that’s what I love about it – this dress was made for her, and she owned it.

This dress sums up what red carpet dressing is all about. An eye-catching and stunning colour that suits the actress, a beautifully simple fit with a super flattering neckline, a bit of cape-like action, bare back and side split. It may be safe, but it’s pretty close to perfection.

Yep, the sexy actress and lucky Mrs. Depp gets my vote. I love the blush pink/red shade, I love the pleats, I love the flowers. Plus there’s a little bit of back action too. Her hair and makeup suits the dress all too well (I mean, was that lipstick made for the dress?) and Amber pulls it all off with a quietly seductive confidence. I know a lot of people won’t agree but I’m simply in love with this dress and look.

So there you have it – if you’ve lasted this long through my Golden Globe musings congrats! I never realised how much fun it would be to write up a post like this, I should do it more often. It was interesting to spot a few ‘trends’ on the red carpet, such as capes – clearly, not just for superheroes anymore – an overload of glittery Jimmy Choo’s and the extensive use of clutches. I swear a few years ago celebs just didn’t use clutches on the red carpet – I mean, surely they carry keys and phones like the rest of us mortals? I think clutches are a must – they’re not only practical but if chosen correctly add a nice little touch to any party look.

What were your favourite looks from the Golden Globes’ 73rd ceremony? And by the way, what do you think of the choice of the actual winners? Because that matters too (to some degree)…