I have to admit, my one-week stay in Malaga last month already feels like a lifetime ago, even if it was barely three weeks ago. I blame this feeling on the fact that even though it was Christmas, it felt like a mild spring.

For someone who is usually very unorganised, I think I did a good job this time with my packing. I probably packed too much, but it worked. 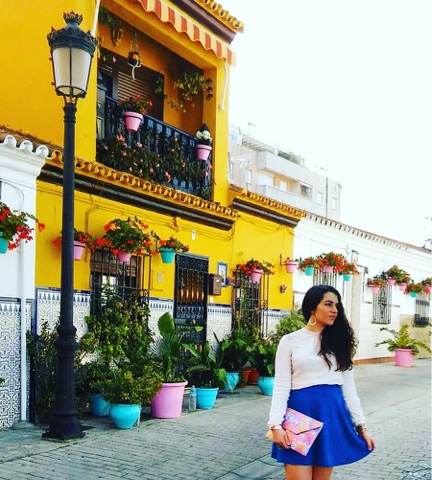 I included this photograph because I am madly in love with the streets of Estepona – and how cheerful is that wonderfully Southern Spanish house? It sums up my holiday and vision of Andalusia.

This pink top was a gift from the lovely peeps I worked with over the summer. I’m a bit annoyed with myself because I hadn’t ruined anything in the wash for a long time – but I took a risk with this top and I’m pretty sure it’s shrunk a little, as I don’t think I put on a huge amount of weight from October to December…

I still love it to bits though. I feel like my style’s got quirkier and quirkier over the years, so this top is like what I would have bought four or five years ago. But that’s not to say I don’t approve! 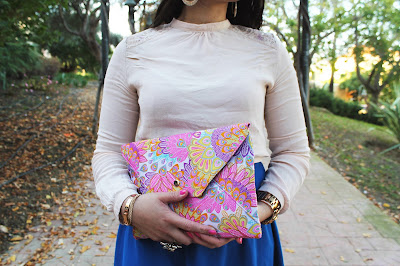 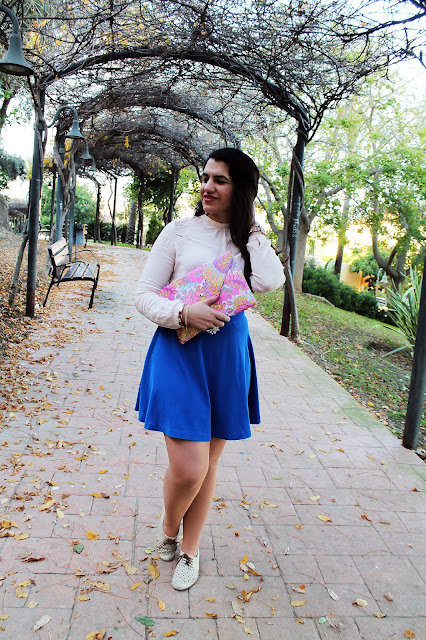 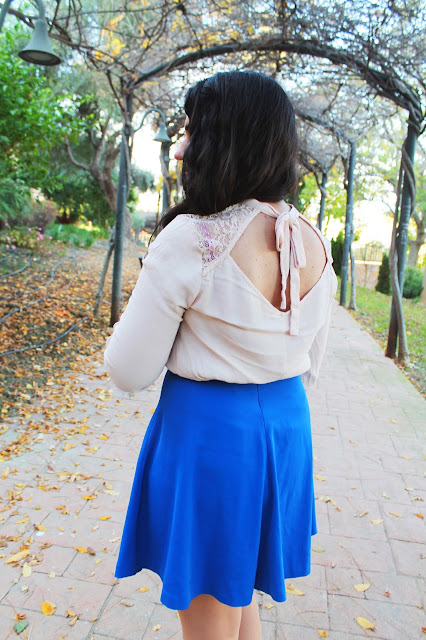 There’s something a little vintage/retro about this top… I’d like to think it’s more Victorian than seventies, which I know is so in now. Can it be called a Victoriana blouse? The tiny high neckline is very elegant and my favourite details are the lace panels on the shoulders and the cut-out back. It’s a simple and chic top – which I definitely need more of in my wardrobe, considering all the craziness that can be found in there! 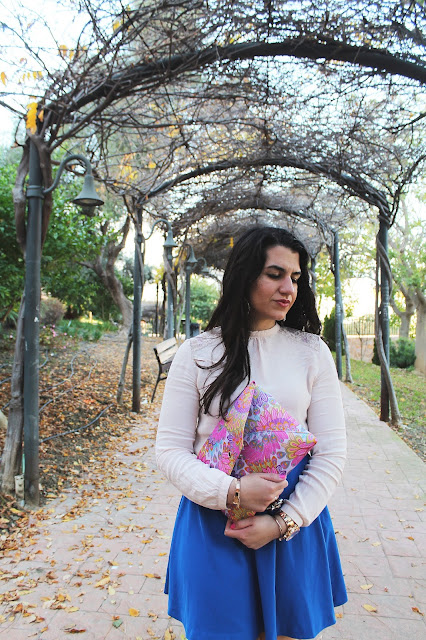 It’s by the French brand Charlise, which I’m getting more and more into as it’s so pretty and feminine. They don’t have an online shop as I think they’re still very much a new brand – but my top and a few other pieces are available to buy here. 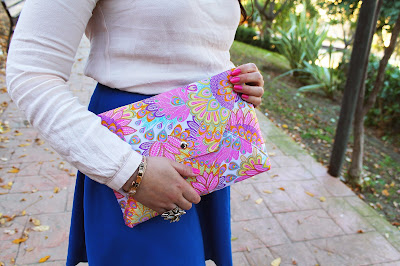 This super jazzy clutch was included as a gift with Spanish magazine Woman‘s December issue. As someone who’s passion for fashion was born in Spain, I can confidently say that Spanish magazines give out the best gifts! I found out about this offer on Instagram and my mother kindly obliged to be my personal shopper & Secret Santa in Spain – this clutch and its dogtooth brother were as a result Christmas presents. 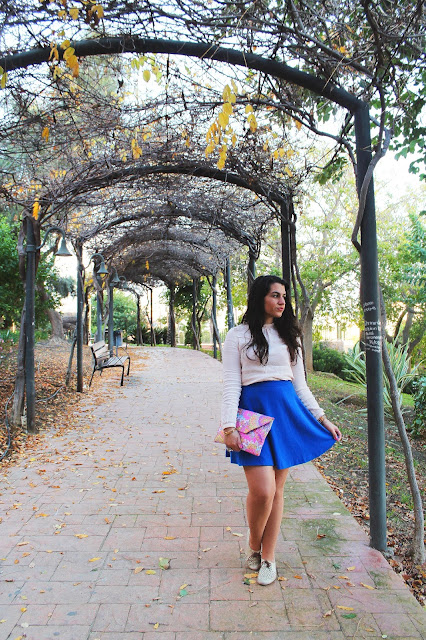 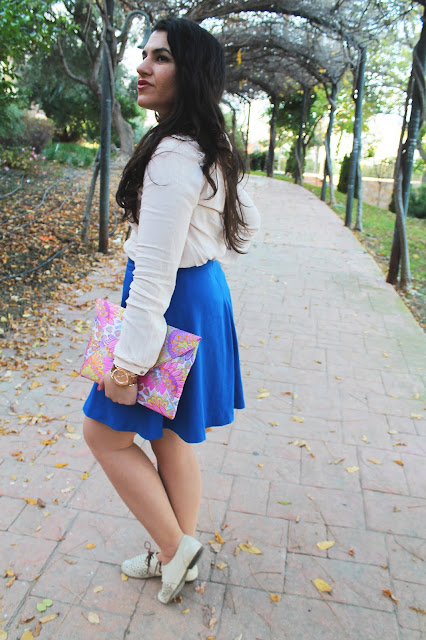 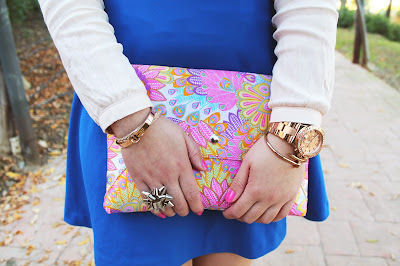 I’ve been meaning to talk about my new jewellery bits and bobs, as at the end of last year I became a born-again jewellery magpie! I discovered a lovely Australian brand called The Peach Box from which I got my belt and nail bracelets. I love these two bracelets to bits and have been wearing them non-stop. 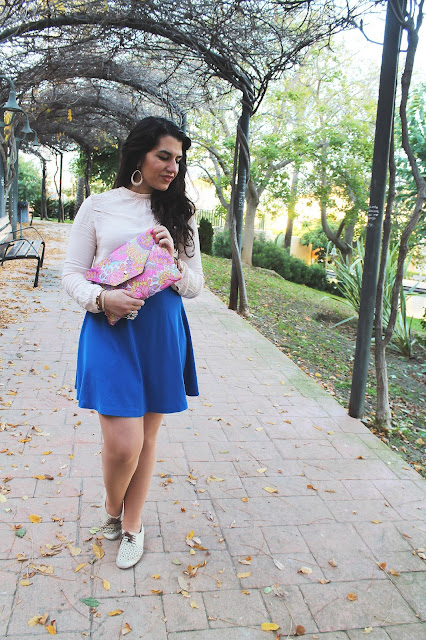 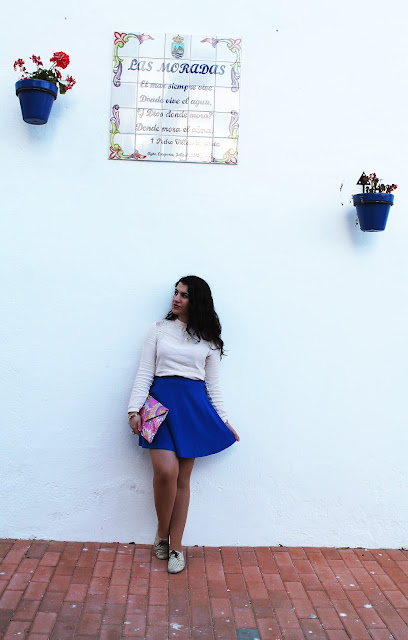 I had to include this picture just because of the pretty poem tiled on the wall! It says: El Mar Siempre Vive, Donde Vive El Agua. Y Dios Donde Vive? Donde Mora El Alma. Which means, The Sea Always Lives, Where The Water Lives. And Where Does God Live? Where The Soul Wanders. Spain is, after all, a historically very Catholic country, especially in the South!

Pictures taken by my mum on December 20th, 2015 in Estepona, Malaga, Spain.