Like I said, there I’ve been feeling really blue lately, as seen here and here, and this top is the cherry on top of the pie. You know that feeling when you pick something up in a shop and can’t put it back? Well that’s just what happened when I came across it in the sale section last month whilst casually browsing in River Island. 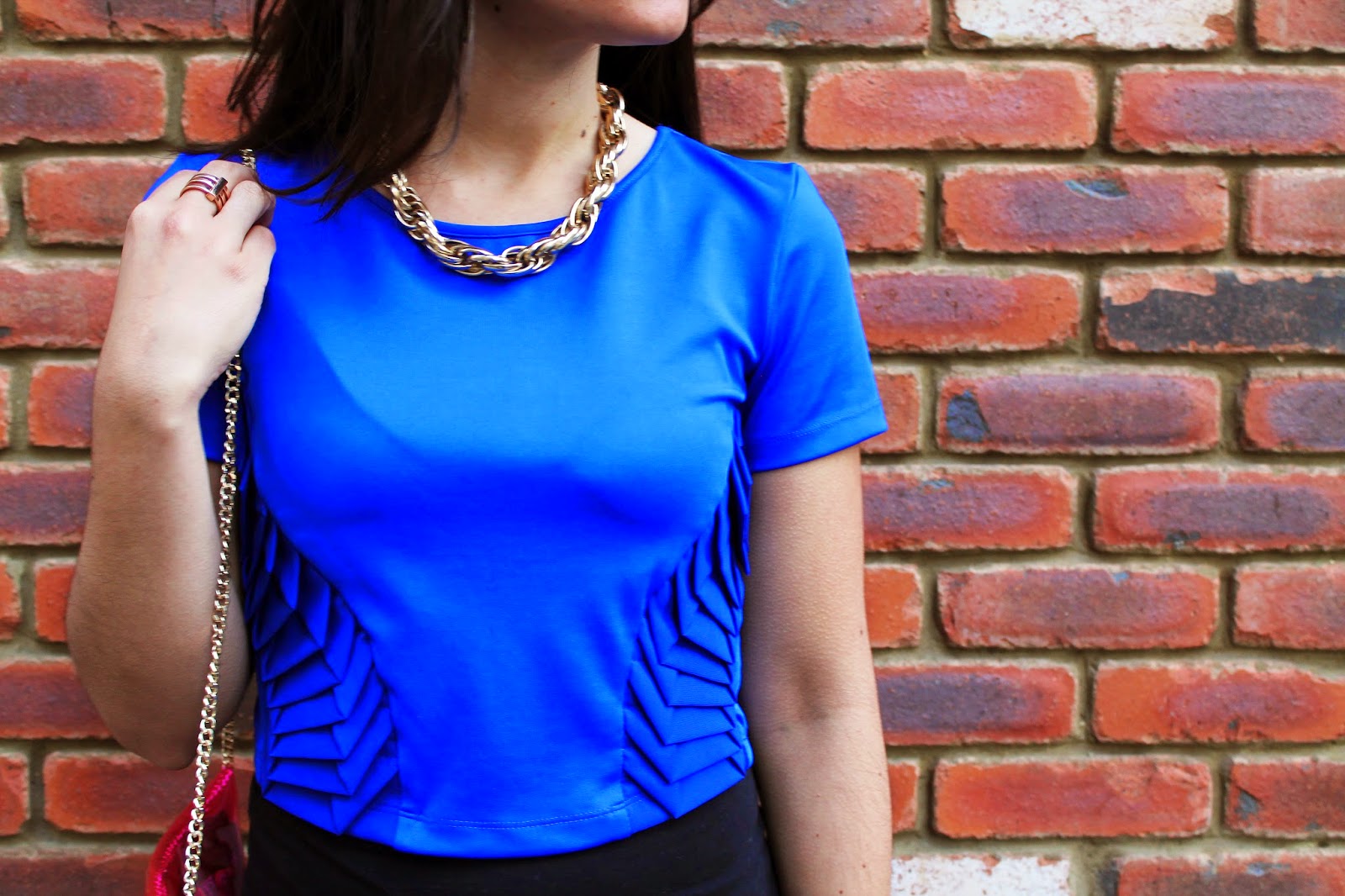 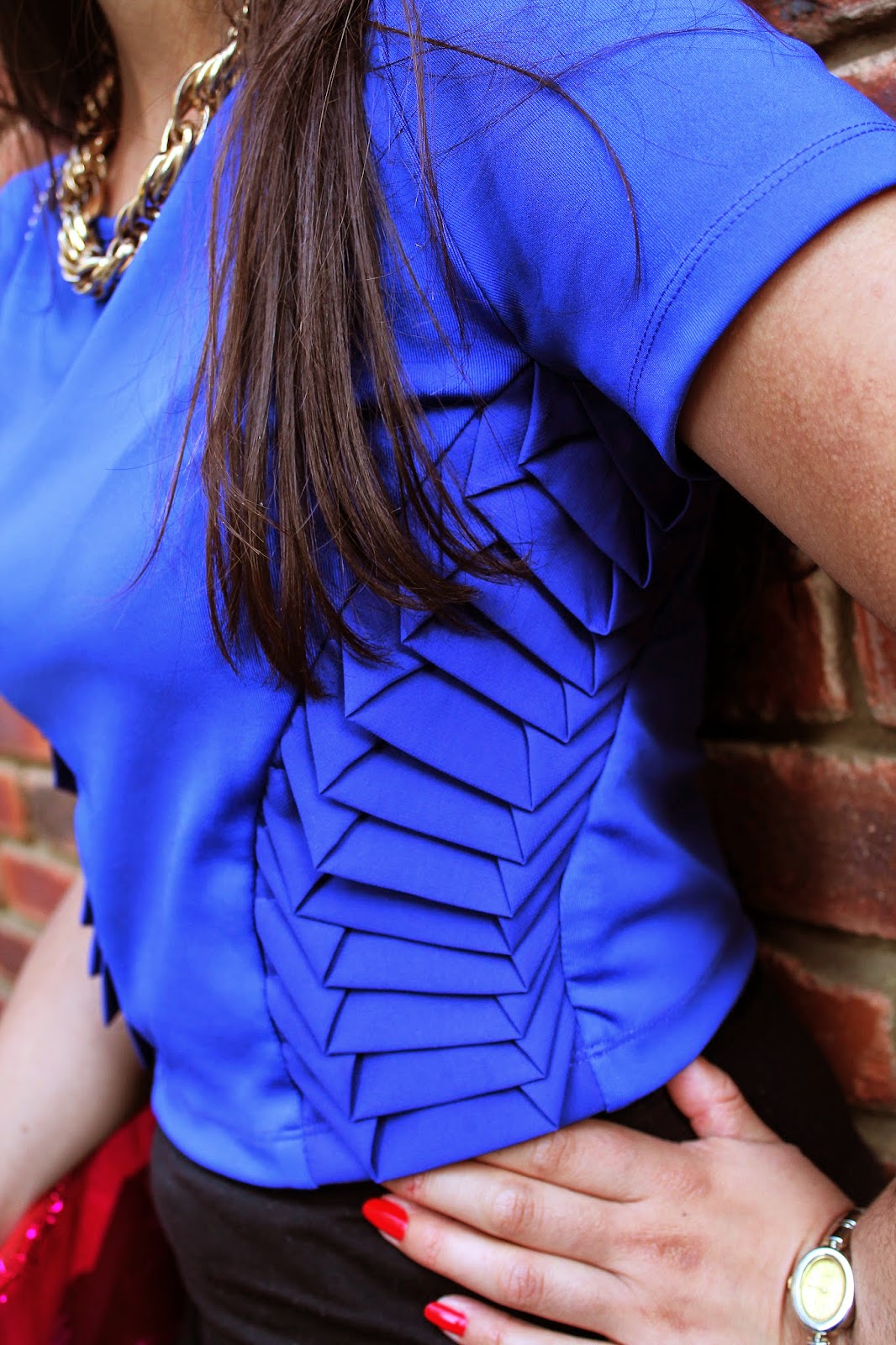 It ticked one major box by being a beautiful and intense shade of cobalt blue. And the rib detailing on the side – oh my, how luxurious for a high-street brand. It did have a major drawback too – the slightly cropped style. Normally that’s a no go for me, and not just because I’ve got flabs instead of abs. But when I tried it on every ounce of doubt was gone and that was it, it had to come home with me. 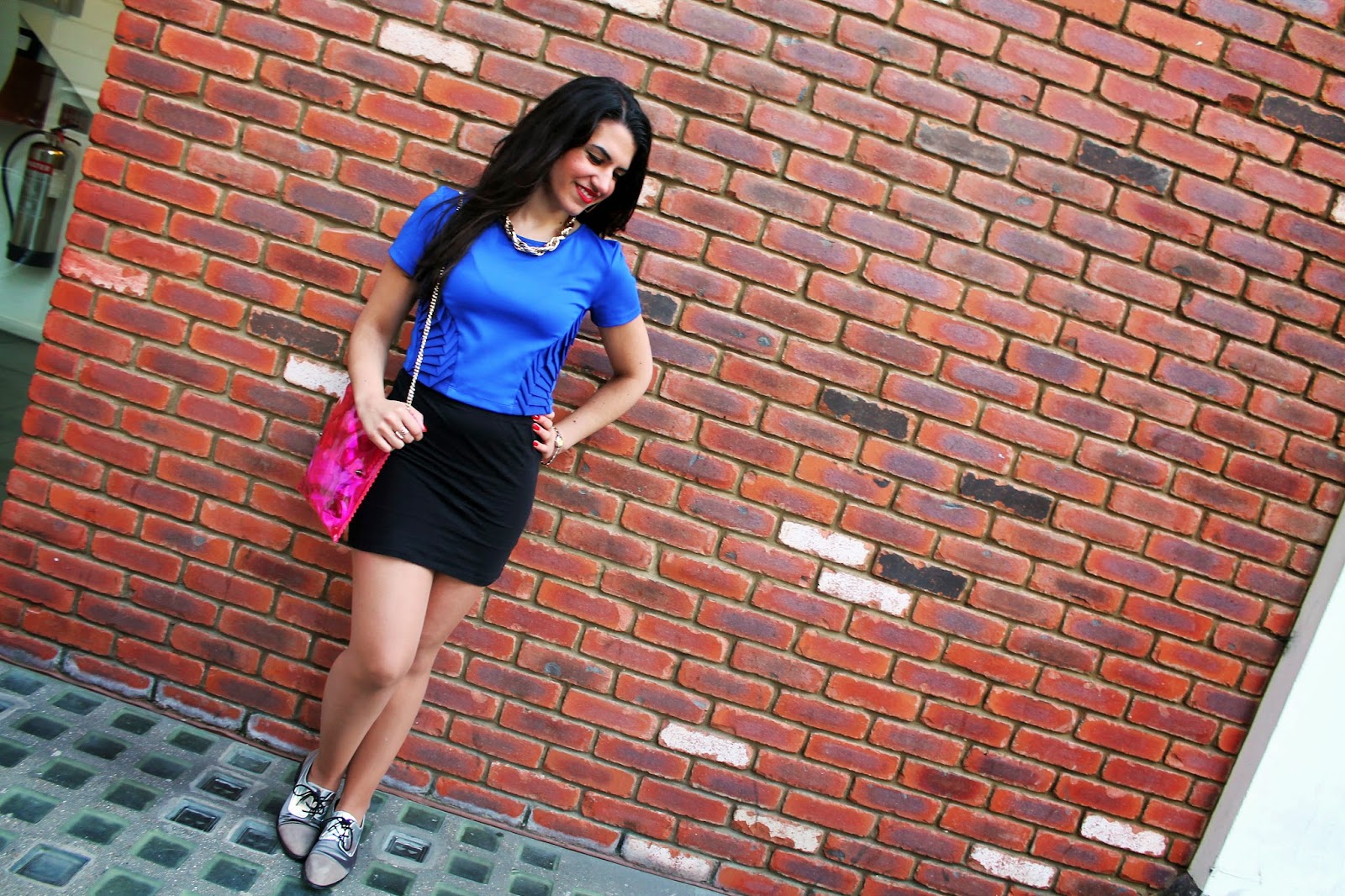 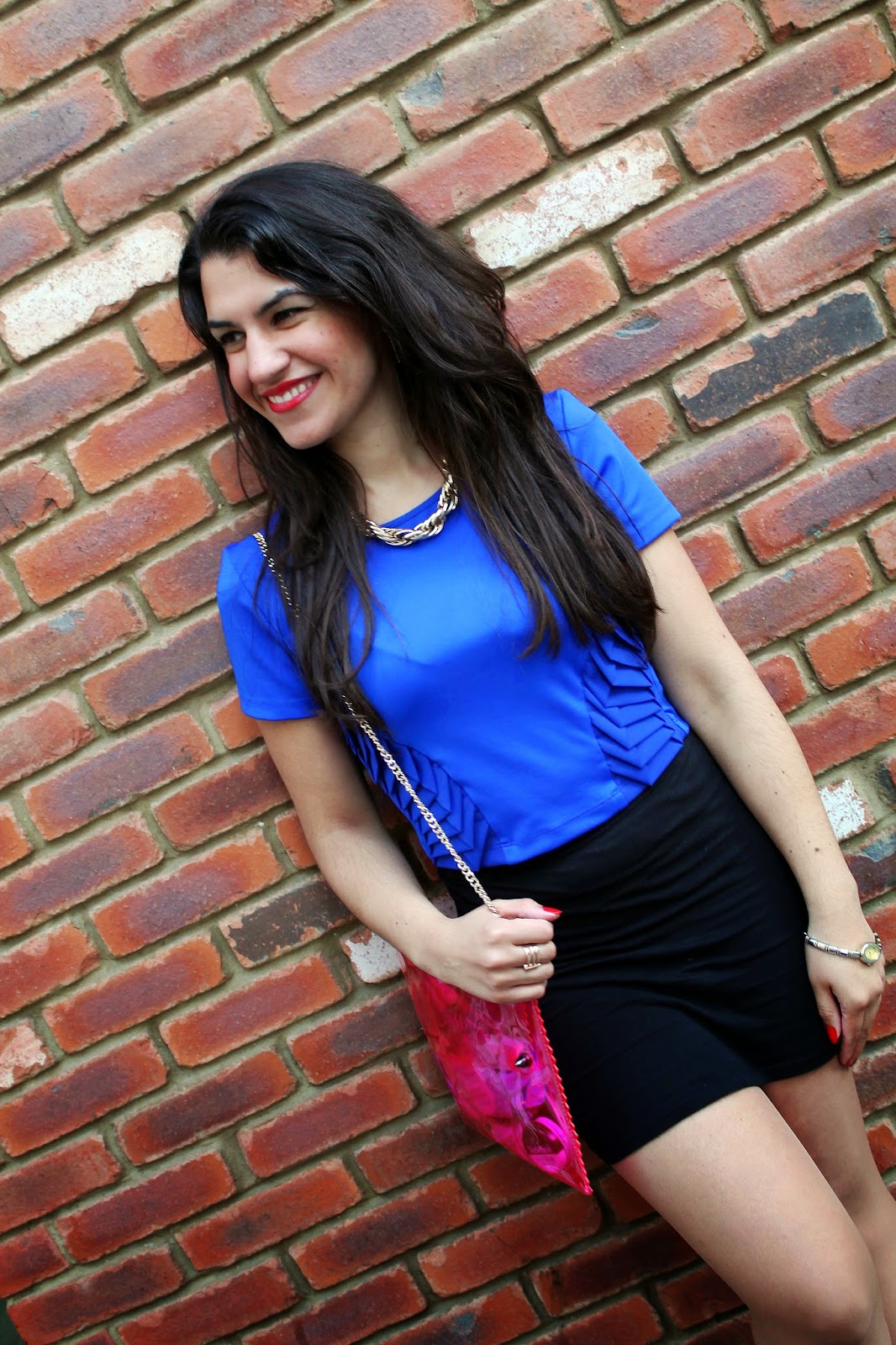 As for the amazing design in itself, it’s part of River Island’s collaboration with designer Georgia Hardinge as part of their Design Forum Range. Whilst I’d heard about the first collection coming out in SS’13, I had no idea there had been a second collaboration for A/W’13 (Shameful, I know). What I’m also surprised about is that this A/W’13 top was still around in August – I’m so lucky I snapped it up for £10! The inspiration for her first collection was H.R. Giger – the artist who inspired the super scary film Alien – a theme that was clearly continued in her second collection too. Personally the side details make me think of ribs, whether they’re human or not is another question. 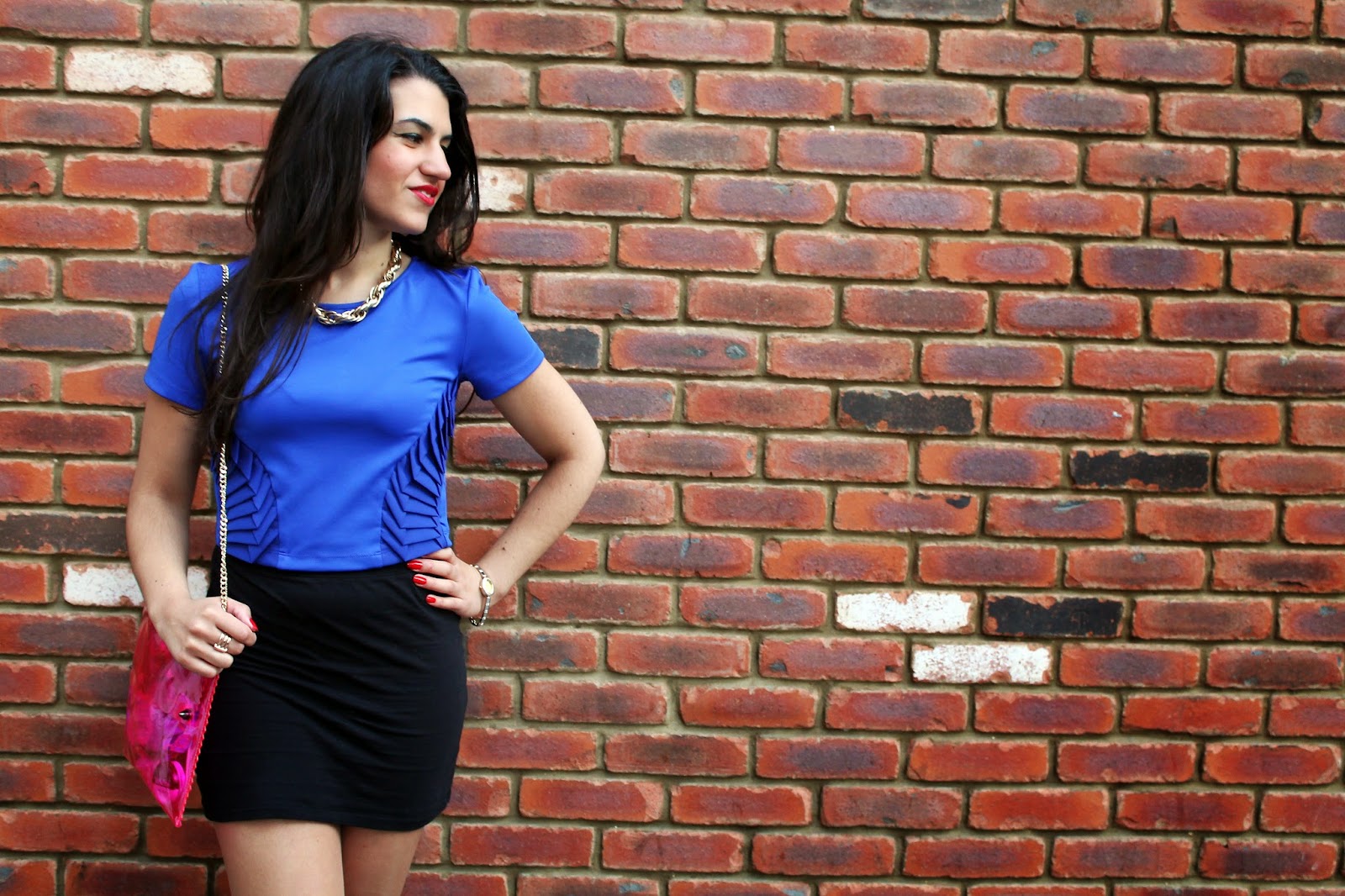 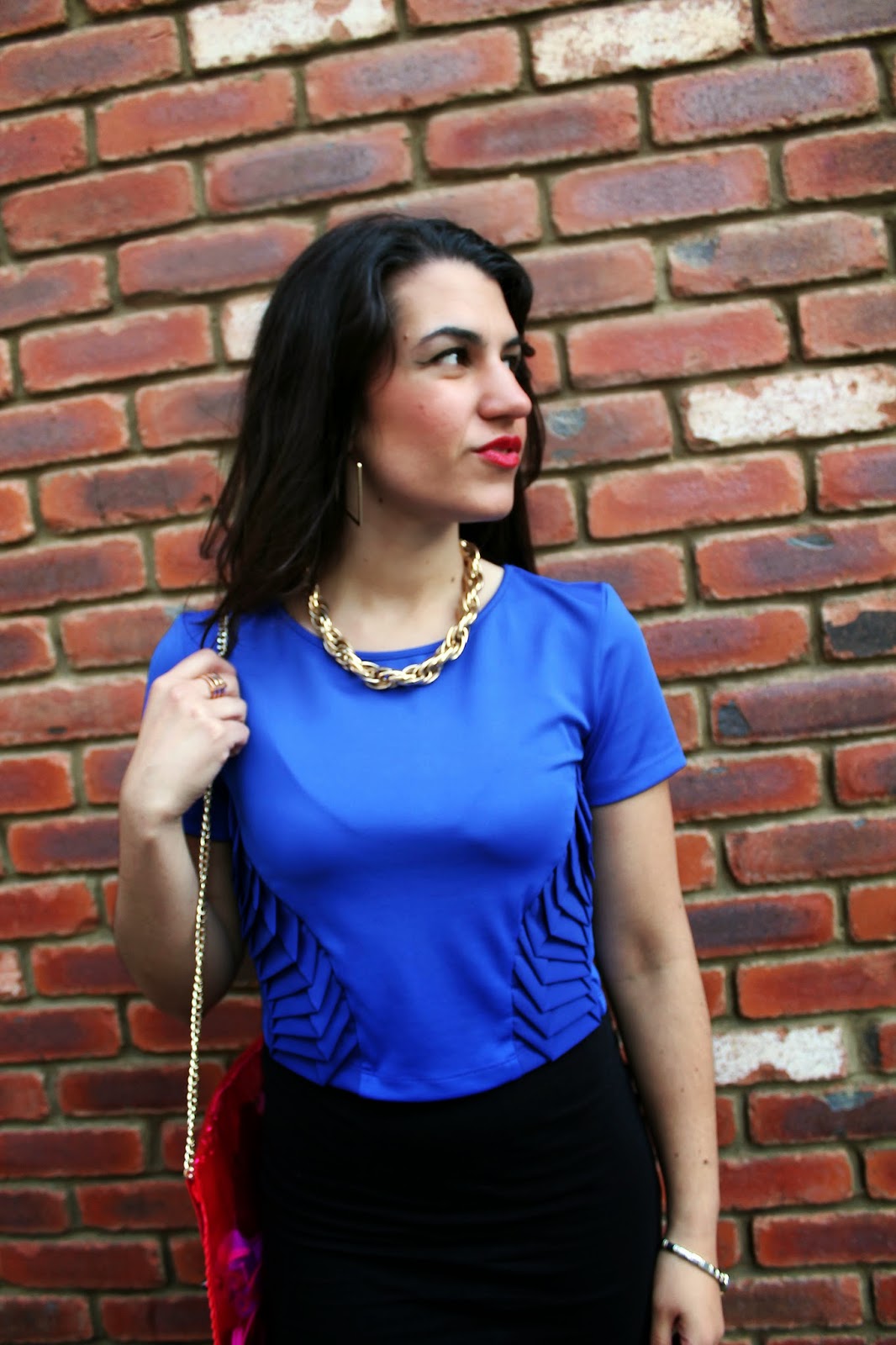 Thankfully
it’s not too cropped and it pretty much works within my most basic
outfit, the top and body con skirt combo. Next time I’m planning on
wearing it with jeans… 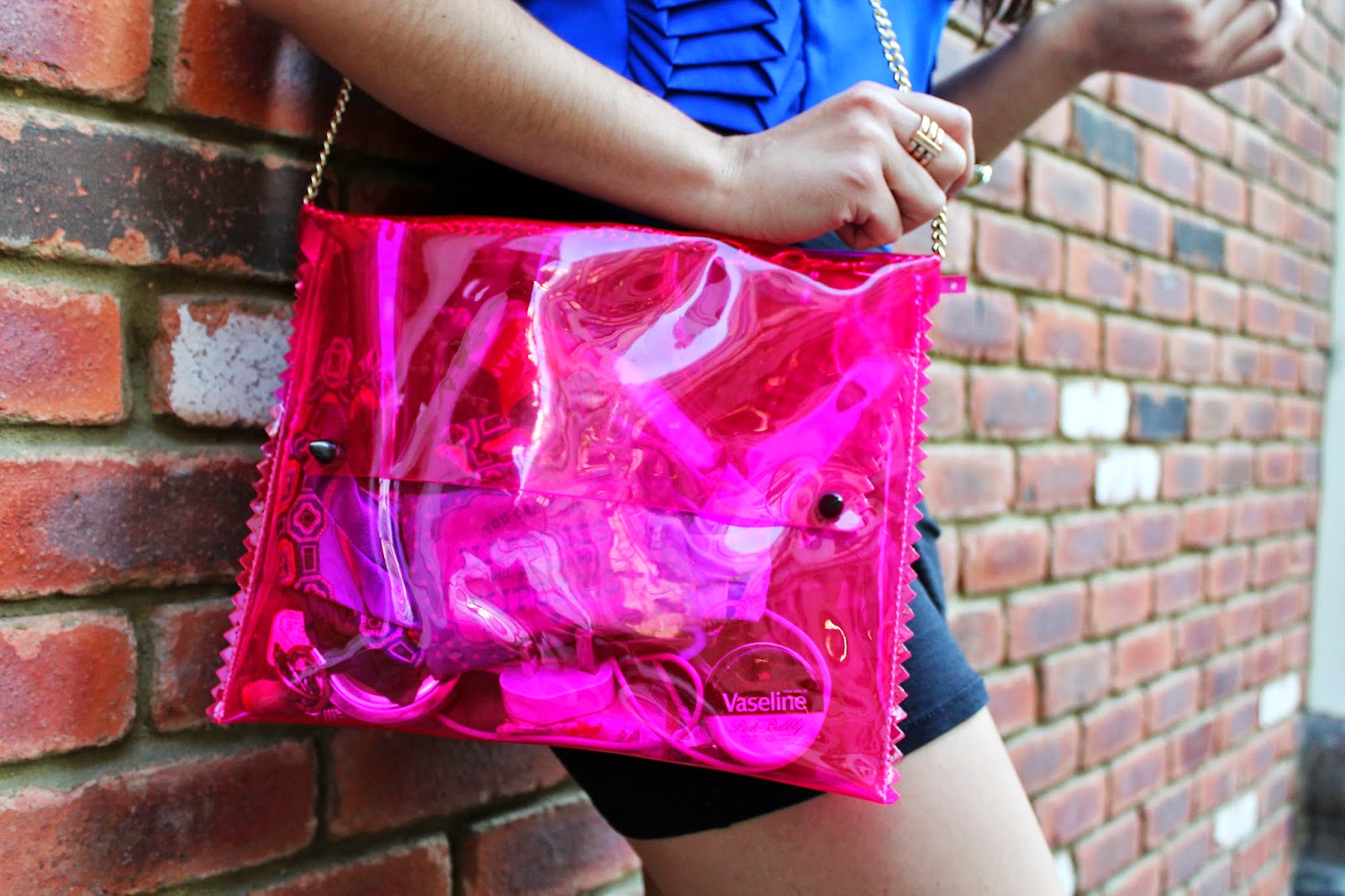 As you can see I didn’t go for a monochrome look, the subtle colour blocking was thanks to this bag. Naughty me has barely used it ever since I bought it last year, but I absolutely love it. There is obviously a side of me that’s a complete exhibitionist because I love Perspex bags. Clearly I don’t have enough secrets… 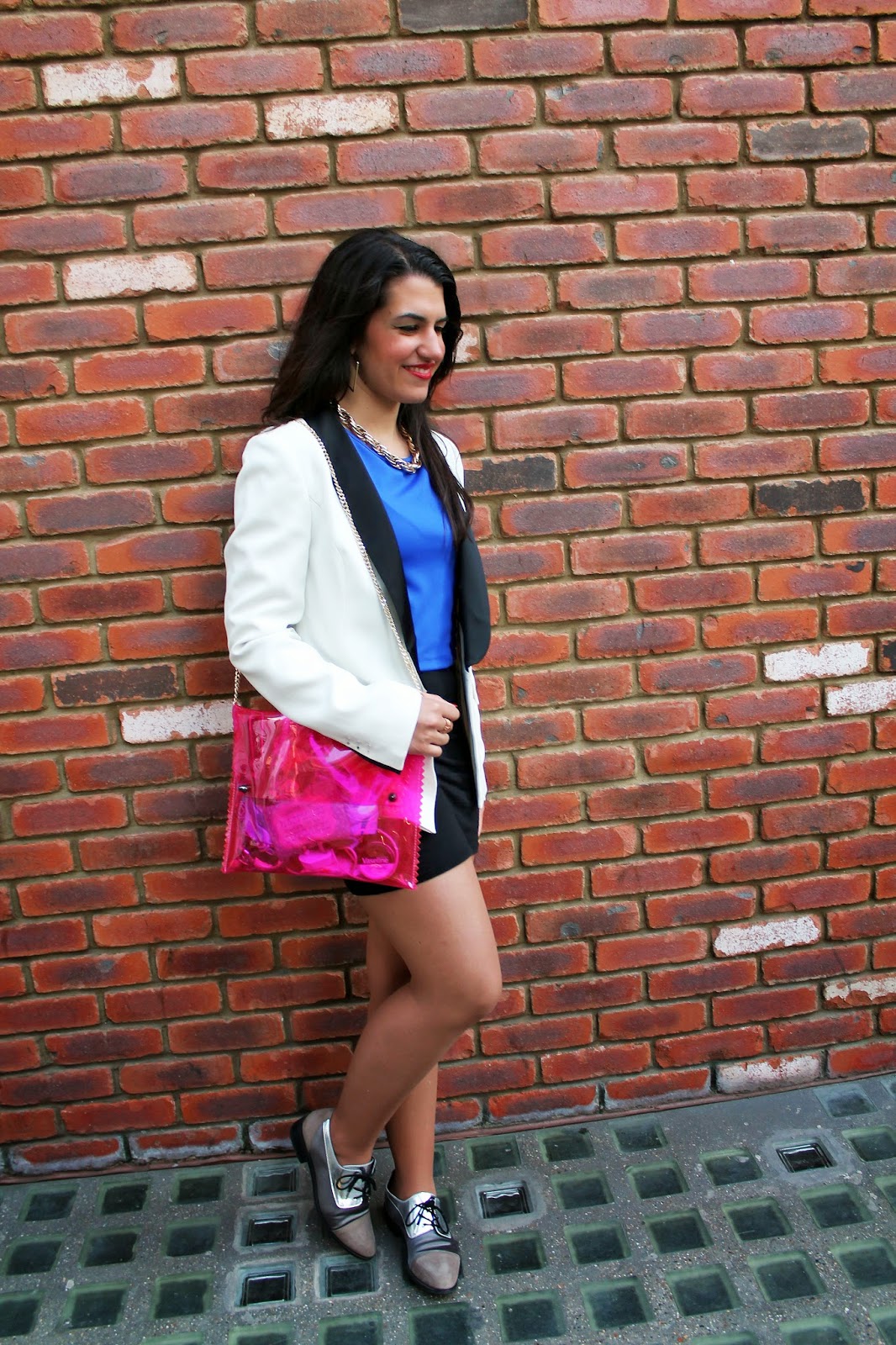 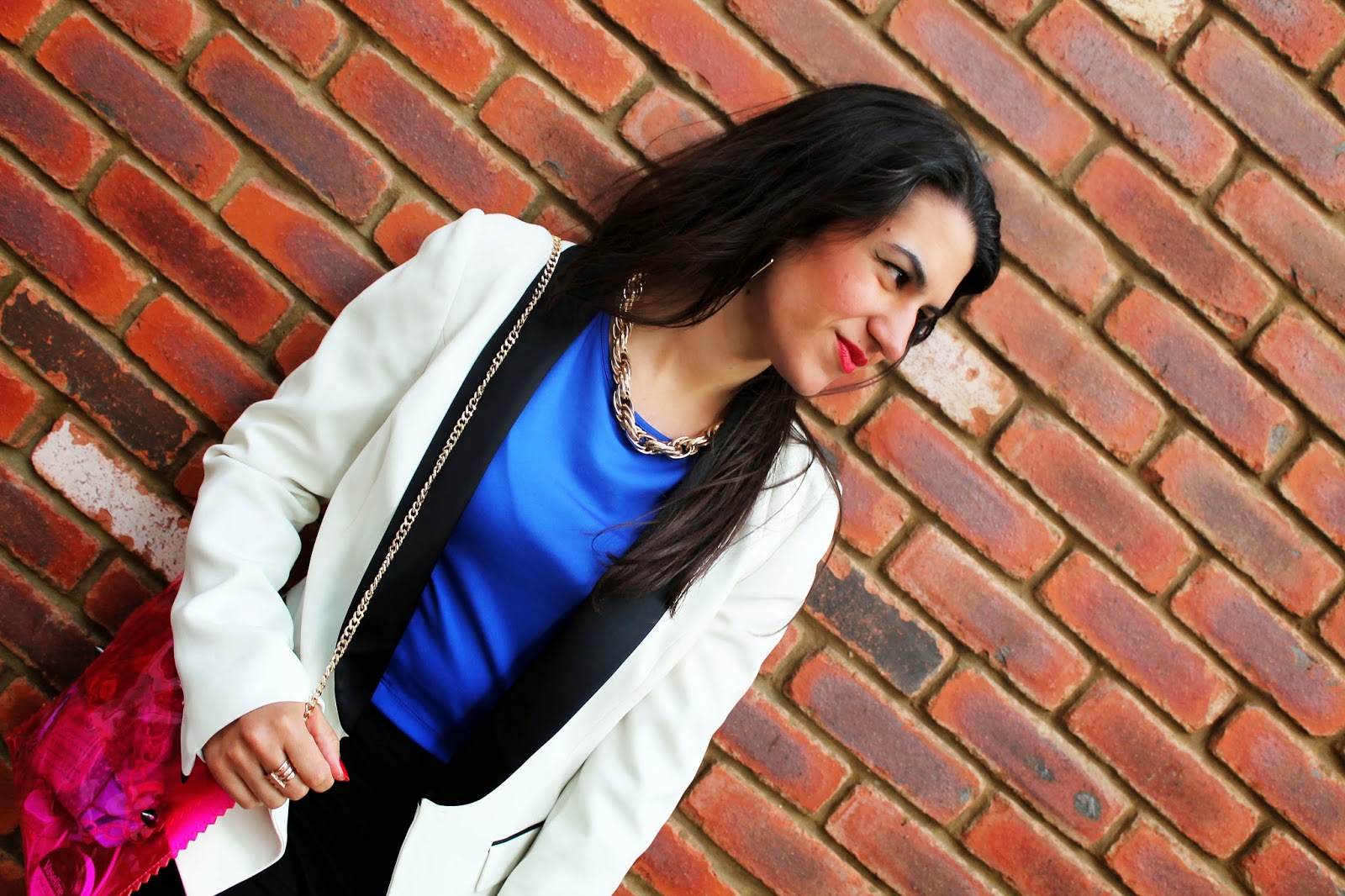 The finishing touch was this Ted Baker tuxedo – in all honesty, I wouldn’t combine these pieces again. I basically threw on the tuxedo because I felt guilty about not wearing it much – and that’s when it all went wrong. Sometimes sticking to simple, classic looks is easier for me so next time I’ll go with my plain Zara blazer or Isaac Mizrahi leather jacket. Lesson learnt! 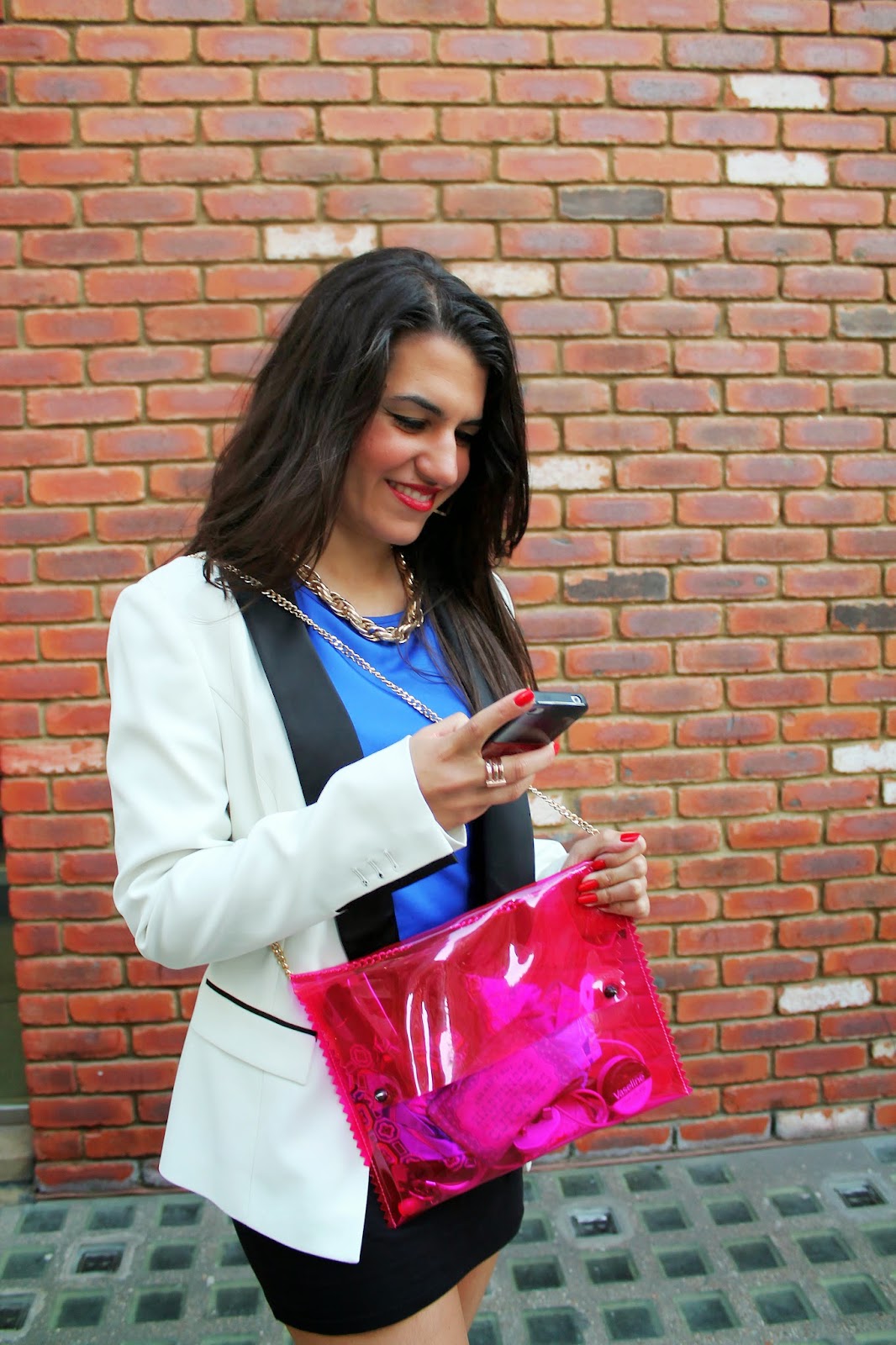 Oh, here’s a ‘candid’ shot of me doing what I do 90% of the time – being on my phone, most likely to be checking my Instagram.

This is the end of my Blue period – and by that I mean the last of my posts to be called ‘She Wore Blue’ because since these pictures were taken there haven’t been any further True Blue looks. It’s time to find another obsession…

New month, new #ootd on what was a beautifully mil